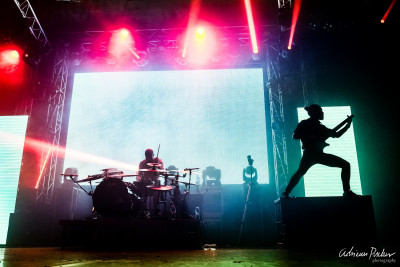 Friday nights pose an interesting dilemma for band-rich touring bills – so many good venues have a club night afterwards that a ridiculously early start is required. And so it is that even though I clamber down to Heaven’s glorious catacombs at only a little past 6.18 pm, Ukrainian openers Space of Variations are already on stage and most of the way through their set.

Fortunately, they have a decent gathering of early birds enjoying their well-executed take on Metalcore. With strong resonances of Architects, whom they’ve supported in the past, they’re simply too good to be on this early but are making the most of their first time in London. With such infectious enthusiasm, not to mention their nice line in DIY-style T-shirts, I’m sure they’ll return before too long, and much higher up the bill.

If only Fins Khroma shared that obvious delight in being here. Instead, they stroll up nonchalantly and appear to start in the middle of their sound check – never a good idea when so many folk are queuing for the bar. It’s fair to say that their particular brand of Metallic Trip Hop goes unappreciated by large parts of the full house, but sadly they don’t help themselves with the bizarre decision to place an unattended Apple Powerbook and various modules centre-stage and spot lit. While this may be an ironic statement about who really fronts an electro band, it’s terrible stagecraft. Still, at least they played with the lights on. . .

Which is more than can be said of main support, The Agonist – though I will refrain from agonising over that just yet. Well named, of course, having had to endure more than their fair share of inter-band drama in the past, The Agonist have since left their arch enemies behind them, establishing themselves as dependable workhorses with a hybrid-style of Power- and Melodic Death Metal.

I started out with high hopes here, expecting the band to touch the heights of Lacuna Coil or long-time tour-mates Amaranthe; but sadly they don’t come close in a set that feels like one flattened, templated number after another, with any sense of dynamic destroyed by the baffling passion-killer of a drum solo barely 20 minutes into the programme.

Ironically, this is the only time we get to see any member of the band clearly, with most of the group in semi-darkness for most of the set – even singer Vicky Psarakis is glimpsed only occasionally in about two Samsung’s worth of pale-yellow side lighting.

Clearly channelling Cristina Scabbia – the same “Fuck Yeahs!”, the same cheesy wordplay one-line intros, the same (when we can see them) power poses – tonight Psarakis falls well short of the great Italian vocally, her initial grinding gear changes between Death and Clean and some mis-pitches suggesting IEM problems, though she does improve noticeably as the evening progresses.

And then, it’s over. . . kind of before it’s begun. There’s no encore featuring their celebrated, if atypical, cover version of ‘Take Me to Church’ which, on tonight’s showing, is still the best thing they’ve ever done. However, we do at least get to see all the band in some light at last. . . but only for a fleeting on-stage we-fie. . . and with their backs turned to us. A suitable metaphor for what has gone before perhaps.

And just when you thought it couldn’t get any darker. . .

Visa problems having prevented a visit to the UK in February, Jinjer take the stage at the end of a hugely successful year of almost constant touring, festivals and two albums, Micro (I refuse to call it an EP) and Macro, that has established them as major headliners.

It’s been a long wait, but we have to wait just a little longer. . . 10 minutes and counting according to steampunky video clock on the backdrop; but as 00:00 cranks up, they are true to their word, rushing the stage and bursting into ‘Teacher Teacher’ and ‘Ape’ (two of the most challenging tracks from the brilliant Micro) which bookend ‘Sit Stay Roll Over’.

And it’s some kind of glorious. My immediate response is that this not just playing leagues ahead of anything else I’ve heard tonight, it’s from another planet. The textures, the layers, the intricacies, the details in their music are just breathtaking. It’s proggy, groovy metal played at a level to match Dillinger (RIP) at their very best. And when they borrow from other styles and genres, they make them their own: when Jinjer play djent, it’s their version of djent, not Meshuggah’s.

And yet. . . and yet. . . all of this take place in the darkest dark you can imagine. You know that old expression about trying to find a black cat in a black room with the lights off? Well this is that room and, raven-haired singer Tatiana Shmailyuk, dressed from head to toe in black, is that cat.

I exaggerate, but only a little. There is of course a little backlight from the scratchy abstract video, rolling at the back; later this becomes pure white light that transforms the Ukrainians into a cast of shadow puppets – a beautiful moment resonant of a Metal Madame Butterfly. Guitarist Roman Ibramkhalilov catches a red-light rim now and again, as does Shmailyuk, leap-frogging mini-risers that are inexplicably neither uplit nor downlit. And then there are the strobes. . . batteries of them that pummel the retinas into submission, until by the final third, I am having to close my eyes to listen such is the strain of the rapid fire.

So yes, there is light, but there is no illumination. . . Alienation instead of clarity. . . An opaque performance in which meaning is obscured rather than amplified simply because we can’t see the singer’s face, let alone her eyes. And sadly, this does impact on some of the songs, with even the exceptional ‘Perennial’ dulled by a perennial penumbra.

And yet. . . and yet. . . cutting through all this, rising above it triumphantly, are the mesmeric voices of Tatiana Shmailyuk, a true queen of the night. For once, comparisons with Kate Bush are not misplaced, because the way she switches from Death to Clean in the raise of an eyebrow is something akin to vocal alchemy such is its seductive power. You feel there is nothing Tatiana can’t do with her voice: out-growl Julie Christmas, leap one note higher than the great Minnie Ripperton, beat Eminem in a rap battle. 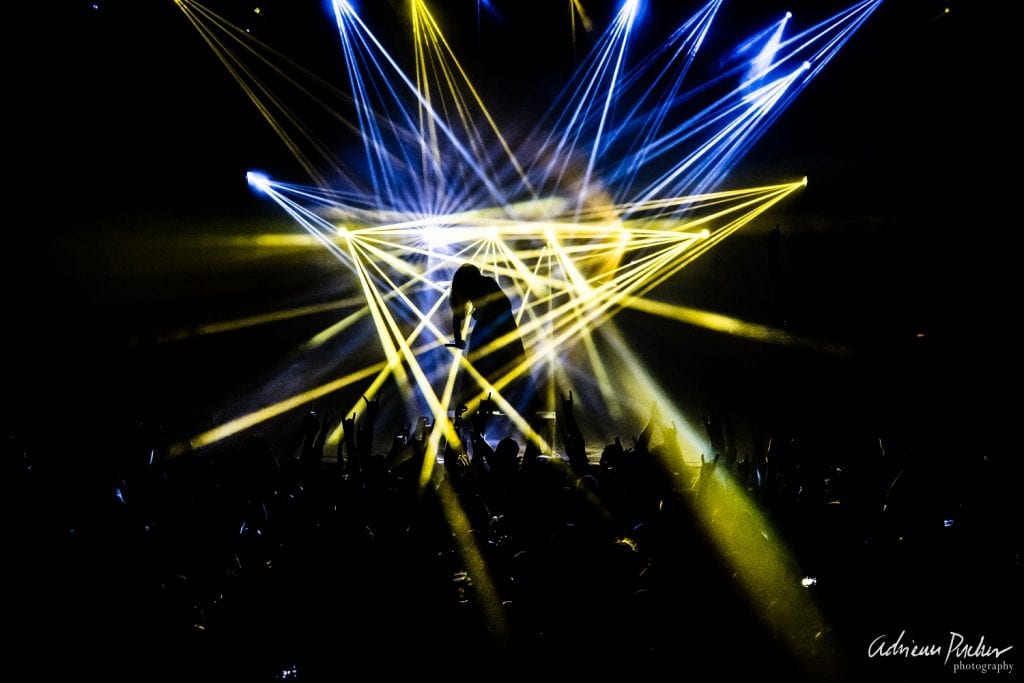 But there’s more, because she keeps up this sonorous sorcery from song to song with never a stumble, not even a suggestion of a step-back on landing. Nothing can phase her, not even the crazy Kerplunk yellow & green-laser gridlock that imprisons her during the last few numbers, cutting her adrift from the rest of her crew long since lost in the inky horizon.

The end comes, aptly, with ‘Words of Wisdom’; but no evening with Jinjer could possibly be complete without their signature, their prog-length elevator pitch, ‘Pisces’, which they return to in a well-deserved encore only slightly marred by the first flaws in the otherwise faultless sound setup. Tonight, the fish proves to be grilled trout rather than steamed, but it’s still a Michelin star of a song, and the only possible, irresistible, end to the evening.

It’s been a good night in Heaven, but, given the ratio of frustration to inspiration, not quite a great one. And while I may have some contrary feelings about Jinjer’s direction – Micro really is a much more interesting record than Macro – I have no doubt they are marked for greatness. Metal may not be dying, but it is fatigued, and the cracks are obvious for all to see. Original young bands on the cusp, as Jinjer and Igorrr clearly are, can be its saviours, or at least the New Hope.

This new year places Jinjer in an almost limitless landscape: Australia, South America, North America, and more than two-dozen festivals, including Hellfest and Bloodstock, await them. To me, and many others, they are Metal’s heirs apparent – Gojira in waiting. It’s theirs for the taking; if they would only step out of the darkness and show themselves in the best possible light. . .

[Editor Update: Since this review was written, Space of Variations have been signed to Napalm Records]