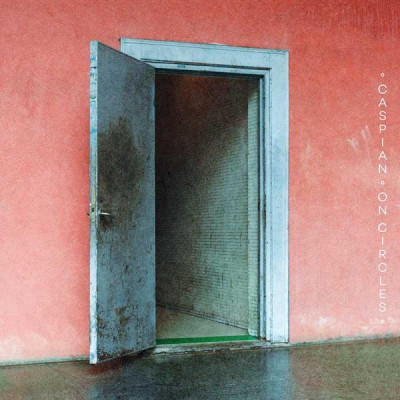 On Circles by Caspian

It has been four years and four months (yes, I have been counting) since Caspian released an album. That album was Dust and Disquiet. For the finest purveyors of soaring, climactic ambient rock music to ever come out of Beverly, Massachusetts, it seemed to be, following the sudden and tragic death of founding bassist Chris Friedrich in 2013, an absolute catharsis of a record. For those who had passionately followed the band since their debut EP You are the Conductor in 2005, it sounded magnificent.

Caspian had finally been able to capture on record the alluring depth and visceral intensity of their live shows. They had also significantly broadened their sonic palette, with a first confident step into vocals in the shape of acoustic lament ‘Run Dry’, sitting beautifully alongside the harder, black metallic tone of ‘Echo and Abyss’, the jaw-dropping, monumental blitzkrieg that is ‘Arcs of Command’, and the lush, widescreen soundscape of the epic closing title track.

To follow what for many was the best experimental rock record of the decade was going to be a real challenge. And based on the revealing and extensive commentary made by lead member Philip Jamieson (Guitar, Keys), this appears to have somewhat been the case with new record On Circles. For example;

“I’ve grown weary of reading about bands discuss the renewing, rehabilitative properties their most recent album has had on them. They incur corrosion, come close to running out of gas, descend into the dark abyss, and finally emerge on the other side with a record that has given them a crystal clear perspective and a confident path forward. On Circles is not that record.”

“They’re just songs that we got together and wrote over the course of a year while trying to have a good time and reclaim whatever it is that’s simple about all of this. Don’t get me wrong, we kicked our own asses constantly and stayed up staring at the ceiling thinking about song structures all night for a year here … but being free from the yolk of having our music relentlessly try to answer the unanswerable was emancipating and humbling.”

What is abundantly clear from the first listen to On Circles is a harsher, denser, less grandiose sound than the last couple of records. Guitars are often strident and riff-heavy, the rhythm section is complex and thunderous (with new drummer Justin Forrest putting in one hell of a shift), while electronics whirl and fizz in the background. It is unmistakably Caspian, Jim, but…

Anyone that has seen Caspian live in the last 12 months or so may have already met with the opener, ‘Wildblood’, which has served to launch many of their sets in that time. As a reference point, both it and the following ‘Flowers of Light’ have most in common structurally and sonically with ‘Darkfield’ from the previous record. In the way that bleak, disparate tones are melded and propelled together into an enveloping, cacophonous whole. But this time around the journey to full bloom is accelerated and delivered with furious fervour. And with added saxophone! (‘Wildblood’). It is quite the opening double salvo, and there is so much to take in.

A perfect move, therefore, to bring ‘Nostalgist’ next. As the title hints at, it is wistful and longing in tone and theme, and features, for the first time on record, a guest vocalist. Kyle Durfey, from Baltimore’s post-hardcore act Piano Becomes The Teeth, delivers wonderfully, accompanying that strikingly familiar, off-kilter steel guitar sound that adorns much of Caspian’s most recent output. Calling to mind the emotional storytelling of mid-western bands like American Football and The Appleseed Cast, the track builds and swells majestically, and if long-time fans are looking for one of those spine-tingling, misty-eyed moments, you will find it mid-song here, undoubtedly.

We’re then into the smouldering, side-stepping sprawl of ‘Division Blues’, which is one of two tracks on the record to include the work of virtuoso experimental cellist, Jo Quail. This one has a cascading, downscale riff as its central theme, and builds in exciting, familiar fashion, before mouth-wateringly breaking down on multiple occasions. When the rush comes, which it inevitably and joyously does at the 5-and-a-half-minute mark, it is, as is the case so often with Caspian’s music, literally breathtaking.

‘Onsra’ provides, with the help of that agreeably disproportionate analogue synthesiser sound, a semi-ambient, upbeat jaunt towards what you might, on first listen, believe to be the mother and father of crescendos. Only it is cut off mercilessly in its prime, which is something of a playful habit for Caspian, to be honest. The title track from Waking Season, anyone?

No matter, for what comes next is the crushing, colossal ‘Collapser’. As well-named as ‘Arcs of Command’, and with a similar sonic arsenal, it is half the length and delivers the beautiful payload of Caspian at their heaviest. You know, the type that you are looking up into the sky and waiting for, rather than the one that has you quivering in your underground bunker. The riffs are explosive and enormous, the drums sound like they are being relentlessly pounded by tree trunks dropped from fifty feet, and Jani Zubkovs’ bassline is filthy and full-figured. Not content with the maelstrom they have created, Caspian’s (up to) four guitarists soar and squeal and bleed all around it. Wow.

The remaining two tracks on the record represent further departures for the band. One, in the form of ‘Ishmael’, quite literally as well, as it was written by guitarist Erin Burke-Moran in recognition of his eight months away on the Appalachian Trail. The first part of the track is ghostly and windswept, with Quail’s cello very much taking centre stage, accompanied by violin and delicately strummed acoustic guitar. Slowly, tantalisingly, additional elements are introduced, in a similar way to the glorious build that occurs during ‘Gone in Bloom and Bough’ from Waking Season. Wispy, rippling synths join burgeoning guitar and drums as Caspian glide effortlessly through the gears for yet another truly memorable epic.

The final word is left to Jamieson himself, as he takes clean vocal duties for the first time in the closing, acoustic-led ‘Circles on Circles’, a brooding, tremendously effective tale of some of the existential despair that Caspian went through in the years leading up to the making of this record. “Here and now through drifting days. Collisions in red, black, blue and grey. Bend, then collapse, eventually. We all submit. We all deceive”.

‘On Circles’ may not grab you immediately. In this bewildering daze of multi-platform streaming and instant gratification, it is becoming increasingly difficult for any record to grow with its listeners, before they’re off towards next Friday’s new releases. So take yourself out of the shallow stream for a time and fully immerse yourself in the enticing depth and considerable expanse of this record. It will truly reward multiple listens, as you become more and more familiar with each circuitous intricacy and overwhelming deluge. Yes, Caspian has done it again. Only the band themselves can tell you whether it was worth all the pain and torment. But I can tell you undeniably that it was well worth the wait.