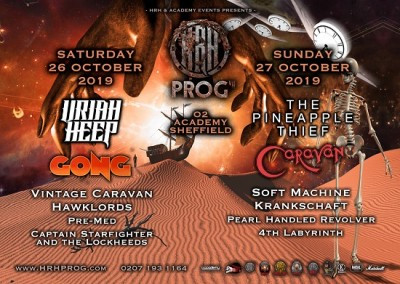 Sunday at HRH Prog starts wonderfully for those in possession of VIP tickets as holders are treated to a mesmerising set from MonkeyTrial. From the first track it’s easy to see why this trio are starting to get booked to play on bigger stages and in starry line-ups. Their blend of trippy ambient passages, sequencer tones, rhythms, and tasteful guitar overlays has always been a joy, but their progression as a live act is evident from one gig to the next. Shaun Bailey and Clive Mollart have been working together as MonkeyTrial for over 20 years, and are now making strides in live performance, due in no small part to the addition of Nick Raybould’s organic percussion. That said, there are still moments tonight when the metronomic pull of the sequenced drums, and Raybould’s more feel-based approach, come apart somewhat, jarringly.

‘Viking at First’ opens, with the still half-empty venue somewhat resonant, MonkeyTrial’s majestic sound enveloping those present. ‘Comma5’ and ‘Proteus’, by comparison to their studio equivalents, serve to demonstrate how this trio have developed, both stretching out in new directions and ‘Proteus’ in particular kicking harder than before. Although Bailey and Mollart have recorded two live albums with Delphini’s Rod Novery, this current incarnation have yet to be committed to record. On tonight’s basis, a new live document, at least, is overdue.

4th Labyrinth follow, injecting both pace and energy into the now fully open Academy, doing no harm to their growing live reputation. The classic-rock oriented Cambridge band have a full sound and catchy songs, at times reminiscent of Deep Purple. 4th Labyrinth, who populate their set with tracks from 2019 LP Better, are a colourful visual proposition, too, and compensate for lynchpin Marcel Kunkel’s sometimes necessarily static performance, stuck behind his keys, largely thanks to the energy of bassist Claudia McKenzie, who throws herself into each tune in a visceral performance in which she never misses a note.

Pearl Handled Revolver, not a prog band in any traditional sense, possess a distinct psychedelic blues style and are a tight live ensemble. The perennial HRH favourites play more than half of Fantasy Reigns, their latest, and the record develops on the group’s existing template nicely, making for a decent set, with the murky, deep musings of ‘If the Devil Casts his Net’ a standout. No doubt the group win themselves more fans based on another strong showing.

Krankschaft perform the role Hawklords were tasked with on the Saturday: to signal the start of the day’s premier league of bands. Like Hawklords, the group have built up a fine set list of tracks that nowadays ensure they’re treated on their current merits, and not on former glories. Not everyone present seems to quite know what to make of the group’s quirky, sometimes confrontational humour that’s reflected through vocalist and guitarist Steve Pond’s zany lyrics, and also via a “light show” that combines their futurist philosophy, surreal humour, bitchy swipes at today’s prog scene and much more. Eventually Krankschaft’s punky space-rock wins out, and the closing quartet of ‘The World is Flat’, ‘Moon’, ‘Binary Star’ and ‘Who What Why?’ are well executed and warmly received.

After more than 50 years in the game, Soft Machine shouldn’t need to convert anyone, yet it would appear many in the audience are encountering their psychedelic jazz experiments for the first time tonight, with one punter confessing to this journalist that they’d previously avoided the group on the basis that their name suggested they made flimsy music. 2019’s Soft Machine are characterised by the group’s adventurous nature; old and new tracks are reimagined with breath-taking solos from guitarist John Etheridge throughout.

‘Hidden Details’, the title track from their most recent album, demonstrates a band able to match their various 70s heydays, kicking off with a chiming, tonally ambivalent guitar part which provides a jump off point for fluid sax stylings from the talented Theo Travis, before Etheridge takes turns with jaunty solos underpinned by Roy Babington’s walking bass, then legato-picked lightning runs that would be widdling were the harmonic content of each not so fresh. Classic tracks are despatched with similarly little restraint, all the while Babington and drummer John Marshall holding things together. Although the set loses a little momentum, it’s met with the rapturous reception it deserves.

Soft Machine are followed by another band who have come a long way since their 60s routes in The Wilde Flowers and the Canterbury scene. Caravan arrive at HRH in Sheffield the night after The Vintage Caravan tore the place to pieces. This vintage Caravan, as opposed to their younger namesakes, take a more sedate route to achieve their aims, but are no less effective. Two tracks from Girls Who Grow Plump in the Night are warmly met, before the whimsical ‘Golf Girl’ provides the first real singalong moment of the day. It’s the first of several tracks from the band’s third album, In the Land of Grey and Pink, each of which is met by cheers from a misty-eyed crowd, young and old. ‘Dead Man Walking’ proves the band are still capable of memorable music this millennium, too.

Jeffrey Richardson, ostensibly the group’s viola player, excels at more instruments than anyone else in prog, with his spoons solo possibly his show-stopper in another brilliant performance. During the closing epic ‘Nine Feet Underground’, he duets with Jan Schelhaas’ organ as the two trade licks, before bassist Jim Leverton leads the crowd in the track’s final singalong section, and a rousing coda wraps things up nicely.

Whilst there are many in the crowd who have primarily come to see The Pineapple Thief, it would appear there are many more fans of 70s prog present with at best a passing familiarity to this evening’s headliners. Whilst this doesn’t materially affect Bruce Soord and his gang’s offering, some technical difficulties for guitarist George Marios do have an impact, and the venue naturally empties a little, the band only drawing the focus of a percentage of those who remain. Those who do pay attention are treated to a fine display of modern-day progressive rock with perhaps the highest degree of professionalism of any ensemble over the weekend.

It’s necessary to remain focused to fully appreciate Soord’s song writing, as whilst his output is popular, his aren’t melodies for whistling on the bus; and with themes ranging from isolation to alienation, it’s not exactly easy listening. The Pineapple Thief focus largely on 2018’s Dissolution and its more proggy predecessor Your Wilderness, both of which provide stand-out moments: the former’s brooding ‘Uncovering Your Tracks’, and the latter’s haunting ‘The Final Thing On My Mind’, which ends the evening, being just two. All their songs are brought to life by a band that includes drum virtuoso Gavin Harrison, who never overplays, in spite of his technical prowess.

Thus ends another year for HRH Prog. The next edition sees Dave Brock and Rick Wakeman top the bill, in spring, before Colosseum headline at the 10th edition, scheduled for October. Perhaps losing a little atmosphere and some of the camaraderie of a chalet festival, it’s otherwise business as usual, then, for this musical mecca, and what do you know, the holy land just got that little bit easier to access for fans of progressive music living in England.