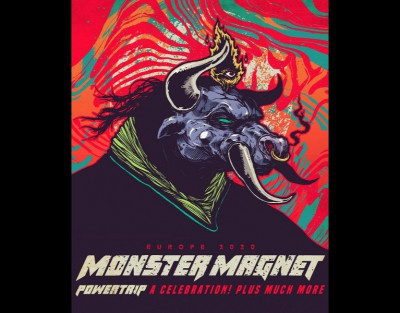 After last year’s European summer-tour cancellation due to vocalist and founder Dave Wyndorf having to undergo tonsil surgery, it is a relief to have the heavy sonic space-groovers Monster Magnet roaring back.

Let’s be honest, Dave Wyndorf is to Monster Magnet what Lemmy was to Motörhead, and Dave Brock is to Hawkwind. It is inconceivable to have those bands without their talisman. The same goes with Monster Magnet. So, to have Dave and his fellow space-trippers back looking and sounding on top form, as they are tonight, is a sight to warm the cockles of this old fan’s heart.

They arrive on these shores to start their European tour with a celebration of their legendary Power Trip album. This album’s success led the band to have a brief flirtation into the mainstream world of MTV broadcasts and the US Billboard charts. It saw them streamline their expansive, mind-blowing heavy psych-rock into a straight-ahead set of horn-raising, yelling rousing Rock ‘n’ Roll bangers, without compromising any of their heaviness.

It is indeed a heart-warming sight, seeing Dave emerge on stage picking up his guitar and wielding it in the air. It’s a victory salute alright; he’s back and you just know the stage is set for the magnificence of Monster Magnet. After the surprise opener “Atomic Clock’, they explode with a blistering ‘Tractor’ and so begins the first of many audience participated singalongs. Dave is definitely in the mood as he proceeds to command from the front; smiling, arms aloft, pointing, hands shimmying and waving, as the band tear through a re-shuffled order of the majority of Power Trip.

Whenever a band focuses on a specific album, deeper tracks can turn out to be tremendous: ‘Temple of your Dreams’ is huge; ‘3rd Eye Landslide’ and ‘Bummer’ are also welcome hearings. And as for the indisputable crowd pleasers, ‘Crop Cycle’ goes down a storm while the two memorable classics ‘Power Trip’, and ‘Space Lord’ finish the main set. The last two songs, of course, never fail; and there is good reason, because they’re absolute belters. How can anyone resist ‘Power Trip’s, “I’m never gonna work another day in my life / the Gods told me to relax and your gonna be fixed up right”? Especially on a Friday night while Dave hollers the line showcasing a middle-fingers salute – it’s pure Rock ‘n’ Roll showmanship, and we bloody love it. And indeed, join for some uproarious bellowing along to ‘Space Lord Motherfucker’.

Of course, for many Magnet fans, Power Trip is the favourite. Personally, Dopes to Infinity just edges it for me – so as much as I enjoyed the detailed attention to Power Trip, I did miss the heavy psych blowouts from Dopes and the still stunning debut, Spine of God.

But this is a minor grumble, because the four-song encore compensates with Superjudge’s ‘Twin earth’, a rollocking cover of Robert Calvert’s ‘The Right Stuff’, and the heavy stomp of ‘Look to your Orb for the Warning’, before the rightful closer, ‘Negasonic Teenage Warhead’, seals a triumphant and most welcome return.