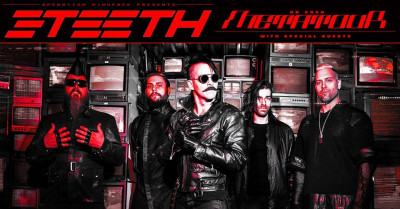 “This place is no Electrowerkz but it’ll do,” announces 3TEETH mainman Alexis Mincolla as he takes to the stage, referring to their album release show at the club in Angel last year. 2019 was a good year for the band, given that their album Metawar went straight to number one in the iTunes metal chart whilst on their tour supporting one of the biggest names in industrial metal, Ministry no less. Echoes & Dust spoke with Mincolla after their Shepherd’s Bush show, and he emphasized the band’s hard work-ethic alongside their hedonism during other prominent tours supporting heavy weights like Tool and Rammstein. So it’s great to see them on tour in the UK again, very much building upon success of last year’s incendiary live shows.

<PIG>, aka Raymond Watts of KMFDM fame, may also be one of the most influential industrial outfits around – certainly from the UK – but they’re probably one of the most under-acknowledged, and they’re supporting for this tour. Mincolla offers the band serious praise at the end of his set, emphasizing that 3TEETH wouldn’t be able to do what they do without them – so really it feels like a co-headlining show.

This is the first time I’ve seen PIG (although I recognize charming ditties like ‘Find it Fuck it Forget it’ and the KMFDM cover ‘Juke Joint Jezebel’) and I’m so pleased I made it here in time for them. If the sloganeering choruses, big beats and groove-metal riffs sound a little old hat, it’s because they crafted the damn hat back in the 1980s, with Watts having toured with every name of note on the scene.

Samples, crazy cover versions and provocative visuals have always been a part of industrial music, and a PIG set is rammed full of surreal interludes – K.C. & The Sunshine band covers, millenarian preachers, riot police, sleazy back streets, poverty, financial crashes and corrupt leaders. Watts’ vocals take on Al Jorgensen, Marilyn Manson, even Primus, whilst almost pre-dating the lot. They’ve got the stage presence, the killer riffs and the brain-bashing beats, without forking out £30+ for the privilege.

Following a joyously eclectic inter-band playlist taking in the predictable (Ministry), the crowd-pleasing (White Zombie) and the simply excellent (Tom Waits!), 3TEETH enter dramatically with the fist-punching awesomeness of ‘Hyperstition’ – although the guitarist’s cable isn’t connected so it falls a bit flat. This would be embarrassing for most bands, but Mincolla basically sweats charisma so he casually (and politely) calls for his band to restart: “No guitar? You know what that is? EBM? No way. You’re getting Nu Metal.” And they’re instantly owning it like nothing happened, a state of control that only improves over the course of their set, covering the majority of METWAR and <shutdown.exe>, and a couple from the self-titled debut.

Again, Heaven provides such a great space for 3TEETH, with razor-sharp, perfectly-cut visuals, lasers and a layered stage that Mincolla really seems to enjoy – looking every bit the effortlessly cool rock god, even with a bright blonde Mohican. The pounding beats of ‘EXXXIT’ sound huge and gut-worryingly deep, but – Mincolla’s right – those ultra-low riff sounds are some of the heaviest going. Pumping out killer track after killer track (‘Dehumanize’, ‘Shutdown’, ‘Sell Your Face’, ‘Operation Mindfuck’), it’s all one big heaving mass of raving, jumping and moshing, with the pace only eased a little by the excellent Manson-esque dystopian synth-ballad ‘Insubstantia’. “No more slow jams!” Mincolla announces, “I have a basic idea: let’s, tear, this, place, apart!” In a magisterial feat of heaviness, 3TEETH play a finale triptych of ‘Time Slave’ (like a long-lost and souped-up Fear Factory out-take from Demanufacture), ‘Tabula Umbra’ (like being trampled by a T-1000) and ‘Master of Decay’ (like a direct hit from the Death Star).

But that’s not all. Who is this sharp-suited figure emerging onto the stage, hiding his face behind a towel? A Central London crime lord? James B(l)ond? No, none other than the latest manifestation of the Anunnaki, Ickean lizard-lord himself, ‘President X’. (Strange, that shock of yellow hair sticking out of the back of our leathery lizard’s face looks oddly familiar. . .)

While it’s perhaps true that 3TEETH have yet to release an album that radically reshapes the landscape of industrial metal, their sheer quality transcends mere pastiche, making for an almost perfect example of the genre, and one need only see them live to understand why they’re so popular and how they’ve risen so rapidly.