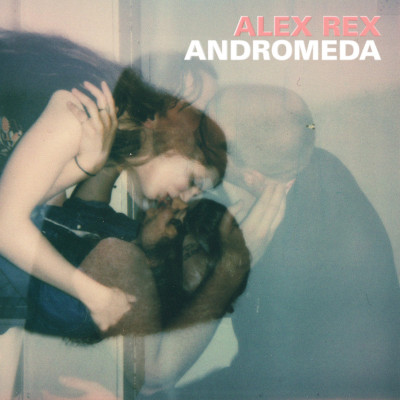 Whilst there may still be some of us still bemoaning the demise of Trembling Bells, it’s of great relief to continue to receive the great music and lyrics of Alex Neilson via his solo releases as Alex Rex. With the freedom of being solo, there also comes an increasing exploration of different styles of music, albeit all wrapped up in that glorious vocal style of his. Through all this are the sort of nuanced lyrics which you have come to expect, draped in emotion.

Emotion is a keyword to understanding the music of Neilson. Previous album, Otterburn, was a grief filled cathartic journey, brought on by the sudden passing of his brother. Here on Andromeda, that grief is suffused with a kind of manic anger and weariness as he tries to make sense of a world which no longer feels like it is safe. It’s an album which ties in with a world which currently feels like it is rocking on its very hinges. Take the sea-sick sway of ‘I Am Happy‘, which gleefully throws its weight around to a point where it feels it may just cut loose from the very surroundings of the album. At the point where it dissolves into ‘Funeral Music for Alex Rex‘, you simply know that you are in for a rather wrought experience.

Underpinning this grief stricken fear is a wry sense of the absurd. Only Neilson could use his own funeral as inspiration to leave his body and perform an out of body exorcism on the world below. That it doesn‘t tip into some sort of Poe-esque Grand Guignol is nothing short of remarkable, although there are definite shades of early Alice Cooper in those wonderful call and response choral vocals.

Of course, it wouldn’t be an Alex Neilson album without the kind of wry observations that made Trembling Bells such a wonderful band, and on ‘Oblivion‘ he captures that cosmic folk sound, enhanced by a marvellous slide guitar. Whilst this is classic Neilson, it is seemingly at odds with the rest of the album, which errs on the erratic search for different sounds. The album seems kind of askew at first, but as you listen closer, the songs begin to knit together into a substantial whole. There is a kind of poetry within, which, as on ‘Cowards Song‘, carries a universal understanding with it. Of course, the intelligence on display may prevent it from breaking out into a wider audience, but for those seeking the stark thrill of Leonard Cohen, then you would do well to seek this album out.

It’s easy to drop names as a kind of yardstone for the album, but it remains resolutely true that Alex Neilson is one of the most original songwriters around at the moment. There is a beautiful moment on ‘Alibi Blues‘ when his voice takes flight along with some gorgeous backing harmonies. The song itself is a dirge like riff belying the beauty within, and in doing so enhancing it to something altogether more spiritual. It almost feels like a curtain is being pulled aside on the grimness of the world, and Neilson is allowing you a glimpse of what is inside not just him but all of us. That’s all before he introduces you to the floating corpses of ‘Haunted House‘.

To write about all the nooks and crannies of this quite wonderful album would be to spoil half the fun though, and depending on the life you have led, you will certainly find a different experience based on your own situation. Nielson pokes a hole right into what it means/feels like to be human, and holds a mirror up to himself in order to understand the world around him. It takes guts to do that, and it could be a rather morbid ride if it wasn’t for the sense of self-deprecation underneath it. We should cherish artists like this as they speak of the human condition in all its ravaged glory. With Andromeda, Neilson reveals an album a world away from the prog folk of Trembling Bells’ Dungeness, and one which picks at the open sore of Otterburn to reveal a bleeding wound of human emotion.