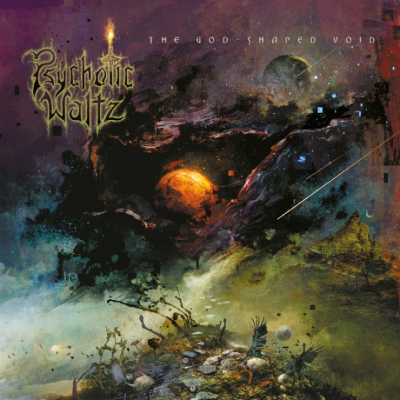 To have Psychotic Waltz in a position to release a new album in 2020 has to go down as one of the comebacks of the last few years. Having formed in 1986, the Californian natives are seen as one of the progenitors of progressive metal, alongside Fates Warning and a few years before Dream Theater popularised the genre. They never achieved the success of either however, and after a string of four albums eventually faded away in 1997 with little more than a whimper. They were a barely remembered footnote in the history of prog metal, but after returning in 2011 with a string of successful shows, they have returned with The God Shaped Void, their first new album in twenty four years.

The advantage of being forgotten is that on your return you’ll sound as fresh as the day you begun. While the likes of Dream Theater have been imitated so often that their own output has begun to sound a little stale in comparison, Psychotic Waltz’ darker, more menacing approach is still a novelty. Armed with the sinister vocals of Devon Graves (AKA Buddy Lackey) and a smoother, more melodious sound than many of their contemporaries, The God Shaped Void finds that the band still have an important niche in the modern scene – edging closer to a more focused heavy metal sound than the schizophrenic warbling of many of their peers.

The first thing incredibly apparent is the anger on display here. Certainly the band does not seem happy with the state of the world, and the theme of God abandoning us runs throughout, from the lyrics (the chorus cry of “angels carry guns” on ‘Pull the String’) to the album title itself. Graves’ lyrics rally against the so-called elites of the world, particularly on ‘All the Bad Men’ where he spits out lyrics like “some say the bad men started every war, and they lie to the world”. This is not a happy band, and certainly they’ve come back with a point to make.

Musically however there is more levity, with the band continuing where 1996’s Bleeding left off. That the more eclectic approach of the band’s earlier albums hasn’t returned will no doubt disappoint some, but the band favour a smoother approach, with guitar harmonies of Dan Rock and Brian McAlpin crashing into menacing riffs. Another band might have overused Graves’ flute – as it is, it’s perhaps too sparsely used, feeling like a bit of an afterthought. This attitude restraint does certainly does not prevent some of the more euphoric moments from shining through – the key change on the chorus of ‘Stranded’, the punctuated ‘While the Spiders Spin’, the crescendo at the end of ‘Devils and Angels’ and the moment ‘The Fallen’ goes from power ballad to stirring rock song are all highlights, as is ‘Sisters of the Dawn’, which sees Graves’ morose wailing at its most histrionic, a truly enchanting performance.

Indeed, while it’s Graves’ hypnotic performance that brings the band their star power, as a whole they feel like a cohesive unit in a way that their peers often do not. The band has clearly matured from their earlier incarnations, older and wiser and perhaps more in touch with what they bring to the world of progressive metal. The God Shaped Void does not merely relive the band’s legacy, but writes a new chapter in it; one that could well see Psychotic Waltz reach a new pinnacle in their careers.