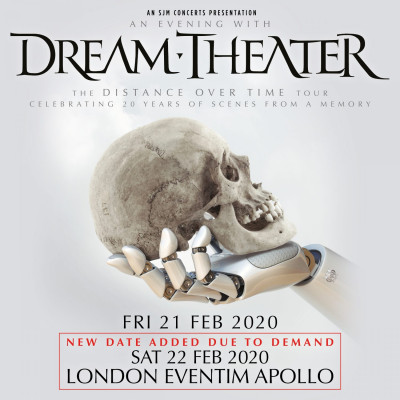 As market pressures in the music industry force bands to devote more of their time and energy to touring, the phenomenon of performing classic albums in their entirety has become somewhat commonplace for artists to bring variation to their set-lists and ensure that fans keep coming back for every tour. With fourteen albums under their belts and an already rich history of putting on extensive performances in a live setting, it is definitely not a surprise to see progressive metal legends Dream Theater getting in on this trend. Having already performed their famous sophomore album Images and Words in full for its twenty-fifth anniversary in 2017, now it was time to turn their attention to the ground-breaking Metropolis, Pt. 2: Scenes from a Memory. Released in 1999, Scenes from a Memory is hailed as a triumph of the prog concept album, serving as a sequel to the song ‘Metropolis, Pt. 1: The Miracle and the Sleeper’ from Images and Words and telling a compelling story of love, betrayal and rebirth over its 75-minute run-time.

Dream Theater became well-known a long time ago for their ‘Evening with Dream Theater’ performances where the band would perform an extended show with no support acts separated by an interval, and this was to be the order of affairs at the Eventim Apollo on this occasion. They had already played one night at this venue the previous day, and were filming the tour DVD over both performances. Despite the night being mostly a celebration of Scenes from a Memory, Dream Theater were still technically on their Distance Over Time tour (with itcoincidentally being exactly one year since the album’s release) and began the show with a 45-minute set mostly dedicated to songs from that album. Things got off to a slightly shaky start with vocalist James LaBrie struggling to make himself heard throughout the opening song ‘Untethered Angel’, but the sound issues were soon fixed for ‘A Nightmare to Remember’ from 2009’s Black Clouds and Silver Linings. When you have songs as long as Dream Theater’s, 45 minutes equates to just six songs before the intermission came. At this stage, it was almost like Dream Theater were supporting themselves; because as good as the opening of the show was, it was not what the audience was there for and the real excitement was for what would come next.

The true peak of the anticipation was reached with a short intro video on the screen erected across the back of the otherwise relatively bare stage, which then led into ‘Regression’, the opening track of Scenes from a Memory. The culmination of this growing tension came as the ‘Overture 1928’ transitioned into the opening riff for ‘Strange Déjà Vu’ and the crowd responded with the utmost enthusiasm. Dream Theater have always inspired a real devotion in their fans, which was clear to see at the Apollo on this occasion as it felt as though every word of every song was sang back to LaBrie in unison. Unusually, because of the band’s focus on the lengthy instrumental sections of their songs, LaBrie is often the least visible member of the band, leaving the stage for long sections when the musicians take over and engaging with the crowd very rarely. When he does speak with the audience, he presents as an endearing figure however, and most importantly he responds admirably to variety of challenges that this album presents, particularly notably in the slower numbers like ‘Through Her Eyes’ which are often spoiled in a live setting by the temptation singers have to amp it all up and be as loud as possible, which LaBrie refrained from here much to the benefit of the show.

The truth is though, every member of the band was on phenomenal form for this special occasion, even by their usual incredibly high standards. Newest member Mike Mangini, who replaced founding drummer Mike Portnoy in 2010, brings a great sense of joy behind the kit, not to mention a reliable force even during some of the more complicated time signatures. For John Myung, perhaps the most unassuming member of the band, the all-seated venue and the minimalist nature of the stage set-up allowed focus to be shifted to him on occasion. It’s easy to forget what a talent he is and how his powerful picking at sometimes seemingly impossible speeds makes Dream Theater’s sound possible. Jordan Rudess was a lot keener to take centre stage on occasion, rarely missing an opportunity to leave his keyboard stand behind and pick up the keytar for solos such as in ‘Home’. Perhaps the biggest star of the show though was guitarist John Petrucci, already a hero to so many, he enhanced his reputation yet further, if that’s possible, with his measured playing throughout and nailing every solo that came his way with utter perfection. For those who doubt that metal bands can perform at the highest levels of technical ability, I would suggest you show them the live recording of ‘The Dance of Eternity’ from this show.

Dream Theater at their very best though are not just a band you sit back and admire the musicianship of (though there was plenty of that to go around). They are a band who use their supreme skill to bring out the emotion in the stories they tell, and this performance was an absolute masterclass in how to do that. Nowhere was this encapsulated more profoundly than with the album’s penultimate track ‘The Spirit Carries On’, which merges LaBrie’s best vocals and an astonishing Petrucci solo with a superb resonating ballad that had the whole crowd on their feet by the end of it. Though they have their detractors, the ability of Dream Theater when they hit perfection cannot be denied. They are legends of their genre for a reason, and showed why with this celebration of their greatest achievement as a band. This will live long in the memory of those who were there, and will almost certainly rank not just as one of Dream Theater’s best live performances, but one of the best live performances many of us will see for a long time.