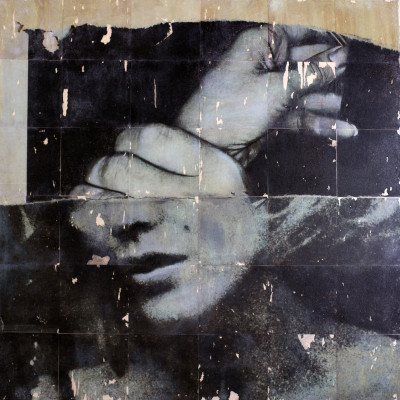 Amongst the doom-mongering, panic-buying and an enforced isolation it seems the perfect time to be locked away in a small room with only some dark and moody post-metal for company and if ever there was a suitable soundtrack for such an occasion it would be Telepathy. The UK-based 5 piece release their third full length record Burn Embrace as a follow up to their critically acclaimed 2017 release Tempest. The band embraces a mixture of genres and each of their albums shows a slightly different aspect of the band. Burn Embrace, on a first listen didn’t seem to throw anything particularly interesting at the listener, as is so often the case with music of this type a good few listens are required to really understand and appreciate what the band are trying to do.

The album opens with ‘Eternal Silence’ with a fairly slow and atmospheric start with some synth and crashing drums. The track meanders for a while before picking up some pace, using black metal-esque drums and some thick layers of distortion. The track peaks at a noisy crescendo before falling back to lone guitar, the respite is only brief however and the full band soon return to full force. ‘Aonaran’ and ‘Black Earth’ are similar in nature and feel to the first track, thick chords and a more melodic guitar jostle for position over a thick backdrop of bass and drums. These tracks can feel a bit random and the band try to cram a lot into a single track and it feels in places like they should give the themes a bit of time to develop.

The album takes an interesting turn with ‘Pariah’, choppy bass and tom-heavy drums are paired with picked clean guitar before thick, heavy distortion and a melodic lead guitar take their place. For the first time on the album the listener is drawn in and the track is patient in it’s build up and passages are given time to develop. ‘The Void in Aimless Flight’ follows along the same lines, the variety is still there but it doesn’t feel rushed. Telepathy blend genres, picking different aspects of each to illustrate different parts of their music, guitars range from almost post-rock to thick slabs of distortion and drums can vary from black-metal blast beats to a more blackgaze character. When this is done well, which it is in these two tracks in particular it makes for interesting and emotive music.

The penultimate track ‘Sorrow Surrenders its Crown’ carries on this narrative, again, slowly building and drawing in the listener with a desire to know what’s coming next. It’s as dense and heavy as to be expected from the band and patiently builds to a stunning and noisy peak. Ending the album is the title track which truly sounds like the soundtrack to the apocalypse. For the first and only time vocals are used over a sparse and melancholic track, distant violins add to the feel. It’s a completely different track to the rest of the album but somehow fits.

Burn Embrace is a mixed bag, in some places it shows exactly what Telepathy can do as a band and how they have developed their sound and in others it is confused and unsettled. In each of their albums the band has gone in different directions and on one hand they should be applauded for trying to push the genre and explore themselves as artists but in this case it is a little hit and miss. When it’s good, it’s really very good. A patient listener will be rewarded with dense and wonderful soundscapes and some genuinely exciting and emotive music.