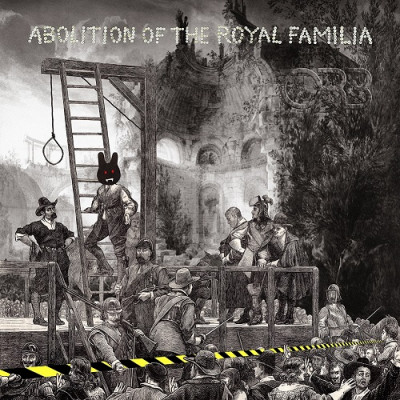 Abolition Of The Royal Familia by The Orb

The Orb are legendary. Abolition Of The Royal Familia is the collective’s seventeenth full-length record since their peerless debut album, The Orb’s Adventures Beyond The Ultraworld appeared in 1991 and changed the face of ambient music forever. To their credit, Alex Paterson and his collaborators have never tried to make the same record twice, something that must have become increasingly difficult over time. For thirty years, The Orb have plotted a course for deep space – be it inner or outer – and dared their listeners to follow. This new album amply displays the same creative bravery and commitment to transporting their listeners to new, strange realms; but like so much of The Orb’s work, it is also informed both by history and by present-day concerns.

As with The Orb’s previous album, No Sounds Are Out Of Bounds, Abolition Of The Royal Familia successfully straddles the divide between more mainstream club fare and the lengthy ambient voyages into deep space that Paterson and his collaborators have become best known for. Paterson describes the album as very much ‘part two’ of the experiment underpinned by the anything goes ethos that created No Sounds Are Out Of Bounds, and there is indeed a lot that connects the albums together, not least the decision to house more radio-friendly material alongside lengthier, more exploratory fare.

The sprightly ‘Daze’ opens the record, serving much the same function as the previous album’s opener (‘The End Of The End’) did in showcasing The Orb at their most accessible and direct. It’s gliding, soul-infused euphoric house segues neatly into ‘House of Narcotics’, which is built upon what feels like a funk version of the Vangelis-penned end titles music from Blade Runner. It sprawls out into a Detroit-influenced number that pulses relentlessly for its six minute running time, occasionally reminiscent of the mid-section of Michael Jackson’s Thriller in its gleefully funky disco indulgence.

If listeners should begin to wonder if all this smacks of The Orb having entirely too much retro loose-limbed fun, ‘Hawk Kings‘ snaps into a metronomic techno piece shot through with samples of Stephen Hawking that recalls their finest work from the tail end of the 90s, assisted by strings and wordless snatches of vocalese that lend an air of the dramatic and melancholy to proceedings; the subsequent ‘Honey Moonies’ is a more minimalist offering, serving up squelchy acid effects alongside a loping, insistent beat, with an undertow of shimmering synthesizer.

It is now that the album decides to ease up its momentum with ‘Pervitin‘, a string-assisted ambient wash; its graceful ebb and flow is peppered with French language samples and effects. Having established this blissful oasis, The Orb are not about to abandon it too quickly, and ‘Afros, Afghans And Angels‘ is tuned in via radio before gliding off into inner space, a beautiful ambient piece that comes across as equal parts Pink Floyd’s ‘Shine On You Crazy Diamond’ and Eno’s ‘An Ending (Ascent)’.

‘Shape Shifters (In Two Parts)’, its gentle ambience broken with relaxed trumpet, gliding bass and whirling synth effects, is the sort of long-form spacey treat Orb aficionados will particularly enjoy; think of it as a jazz-infused ‘Spanish Castles In Space’, an impression not discouraged by a similar use of Russian-language samples. As its title suggests, however, it is very much a piece of two halves, the second settling into a steady dub reggae groove that is periodically twisted and warped into intriguing new shapes; again, if parallels need to be drawn, this second chunk of the track is a distant cousin of The Orb classic ‘Towers Of Dub’. As always, however, The Orb are content to evoke such comparisons without xeroxing their back catalogue; the general effect is one of Paterson and his collaborators gleefully flicking through their huge, ever-growing catalogue and adding already established musical easter eggs to their new concoction, a sort of thematic shorthand where a familiarity with the back catalogue allows long-term listeners an added dimension of enjoyment.

‘Say Cheese’ picks up almost where ‘Shape Shifters’ left off, its steady skank an echo of the immortal ‘Perpetual Dawn’, whilst ‘Ital Orb’ kicks off with a chucklesome spoken word sample concerning the smoking of cannabis joints by squirrels(!) before setting off on a rather spacier reggae-infused tip, intermittent harmonica and a harp motif interspersed between a recurring melodic line, a thoroughly Balearic invention that evokes a time fondly remembered without ever sacrificing its smoothly-produced modernity.

‘The Queen of Hearts’ emerges from a haze of samples before taking shape as an electro & drum and bass hybrid, shuffling determinedly along, a feel-good moment of hedonistic fun before the album emerges into the simply gorgeous ambient soundfield of ‘The Weekend it Rained Forever’. Opening with the sound of rain, its chiming piano surrounded by singing birds, surf guitar, the distant rumble of thunder, and a swirling undertow of synthesizer. In the sense that its over ten minutes in length and its blissful yet strangely bittersweet ambience comes at towards the end of the record, it’s related to No Sounds… closing track ‘Soul Planet’, but whereas ‘Soul Planet’ was very much the sound of the vast emptiness between the stars, ‘The Weekend It Rained Forever‘ is more earthbound. Redolent of quiet days at home, relishing the relative quiet of busy lives interrupted by rain as Mother Nature washes the human race indoors, the track is – perhaps somewhat ironically, given the current situation many of us find ourselves in during the coronavirus outbreak – a hymn to isolation, to the supremacy of Nature, and an appreciation of Gaia, Mother Earth, who will outlast us all.

The closing track, ‘Slave Til U Die No Matter What U Buy‘, serves as an epilogue of sorts following that reminder, and this time the focus is on us, the virus that infects Mother Earth. The title – inspired by Jello Biafra – can be seen as a critique of consumerism and the self-cannibalising ouroborous of capitalism, but the track goes further. The samples here are warnings: the sound of society eating itself as stentorian authoritarian voices order us to stay indoors “all constitutional rights have been suspended… Do not attempt to think… Stay in your homes… Remain calm… Do not panic” – the latter instructions all too familiar to those familiar with Hawkwind’s immortal ‘Sonic Attack’. It’s a reminder that we have submitted for too long to those who seek to control our existence. “Shut up, be happy… obey all orders without question… everything is done for you“. The album – and society as we have come to know it – ends with a squalling siren. The Orb have transmitted this warning back from the future; we ignore it at our peril.

The Orb’s sensational recent form is a cause for celebration; it’s reassuring to see one of the scene’s pioneers in such rude creative health. They’ve never lost their knack for escapist beauty, or earthbound, restless energy; similarly, they have not lost their desire to address contemporary issues without ever being arch about them. It’s a precarious tightrope to walk, yet they walk it with the assurance and deftness that their very longevity provides. As suited to the dancefloor as the chill-out room, as funny as they are moving, as pointed as they are irreverent, The Orb are still charting the far reaches of space. In these strange and worrying times, perhaps we need them more than ever.