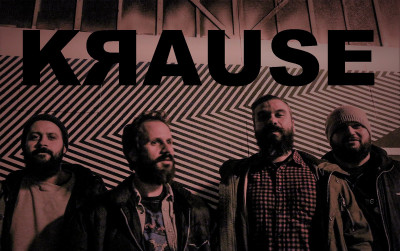 We are all rather misanthropic and pessimistic as people, so our lyrics tend to either be stories of urban isolation or reflect our disappointment with our own selves and humanity under capitalism.

Having been introduced to Athens noise rock quartet Krause’s music by a friend who I met at a Gouge Away gig last summer, I was instantly impressed by it. When he told me he could put me in touch with guitarist and vocalist Alex Vagenas and he would be happy to do an interview, I was excited, but life got in the way. In late March, I finally cleared my schedule and asked my friend to put me in touch with Alex via Facebook, and Alex was kind enough to answer my questions. He starts by explaining how the band got together, speaking from the band’s viewpoint and referring to himself in the third person. “Three of us (Babis, Nick, and Alex) already knew each other and had discussed playing together in some form or other various times but it wasn’t until 2015, when Alex moved back to Athens from London, that we finally got together and started jamming.”

“Alex and Babis really wanted to do something noisy and abrasive and Nick had been trying to start a Helmet/Prong-sounding band for a while, so it all came together. We already had all the songs that would end up in the first record so we started working on them without a bass player. Eventually, Alex saw Kostas’ band Rita Mosss playing and thought it could be an idea to ask him to join or help out, so he introduced himself to Kostas and asked if he would be interested. Luckily for us, he was, so a few months later we recorded 2am Thoughts as a four-piece. The line-up has remained the same since.”

When I ask about bands with whom Krause feel like they have a kinship, I have to confess to feeling a little guilty at not having done my research better; it turns out that Alex is a former member of Casual Nun, whose set supporting the mighty Oxbow at their last London gig greatly impressed me. “As far as non-Greek bands go, we love the guys from Casual Nun, Alex’s former band. They’re amazing people and musicians and we’re really looking forward to sharing the stage with them at some point in the future. Unfortunately, we haven’t been able to make that happen so far due to logistical reasons.”

Alex then explains that when it comes to Greek bands, “we are interested in extreme music in all its forms, so we are good friends with and support most local extreme bands. At the same time, we definitely do feel a particular kinship, both musically and personally, with Rita Mosss … and the guys from Nick’s other band, Progress of Inhumanity. They are amazing people and friends and two of our favourite bands. We also have a lot of love for the guys in Sadhus (The Smoking Community) and Last Rizla, who also released our second album, The Ecstasy of Infinite Sterility, via their label Fuzz Ink. Also the guys from harsh wall-of-noise band Mob, who played with us on our first release show.”

When it comes to Krause’s musical antecedents, Alex says the band’s approach has been fluid rather than concrete. “When it comes to extreme music we are all into very different stuff, from grindcore to extreme noise etc, so we don’t really have specific musical influences as a band. When we started the group, all we wanted to achieve was to create an atmosphere and tone more than follow a style or genre. In our case, this harks back to the Amphetamine Reptile or Touch and Go bands which were characterised more by an attitude than a cohesive style or sound. As a result, the reference points that we do share (Unsane, Cherubs, Breach, Entombed, Cursed, Hammerhead, Killdozer, Helmet, Shellac, Today is the Day, Melvins, Whores etc) have more to do with a certain approach to music rather than songwriting.”

He explains that the band’s songwriting is informed by the fact that “we are all rather misanthropic and pessimistic as people, so our lyrics tend to either be stories of urban isolation or reflect our disappointment with our own selves and humanity under capitalism. Our opinions were confirmed by the financial crisis and the resultant global situation, so I don’t see our themes changing any time soon.” These are sad words indeed, but possibly an accurate reflection of our current state of affairs. On a happier note, Alex is keen to explain that the band’s music has gone down well in the UK. “Both of our records have been co-released by Riot Season, so they have been quite popular in the UK. We’ve also been lucky because many promoter and musician friends of ours from the UK have liked them and pushed them (shoutout to Rich Collins, Alastair Mellor, the Casual Nun guys, Gordon from Luminous Bodies, Alex from Ghold etc), for which we are also very grateful.”

He adds that Krause “were planning to do a tour of Europe and the UK but Brexit and COVID-19 have gotten in the way, so it’s all very vague at the moment.” Alex concludes our interview by discussing the band’s plans to record new material in the future. “We’ve been working on new songs since the last album came out so we already have quite a few ready for our next release. At this point, we’re simply waiting for the lockdown to be lifted in order to start jamming again!” This is a position in which all musicians currently find themselves. It could mean that when the current global health situation improves, listeners the world over will have some great misanthropic Greek noise rock to look forward to. We can but hope.