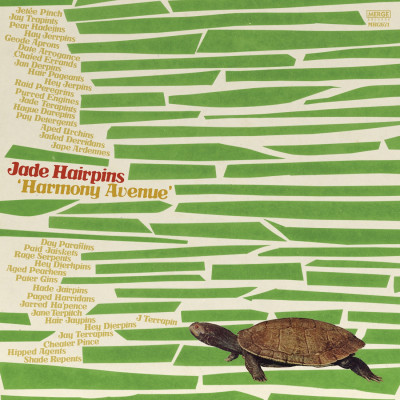 Jade Hairpins were formed by lead vocalist/rhythm guitarist Jonah Falco and bassist Mike Haliechuk as a side project for the more power pop-leaning songs they wrote during the writing and recording sessions for Dose Your Dreams, the last album by their ‘primary’ band, Fucked Up. The quartet’s debut album Harmony Avenue shares an ‘origin story’ with DYD and, like the earlier album, features London-based musicians, this time in the shape of lead guitarist Jack Goldstein and drummer Tamsin M Leach. It chops back and forth between guitar-based and synth-based songs in an intriguing manner. Falco said in a recent interview that the idea behind the project was to make an album that sounded akin to “M’s ‘Pop Muzik’, the Happy Mondays, Roy Ayers, early Bowie, early glam rock but with a bit of bubblegum … and then some post-punk elements.” Harmony Avenue accomplishes that task in spades.

The album opens with puntastic lead single ‘J Terrapin’, a breezy power pop number replete with pianos and Theremins that sounds like it would make for ideal FM radio listening on a hot summer’s day. This is followed by ‘(Don’t Break My) Devotion’, the first song on the album to feature synths in a relatively prominent fashion and one whose verses sound like they’re being sung by someone who’s just overdosed on helium at a children’s birthday party. ‘Father Coin’ recalls Abbey Road-era Beatles in a manner similar to ‘Love is an Island in the Sea’ from the last Fucked Up album. It also features some virtuoso guitar work from Goldstein around two thirds of the way through.

‘Yesterdang’ has a more wistful tone to it and features Falco vocally comforting an unknown addressee that “the sun will also rise with the clouds which part and set”. The song seems to be exploring the idea that not only young people are valuable to society. ‘Post No Bill’ details the complications that beset one man’s efforts to divorce himself from capitalist economics and features side one’s strongest evocations of late 70s/early 80s funk pop. ‘Broadstairs Beach’ continues the summery guitar pop vibes initiated by ‘J Terrapin’, while ‘Dolly Dream’ is one of the album’s most psychedelic selections.

Snatches of ‘Mary Magazine’ were previously heard in Fucked Up’s ‘Normal People’ video so it’s slightly strange hearing the song in full here, although it is a very infectious power pop song. ‘Truth Like a Mirage’ manages to combine the album’s synth and jangly guitar elements in one neat little sub-two-minute package, while ‘Mother Man’ makes for a nostalgic, New Order-esque closer.

On Harmony Avenue, Falco, Haliechuk, Goldstein, and Leach craft music that is evocative of long summer days spent outdoors (an experience that, sadly, still looks like it will be an unsafe luxury for some time to come). Falco and Haliechuk take the psychedelic power pop elements of Dose Your Dreams and run with them, creating an album that is fun and innovative whilst staying the right side of derivative. The yearning, wistful, nostalgic vocals that Falco employed on his Lonely Wholesome solo work are employed to even more powerful effect here. This debut album is a triumph on all fronts.