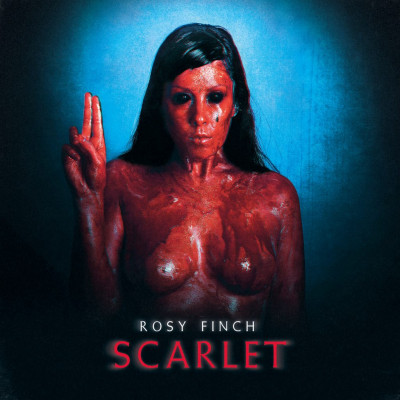 There has been a lot of activity on social media during the Coronavirus lockdown asking people to name their top ten most influential albums. Now, I am not usually one for these types of things but it did make me think what influenced me musically when I was much younger and a quick mental list revealed that my choices are heavily skewed towards grunge. Now undoubtedly, the ever clever Spotify algorithm knows this and a few years back it threw up Rosy Finch on a playlist. Their debut record (Witchborough, released in 2015) brought back fond memories of L7, Babes in Toyland and Alice in Chains.

The band, originally formed in 2013 changed their line up in 2019 with singer/guitarist Mireia Porto being the only consistent member, now playing as a three-piece with Oscar Soler (bass & vocals)  and Juanjo Ufarte (drums). This change in lineup saw the band take a slightly more heavy, sludgy and aggressive direction to their sound. Some of the aspects are still there, the slightly distorted, prominent, chunky bass lines and the fuzzy guitars. Porto’s vocals however have changed and developed, her screams cut through the thick back line and have more of an aggressive tinge. Their sophomore album, Scarlett, is more sludgey and heavy. The band’s sound is confident and assured and has lots of depth and colour.

Scarlett, as the name might suggest has a ‘red’ as a concept, “Red has always represented danger, lust, sin, guilt, blood…” according to Porto. This theme is fitting with the slightly more aggressive tone to their sound. The album opens with ‘Oxblood’. The track starts with just drums with bass and guitars being added as it gathers pace. The band adds and removes instruments to change the dynamic with the drums holding everything in place. Porto’s vocals are visceral and raw and backing vocals are barely audible but add to the depth. ‘Lava’ is more straight up alternative rock. Porto’s guitar has a pleasing buzzsaw sound and her vocals fade in and out of the mix giving a slightly ethereal feel to the song. The next track, ‘Vermilion’, has a similar sound, the vocals are atmospheric and moody and occasionally punctuated with a wonderful scream.

The band describe themselves as sludge rock but the first three tracks have a grunge feel, similar to their first album, suggesting more of an evolution to the band’s sound rather than a step change. This changes with ‘Amaranto’ faster paced at the beginning before the thick and slow riffs come in, the track gathers pace and Porto alternates between breathy and soft and harsh, screamed vocals. The track is hectic and noisey and begging to be played very loud. ‘Gin Fizz’ is again fast paced with similar alternating vocal styles, the track has a slightly unusual feel due to the slightly off-kilter drum track and takes a sharp about turn mid-way through for a short quiet section before exploding back to the original frenetic pace, interesting use of layered vocals. The next track ‘Ruby’ is similar in the fact that it’s very guitar driven. These tracks feel like the new band is stamping their mark on the sound and Porto responds in kind with her guitar and vocals.

The album’s title track is also riff heavy, the vocals however are layered and have a breathy and slightly uncomfortable aspect to them. The last track ‘Dark Cherry’ opens with a chunky bass line and the guitar alternates between thick chords and riffs with the occasional lead guitar thrown in. Vocals at time are pushed down in the mix and the layered backing vocals are again used for the distant ethereal effect.

Porto has a great guitar tone and the tracks that are guitar driven are the best bits of the album, the variety of vocals prevent the tracks from becoming one dimensional with bassist Soler providing backing vocals in places and the guitars really drive and carry the tracks along. The album on the whole sounds like an evolution, starting where their debut album left off and then slowly morphing into a new, more confident, dynamic sound. It’s heavier but still melodic with plenty of dynamics and depth. It is well executed and the mixing is expertly done and the sound is powerful and rich.

Rosy Finch deserve to be far more recognised than they are, their new lineup have breathed new life into the band and their take on sludge, stoner and grunge is expertly done and although the listener is probably reminded of their many influences their particular sound is quite unique.