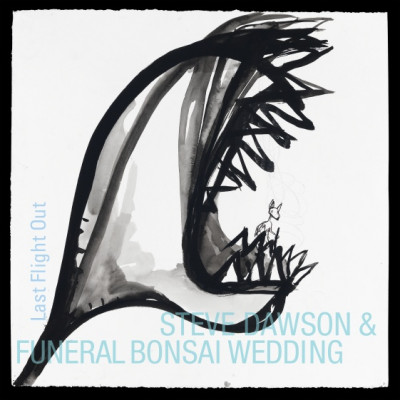 Steve Dawson and his 10-person strong Funeral Bonsai Wedding (well, at least for this album) probably recorded Last Flight Out, the Chicago musician’s latest offering a while back, but the title of the album somehow hit the current times right on the nose. For some, this might be put-off, but it would be a huge mistake! What we have on our hands is one of the more poignant, melodic, chamber folk/pop albums to pop up in a while. Well, at least since John Southworth’s Niagara some six years or so.

Still, that ominous feeling seems to be exactly what Dawson had in mind: “The more I think about … the whole album, really, it seems to be about the feeling that we are all living through a giant collective ending. With climate change, global rage and violence, the undoing of the fabric of society it feels like an ending. So, the next thought is, ‘how can I best use the time that’s left?’”

So how were Dawson and his collaborators able to express such feelings on this album? To put it in one word, brilliantly. Along with Dawson’s exemplary songwriting what shines through in particular are Jason Rebke’s string arrangements and Jason Adasiewitz’s vibes. These two veterans of the Chicago scene, along with all the other players on the album combine beautifully with Dawson’s folk/Americana songwriting (he’s also a principal writer for Dolly Varden, a Chicago folk outfit). The highlights here are the opening title song and the beautiful ‘The Monkey Mind Is On The Prawl’.

And while dark thoughts inspired this album that saw the light of the day in dark times, it is at the same time full of hope and inspiration. And some brilliant music.