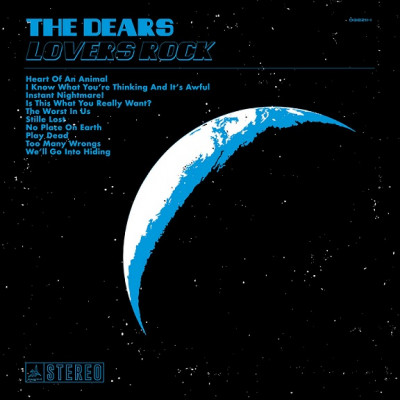 Lovers Rock by The Dears

Montreal’s The Dears are in some run of form. Their music has always been quality but they have been releasing a steady flow of really excellent orchestral pop/rock music that began with 2015’s Times Infinity Volume One. The sister album, 2017’s Times Infinity Volume Two pushed the bar a little higher and here we are again, eighth album Lovers Rock is another superb collection of songs about love, romance, yearning and heartbreak. The core members Murray Lightburn (vocals/guitar/other) and Natalia Yanchak (vocals/piano) are joined this time round by longtime drummer Jeff Luciani, Steve Raegele (guitar) and Rémi-Jean LeBlanc (bass). Additional musicians making up their glorious sound are Sam Roberts (strings) and not one but two saxophonists, Alex Francoeur and the E Street Band’s Jake Clemons.

Opener ‘Heart Of An Animal’ is a classic Dears song, all swooning guitars and off kilter keys combining to make a wondrous pop rock hybrid, with Murray’s glorious vocals soaring in the sublime chorus. No other act captures heartbreak and romance like The Dears, Murray’s voice has lost none of it’s power over the years. The sumptuous ‘I Know What You’re Thinking And It’s Awful’ has one of those slippery verses that oozes consummately into an equally pleasing chorus. The song is the aural equivalent of plush velvet, but with wine spilt all over it. Murray glides from baritone to falsetto and the melodies are exquisite along with the melancholic keyboards that underpin the song.

I do like some timpani and the booming ba-bums that punctuate ‘Instant Nightmare!’ coupled with the sprightly strings and computer game effects, give the medium paced song a little lift. Natalia’s vocals are more of a flat line compared to Murray so these neat embellishments help greatly. Another unique sound of The Dears is the sweet mix of delicately picked guitars and immersive strings and keyboards. When arranged as expertly as they are in ‘Is This What You Really Want?’ it becomes the main focus over the vocals, but it works well.

Murray has always had an expert way with melody and ‘The Worst In Us’ is a delightful orchestral pop rock nugget that splits half way through, to try out some percussive experimentation and allow the band a little jam time. Murray twists the melody a little and the song effectively morphs into another without you noticing. Dropping into the lower register of his baritone to croon ‘Stille Lost’, Murray looks towards the 60s for inspiration with a bouncy organ tone. Jake Clemons rips out a sublime saxophone solo and we’re transported to a smoky Parisian jazz club. Murray declares “We’re Lost! Nobody gives a damn!” and it’s a perfect synopsis of the state of the world today.

Guitars get fuzzy in the chorus of ‘No Place On Earth’ but the melody pales a little compared to the wonderful creations of the early songs. I’ve never compared Murray Lightburn to Lenny Kravitz but it’s a point to make here, must be those fuzzy guitars. On ‘Play Dead’ suave guitars and 60s style organ play out a shimmering groove while Murray rolls out a lovely and tender vocal. The Dears often manage to make you feel warm and loving with their music when they aren’t reeling from a break-up. ‘Too Many Wrongs’ has an easy listening groove as Murray croons over the soothing strings and acoustic guitars. The sound is distinct and nobody does this better, why are The Dears still ostensibly an underground act?

The instrumentation and production The Dears utilise is another vital aspect of their music and for years now they have been creating lush music that sounds like it could have been recorded decades ago. On closing track ‘We’ll Go Into Hiding’ Murray revisits the splendour of the first half of the album with another stunner of a chorus where he effortlessly soars high and swoops low showcasing his fantastic range. He really is one of this generation’s finest singers and it’s a fucking shame that he isn’t getting recognition on a wider scale. As the song winds to an end the strings become even more heart breaking as Murray tenderly sings “It’s gonna be alright, I promised you a good life, yeah we’ll never turn back the clocks and we’ll make it last forever, on Lovers Rock”.

My love affair with The Dears goes right back to their third album, No Cities Left (which reached No.127 in the UK chart-WTF?!!) and I forever associate that album with a deeply troubling time in my life, the passing of my Father. Perhaps that is why my bond with them is as deep as it is, coupled with their ability to really inhabit their songs. Murray Lightburn gives everything in his vocals and the loving care that goes into their arrangements never fails to astound, even on lesser songs. Down to Murray’s enthusiasm mainly, The Dears are also an astonishing live band, they have a superb back catalogue to revisit, yet not a ‘hit’ to be found anywhere. I don’t know what it will take for The Dears to get what they deserve but if you know their music, you’ll be all the richer for it.