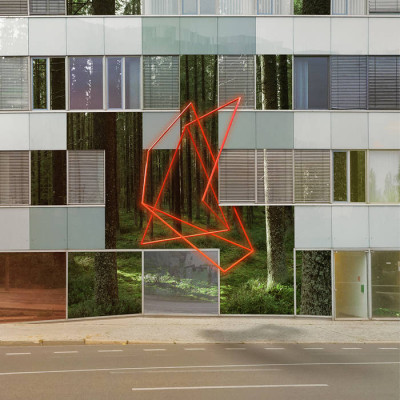 Mythographer is Antethic’s third full length album, but if you’ve listened to either of the previous two you may not recognise them on this release. Whereas the St. Petersburg trio previously recorded some pleasing, rather gentle, mainly guitar-based post-rock, Mythographer sees them undergo a Vessels-like transformation, embracing all matter of electronic tech and genres. Where Leeds-based Vessels recorded two albums of atmospheric math rock and then unleashed two further LPs of danceable – and critically acclaimed – electronica, Antethic have morphed their sound completely and on this album experimented with techno, ambient, shoegazey electronic beats and all points in between.

Plus, they’ve also signed to Holy Roar Records, which is a surprise in so far as that’s a metal label, right? Possibly, but if Holy Roar are about anything it’s attitude and ambition, championing young bands with a strong message and a desire to make it heard. And I’m all for a bit of crossover, bringing some metal attitude to a mix of genres.

‘I Glow’ sets the scene with a doomy, mid-paced techno stomp. The first part definitely feels like an intro, like they’re getting into the groove and testing out their new sounds. It takes off in the second half with a fuzzy synth riff that sounds both dour and monolithic at the same time. At first, next track ‘Frontier’ ups the pace a little but then backs off, its glitchy beats and woozy keyboard melody swirling around, creating an atmospheric backdrop. But then, it transforms mid-song into a euphoric, beat-driven techno anthem! There’s an uplifting whoosh, and some Ibiza-bothering junglist beats kick in. This I never expected to hear on a Holy Roar record, but it’s thrilling.

After that Antethic move on to other sounds and the thousand-yard stare of ‘Haoma’ changes the mood completely. Its ambient textures and doomy beat change the mood of the whole album in an instant. I love the dark textures woven by this track, and the contrast sits well with the euphoric highs of ‘Frontier’. This segues into ‘To Move a Mountain’, whose industrial dirge softens and then blossoms into synthy textures and beats that wouldn’t sound out of place on Ian Broddy’s DiN label. The textures and sounds continue to shift and change – from the saw-toothed guitar drone that introduces ‘To Move a Mountain’, to the noodling keyboards of ‘Absurd Hero’ and the warm melody of ‘Tyro’, which is very atmospheric and one of my favourite tracks on the album.

Each track on Mythographer is atmosphere-laden and well worth a listen in its own right. The range of genres displayed and the moods created by the music make it an eclectic album in terms of its sound. Antethic’s step into the world of electronica has led to some inspired experimentation and an exciting new direction for this group. The fact that there’s not a massive amount of continuity to the overall vibe of the album might be a negative point for some listeners. At times it does feel like they’ve thrown it all in because they can. But crafting ambitiously disparate sounds into a cohesive album comes with experience and I think that Antethic are just getting started. Their best work is yet to come, I’m sure. Listen to Mythographer, enjoy the headiness and the variety, wallow in the lush synths and absorb the atmosphere. Then wait to see what they do next.