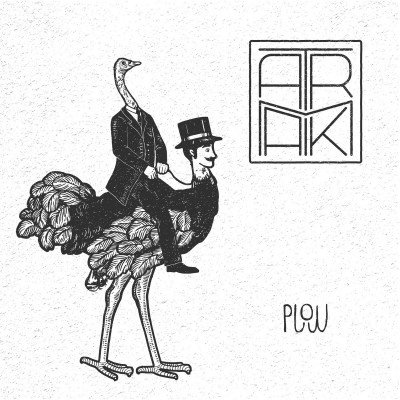 Any band that sports that kind of artwork for their debut EP and introduces themselves on Bandcamp as having “started off as an acapella singin’ band that specialised in Mongolian throat singing,” but “since the world wasn’t ready for that yet, we decided to become a progressive post rock/metal trio” is alright in my book.

Tarmak hail from Ghent, Belgium, and probably sell themselves a little short by adding themselves to the post-rock and post-metal tag. I personally love those sub-genres, but they do seem to be two terms that these days many are dismissive of as having been ‘done’ or seen as unadventurous. Given the whole idea of ‘post’ is to highlight the case that anything might go, it seems a particularly curious point of view to have. Anyhow, for anyone doubting the trust of this paragraph, Tarmak most certainly share kinship with the associated sound and the fact that they push against expectations.

As a dynamic trio I can’t help but think of Russian Circles. Tarmak may take some cues from the Illinois three-piece (see the opening and most intense moments of ‘Pentanque’), but there seems to be a lot more space overall in the four tracks on Plow, especially on the lengthier tracks ‘Krater’ and ‘Krampus’. With some riffs that crunch like Helmet or Melvins but which then drift, distractedly, into semi-psyche pastures before pulling themselves together again to fit into a sound reminiscent of the more contemporary Pelican output, Tarmak traverse a lot of ground indeed, but all through inter-related textures and sounds that quite easily and obviously complement one another. Nothing is too jarring, but their compositions are clearly extremely well thought out and intent on challenging the listener.

Many a trio allow the guitarist to take centre stage, spotlight and all the trimmings, but here both bass and drums have their time to shine, too. The bass in particular, played by Geert, is often a revelation, with a dexterity to challenge Sander’s guitar playing. Simon’s drums propel Plow ever forward throughout its 26-minutes. One can tell the trio are extremely tight and adept songwriters, so it comes as no surprise that the band have been jamming since 2014. Plow is an impressive first foray by the band and an immersive glimpse into the world of Tarmak.

If there was to be one minor negative, it might be the the occasional production slip of the EP; or, rather, in its’ mixing. For songs that are obviously so cohesive in composition and their execution, the mix very occasionally doesn’t honour that, seeming to strain to keep the instruments too airily apart, rather than allowing them to gel more naturally to the ear. It really is a minor point, and – for others – they may find no fault. Plow is nonetheless a thrilling introduction and Tarmak are definitely a band to keep tabs on, once again proving Ghent to be fertile ground for all things heavy and fuzzy.