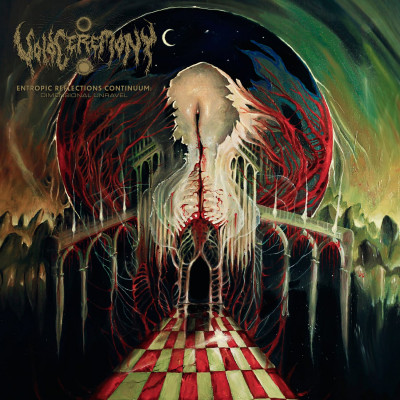 This is a great gutturally fierce, rumbling weird death metal debut album from VoidCeremony. The riffs keep churning in jagged cycles and mesmerising polyrhythms interrupted with strange bursts from other metal dimensions, all while the monotone insistent voice gruffles along. If it’s a ‘Desiccated Whisper’ as the first track title has it, it’s the urgent rasp of some mad reanimated skeleton determined to bite your eyebrows off, rather than a windy wisp of foresty fog.

I’ll admit I don’t actually listen to an enormous amount of modern death metal on record, but I LOVE to hear this exact kind of moldy juddering grot in the warm, earsplitting fug of a live show. Again, no expert here but this feels somewhere between the toxic slime of Impetuous Ritual and the stellar hallucinations of Blood Incantation, a powerful, lurid ghost train clatter through melting nightmares.

The fretless bass gallops all around like a wrecking poltergeist, and the percussion is thrashingly paced and exciting. Shards stab into the pleasing murk, maybe slight thrashy elements in the unspun wild runs in ‘Sacrosanct Delusion’, and an unplaceable echo of some kind of stentorian drama in the piercing slow riff that enters at the end of the longest track ‘Empty, Grand Majesty (Cyclical Descent of Causality)’, the song title hitting the nail on the head again.

‘Blinded to Unusual Existence’ and ‘Abandoned Reality’ take similar routes, both rifling through punishingly hectic battlegrounds in their first halves, before erupting into glorious sprawling tentacles of distorted gurgling, unfurling spirals of weird death metal DNA. Final track ‘Solemn Reflections of the Void’ is a bit more spacious at first, but only for the briefest breather before tumbling through agitated fractal zones to a fittingly impressive conclusion. Monstrously good.