(((O))) Review: Yaldabaoth – That Which Whets The Saccharine Palate 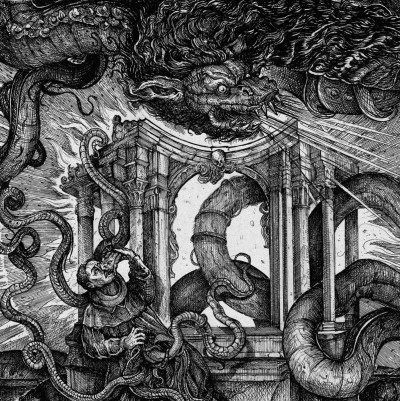 That Which Whets The Saccharine Palate by Yaldabaoth

Taking their name from a primal demiurge, a creator-pseudogod that dwells in fire and Chaos, it’s not surprising that the debut full-length from Alaskan avant-death troupe Yaldabaoth is a savage and bewildering affair. Even at its most blunt, it never swings in directly – it bobs and weaves, riffs fracturing and morphing to deliver maximum carnage with minimal fuss – and it makes for an experience that is often uncomfortable but merits repeated listens.

‘Fecund Godhead Deconstruction’ is a bold choice for an opening track, its serpentine intro one of the album’s most subtle moments. Comparisons with Shining and Bergraven are impossible to shake off but its collapse into fury is sudden and unerringly precise, vocals seesawing between low, animalistic death growls and higher black, metal-tinged screeches; it sets in motion an uneasy dance of primal rage and caustic satire that weaves throughout the record as a whole.

At almost ten minutes in length, ‘Megas Archon 365’ is the album’s longest cut (though not by much) and it plays out like a suite of refined malice. The opening riff is just a hurricane of tremolo that doesn’t make much sense on its own but as cleaner melodies and even a solid groove set in, that chaotic to-and-fro begins again. It’s unafraid to use empty space to make an impact and though the structures at work are progressive, shifting the goalposts almost incessantly, the complexity feels measured and orchestrated. That emptiness is redoubled by ‘Gomorrhan Grave of the Sodomite’, a song that almost be called beautiful were it not for the fact that it’s so steeped in filth. It stresses eeriness over brutality and it also lets rip with some of the record’s most arcane lyricism (“Skin cats as seen fit, each victim groomed to suit”), delivered with a sense of near-religious gravitas; it feels like it’s emanating from the halls of Bedlam, the madness profound and tinged with a mix of regret and fury. Yaldabaoth’s quietest moments are the ones where they feel the most unhinged, the parts that are closest to reality’s frayed outer limits, and the fact that so much of the album dances along this cliff edge is what makes exciting.

‘To Neither Rot Nor Decay’ and the album’s title track can be seen as two halves of a whole, but not simply because they are amongst its briefest cuts. One mirrors the other and while the first half of the record stressed disorder and duality within the songs themselves, these two approach in a more single-minded fashion. The former stresses atmosphere, the tension always bubbling but never rising to the surface, but ‘That Which Whets the Saccharine Palate’ is an assault on sense and structure that plays out like a Laveyan take on Deathspell Omega. Vocally and musically, it’s the most overtly technical experiment on offer and the strength of the guitarwork alone is promising enough to make future efforts worth keeping an ear open for.

As a closer, ’Mock Divine Fury’ feels more summary than swan song, delivering a wealth of solid riffs and some precise soloing throughout its near-8 minute runtime, but it feels almost cautious in comparison to what preceded it. Then again, who’s complaining? That Which Whets The Saccharine Palate is an album that works because it feels wrong and sounds great. It’s almost ungainly, like it doesn’t quite fit in its own skin, but like any good monstrosity, that is its beauty. Musical chimeras like this keep metal interesting and if this is what Yaldabaoth can deliver out of the gate, who knows what these titans from the frozen north still have in them.