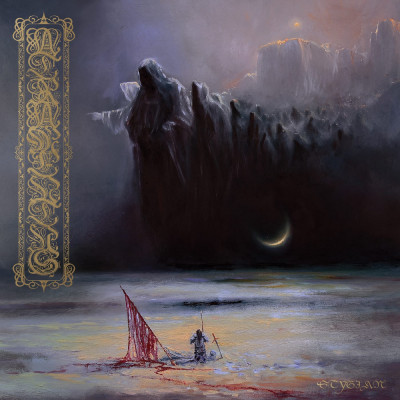 Funeral doom is an odd genre. Despite being, in many ways, one of the most extreme and challenging of metal’s subsidiaries, it has become – almost since inception – rather conservative. In other words, there’s seldom a band that comes along and challenges the form, and for whom people would later continue to acknowledge as still being rightly classed as funeral doom. As such, I have always found it a sub-genre that, due to those narrow boundaries drawn around it, produces three types of album: the utterly terrible and boring; the decent, but forgettable and destined never-to-be-replayed; or, the stand-out, excellent album that manages to nail the sound and takes its place alongside the jewels of the genre.

Atramentus hail from Canada. Born from mastermind Phil Tougas being caught in a blizzard in the winter of 2012 and, later on, suffering a difficult mental health period during the autumn of 2013, band members were added over the next few years, with a drummer being the final piece of the puzzle, as they did not want to press ahead with programmed drums. A five-piece who feature members who contribute to a vast host of (so far) much more active bands, the quintet has finally found themselves pulled back to the project – this monumental piece of work – and a concept that interlinks with one of Tougas and Claude Leduc’s other bands (namely Chthe’ilist). Stygian, marks their first ever recorded output as Atramentus, and the two larger tracks have been the principle music that has been sculpted during the past eight years.

Meticulous focus on the writing, production, mixing, mastering, conceptual and artistic approach has led them to their debut album finally seeing the light. Featuring members who are recognisable from their work in bands such as Gevurah, Sutrah and Funebrarum, to name just a few, Atramentus felt like ‘the real deal’ before a single note was heard, especially as their existence, to most, seemed like it was announced at the same time as the album was reported to be coming in 2020, and via the excellent 20 Buck Spin, no less. If you can’t tell by now, Stygian falls into the third type of funeral doom album – the one that stays with you and bears endless repeated listens – and in some of its’ final moments the record even manages to bring in some other elements that do challenge the mould.

Centring around the concept that a lone knight is granted immortality, that is bestowed upon him through the gift of the gods’ sword, only to see all that he ever knew and loved die as he witnesses the death of our Sun and the resulting pitch black Earth enveloped in crushing ice and an eternal blizzard, it’s certainly a fitting concept for an expansive, colossal funeral doom album. The album evokes the autumn of humanity and life of Gaia before being captured in a hopeless winter, stretching out into the embers of time, and with one uninterrupted, solipsistic view forever. Stygian is broken up into three tracks – the first at sixteen minutes and change, the second – acting as a bridge – coming in at just shy of five and the final track being the most gigantic, lumbering mammoth-like at a little over twenty-three minutes long. This leaves Stygian totalling at under forty-five, meaning despite the utterly epic nature of the two main pieces on offer, the album never feels like it runs to such an extreme length as to cause detriment to the listening experience.

Before I launch into a more detailed review of the music of Stygian, it would seem completely remiss to not pause to utter a ‘wow’ to the artwork. Unmistakably from the brush and canvas of Polish artist Mariusz Lewandowski, who’s dark, deeply evocative imagery has adorned recent albums by Bell Witch, False, Mizmor, Abigail Williams, Lares, Jupiterian and more, how absolutely perfect is this painting for the cover of such a style of music as Atramentus’? He’s also clearly got quite the taste in music, as not one of those aforementioned albums is anything short of brilliant. I’ve spotted a list of a handful of other records he’s allowed his work to be morphed into LP covers for in recent years, and I, for one, will be making sure to check out those ASAP, in the hopes that at least some more might be mined as sonic gold dust.

Atramentus’ debut opens with ‘Stygian I: From Tumultuous Heavens… (Descended Forth the Ceaseless Darkness)’ and the opening of our planet’s funeral dirge. Mournful chords reverberate around the desolate waste, crying out from a synth-laden, harpsichord effect. They almost sound like the hands of time ringing out from the heavens, declaring the end of all things. Humungous, smothering guttural growled vocals spill out over the dulcet sledgehammer guitars and bruising, smouldering drums. Almost immediately the greats of funeral doom are conjured, and with the harrowing bass and menacing synth playing, dark ambient acts immediately come to mind as well. From the first few minutes of this gargantuan tracks, acts such as Thergothon, Warning, Evoken and Mournful Congregation are ushered forth.

There is a depth to their creation that is truly awe-inspiring, and although very different, put me in mind of the context and complexity that came with Bell Witch’s Mirror Reaper. Atramentus, with their high-concept and penchant for bringing in some classic epic doom sounds, grandiose drumming and synths during the mid-point of the opening track, can also be deeply reminiscent of ‘classic’ bands such as Candlemass and, dare I say it, even Queensrÿche. Their sound is utterly, and completely all-encompassing, as only brilliant funeral doom should be, and ‘Stygian I’ certainly announces the band are a supreme force to be reckoned with. My only query would be whether the last minute or so of the track really adds much to the overall song, as the rest of the instrumentation falls away to leave the drums almost solo, slowly devolving and fading out. I think the fade out could have come quite a bit sooner, with this period being the only moment on the entire album that I felt didn’t feel deeply necessary and spellbindingly atmospheric.

‘Stygian II: In Ageless Slumber (As I Dream in the Doleful Embrace of The Howling Black Winds)’ is an ambient bridge between the two titanic tracks and is largely the brainchild of François Bilodeau, the man behind the synths. It is a neat piece that joins the album together conceptually, as our protagonist, having witnessed the end of everything, falls into a deep, but still restless, troubled sleep, hoping – one assumes – to sleep away eternity. But the black winds continue their endless fury [Atramentus being the deity of winds], with an energy slowly rising in the dark ambient soundscape created, before it whips up to begin verging on noise territory. Before it ever reaches bedlam, the voracity of this apocalyptic weather eventually wakes our doomed hero to winter; a winter like no other before and a winter without end.

Stygian closes with the simply mesmerising ‘Stygian III: Perennial Voyage (Across the Perpetual Plains of Crying Frost & Steel-Eroding Blizzards)’. Twenty-three minutes of riffs large enough to cause seismic movement on a global scale. Some of the best bands funeral doom and its associates have had to offer, such as Trouble, Esoteric, Fates Warning and Scald all occur as we traverse the bitter, frozen hulking pass of this track. Moving from gurgled, incredibly low vocals, to a more recognisable gruff and rough iteration, to epic, sumptuous choral work that recalls orthodox Christian singing, and – from a perspective of extreme metal – the incredible vocal work evident on Батюшка (Batushka’s) debut album Литоургия (Litourgiya).

Throughout its massive run-time ‘Stygian III’ never lets up or disappoints. It is epic in the very definition of the word. Despite the repetition and utterly bleak nature of the track, the album and of course funeral doom itself, the track – and indeed Stygian overall – has so much detail to offer to always remain interesting, nay deeply intriguing and bears revisits immediately. As a final salvo, Tougas and Leduc introduce a glacial, frozen cold black metal riff, where suddenly the huge mass that is Atramentus suddenly threatens to pick up pace, with the drums storming ahead out of the absolute zero ice, before as quickly as it comes, reminding us of the Atramentus-imbued black winds still blowing at horrific, numbing speeds, it fades into ambient reverie.

Xavier Berthiaume, their drummer and of Gevurah fame, is clearly a black metal specialist, and so his style – although having to fit into the funeral doom template – does have that vivid style reminiscent of the sunless north of America and black metal’s home in northern Europe. Berthiaume also mixed the record, and this approach does give the whole of Stygian a slightly different sound to many funeral doom records. There is a very subtle, blackened, or maybe it should be ‘frostbitten’ edge to it. Finally, the album was mastered by none other than Greg Chandler of Esoteric, rounding off the finishing touches to an, at times, unbelievably accomplished debut LP.

It should be noted that despite Atramentus currently enjoying being seen as a ‘new band’, they have been a project for eight years, with the majority of the two ‘main’ tracks on this album having been written for almost that length of time, meaning that this record in many ways is as old, if not older, than the material on the debut full-length of Chthe’ilist, for example. It seems that the band, like their protagonist, has all the time in the world, and have not rushed out this jewel (buried deep in the frozen ice).

Absolutely monumental, Stygian will be an album that stands the test of time and will surely elevate the band to a seat at the table of the often maligned, often misunderstood and wholly unappreciated sub-genre. Perhaps with their debut they can encourage more to delve into the bleak corridors of unknowing funeral doom inhabits. Either way, Stygian itself, is an essential listen this year.