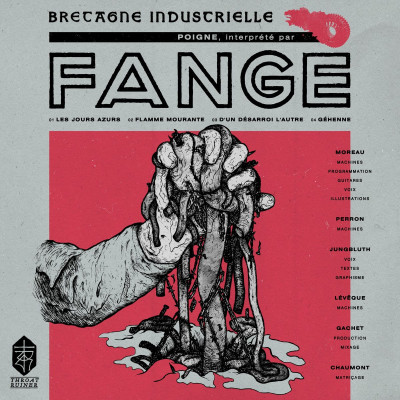 Fange are a band based in Rennes, France, and play a blend of monstrously heavy hardcore, thick sludge metal with some death metal proclivities and who have a great love of noisier industrial sounds, too. They call themselves “ignorant music for the educated man” and feature among their line-up, Matthias Jungbluth, who runs the fantastic Throatruiner Records (who are the label for much, if not all, of Fange’s discography). They also have a particular penchant for the letter ‘P’, given that each release begins with it; Poisse (2014), Pissotière (2015), Purge (2016), Pourrissoir (2017), Punir (2019), Pudeur (2020) and now Poigne.

As you can see from that discography listing, Fange have already released something this year already – Pudeur, a full-length album, in April. An abrasive, eight track LP, it is an impressive listen and one of the better records out this year that combine industrial and noise with hard, attacking metal, following very much in the vein of their previous albums, but with a greater level of refinement.

I have to take issue with their statement, as it’s immediately apparent from Pudeur and Poigne that Fange create anything but ‘ignorant music’. It might slam so hard that you lose some IQ points, but their musical concoctions are clearly meticulously crafted. It takes a high level of skill to meld together what can be quite disparate genres – despite so many wishing them to be kindly bedfellows – and it’s something the band have become increasingly respected for, in Europe and slowly further afield.

However, these is something always so exciting for me personally about Fange’s EPs. If there is ever a criticism of their full-length albums, it is surely that one, by and large, gets what one expects from it, albeit, as aforementioned, always accomplished with a greater degree of skill than the last. Their EPs, on the other hand, are when the band seems to let loose a little more. The invisible constraints come off and the shorter format begets more experimentation or those unwieldy compositions from the rehearsal room that did not fit within the tightly wound track-listing of an LP.

Like the Pissotière and Pourrissoir EPs before it, Poigne pushes the envelope of what Fange can do. Within the four tracks found on this new release, the band play with the harsher noise and industrial elements that make up their signature sound. Guitars fall by the wayside, and all other traditional sounds are either eschewed or put through their programming paces, produced in such a way to evoke perpetual paresthesia. It is loud and although not ignorant, it is certainly obnoxious in its’ sheer power. The EP is also a product of the pandemic, with the entire release written and recorded remotely during the peak of coronavirus ravaging France. Poigne surely fulfils the band’s long-time desire to expand this most extreme facet of their sound on a full release.

Poigne opens with ‘Les Jours Azurs’, a crest of noise breaking like splintered glass, raining down upon the ears, before the tortured vocals and thick industrial beat breaks through this veil of abrasiveness. Giving the track structure for much of its run-time, extra elements are brought into the mix, adding patina upon patina of noise and even some melodic streaks, which allows the track to become a weird mix of skin-peeling wall of sound and also strangely catchy. We then move into a slightly more recognisable industrial character with ‘Flamme Mourante’, a track that sounds like if Justin Broadrick and G.C. Green had erupted from Bretagne, rather than Birmingham. Thunderous, tortured machines wrench back and forth to create an abstract architecture for this song, that builds and builds in its three short minutes until it bludgeons itself into quiet.

‘D’Un Déssaroi ‘L’Autre’ is the track of the four that sounds the most ‘artificial’, with a shuddering, skittering opening, before turning into a unique slowcore rave for when we enter Blade Runner times. It sounds both danceable and pure evil. The harsh, obfuscated vocals are a relentless feature of Poigne and although often one of the strongest elements of this short project, I do wonder if this third track could do without them (or being quite so indebted to them, as prevalent as they are). The instrumental is quite enough – a powerful statement of intent from the band – and would have served as a bridge to the closing track, ‘Géhenne’, and allowed the maelstrom of voices it features to hit all the harder. The final track, despite only running at around five minutes of length, sounds absolutely epic, especially in light of the short running times of what has gone before, and the sheer majesty and crescendo of its construction.

Only four tracks long and fifteen minutes in length, on the surface and without context, this EP could be dismissed as the tracks that did not make Pudeur, or a small little release not worthy of too much note. But this would be a fool’s mistake, because Poigne may very well be the best thing the band have offered up to date. I do hope it’s recognised as such by many, including current Fange fans, as I, for one, dearly hope they incorporate more of this experimentation and boundary pushing approach into their next full length. This, alongside their exacting attention to detail in terms of performance and production (this mixed by Cyrille Gachet; mastered by Thibault Chaumont), would surely result in an album that would further set Fange apart as a band to be noticed on the highest international stage.