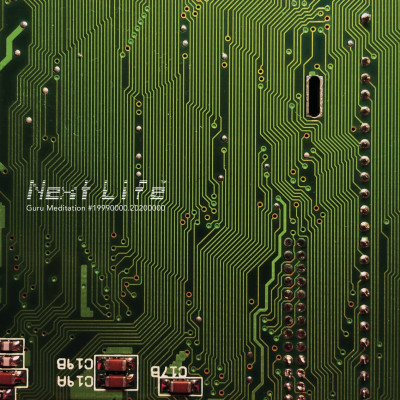 Guru Meditation by Next Life

Hailing from Norway, Next Life are not a band I have heard mentioned before, let alone come across, and that is a crying shame, because whatever one thinks about Guru Meditation and their sound overall, their name should be known.

Formed by Hai Nguyen Dinh more than twenty years ago, Next Life were one of, if not the first, to incorporate 8-bit computer synthesisers into metal. On the cusp of the millennium this was a wholly inventive and bewildering inclusion, especially when merged into what were the outer reaches of extreme metal. It was not then the sound that today we take for granted, due to artists such as The Locust, Melt Banana and Genghis Tron employing the futuristic melange to fantastic effect – and what were seen as genre-bending firsts. It feels entirely unfair and unjust that Next Life have not remained part of – and at the forefront – of that conversation.

Though one would classify Next Life as being primarily electronic, there are still strong influences from hardcore punk, grindcore and game music. The latter is certainly most prevalent in the back end of the duo’s most recent LP, and, as such, it seems easy to draw quick comparisons to Zeni Geva. Next Life are definitely an interesting proposition, having gone dark – in terms of releasing new records – since 2011 and suddenly reappearing seven years later for The Akashic Record and now with this year’s Guru Meditation.

It is relatively easy to see why Next Life haven’t captured the minds of those who should and most likely would have championed them, though. Notwithstanding the seven year gap in recorded output, the band have largely kept to touring the same small clutch of Norwegian alternative venues, seldom venturing out to even the adjacent Scandinavian touring routes. That’s no criticism, by the way. Anyone who has half a brain knows how much touring can cost personally and financially these days. And it should be noted that Next Life have been recognised by those in the know as deeply important to the building blocks of what is now commonly known as ‘chiptune’ and its incorporation into the alternative metal scene. They have opened for Mayhem, no less, in Berlin; played Incubate Festival in Tilburg; and did join a brief tour of the UK, supporting Canadian composer Owen Pallett (aka Final Fantasy) back in 2010.

Instantly impressed with the history of the band, how other’s clearly venerated Dinh in particular, and how they were a mainstay (albeit erratic) on the excellent Fysisk Format record label, I was excited to delve into the thirteen track thrill ride that represents Next Life in 2020 – Guru Meditation.

Kicking off with the track from which the album takes its name, we are launched into their own particular brand of musical rollercoaster, and what follows afterwards are another nine blistering tracks of dexterous chiptune metal interspersed with three tracks that are more ‘reflective’, all coming in significantly longer than the others (a minute and a half on average versus over three minutes in length for the trio).

At twenty-five minutes, Guru Meditation should feel like an extremely focused album, but upon repeated listens, I wonder whether it could have been tightened more, so that by unapologetically going for the jugular it would feel incalculably heavier and all the more insistent than it does. Even some of the ten shorter tracks could have ideas repeated one less time, or a few seconds of outro curtailed a moment faster. But the bloating does come from the trio of three-plus minute tracks, ‘Strength I’, ‘Dexterity II’ and ‘Intelligence III’.  Clearly the ambition behind the three epics of Guru Meditation’s world was to radically alter the pacing of the album. They achieve their goal, but at a cost.

Each time the next trench of shorter electronic grind tracks begins again, it feels as if the band and album are somewhat rebooting. This change of pace is questionable – for me the freneticism of the genre is one of its most exciting hooks – but eschewing my own personal taste, these tracks could still have provided some down-time for the listener while being tighter musical beasts in their own right. ‘Infinite Karmic Repetition’ is built in the same vein as the aforementioned three, but has a sub two-minute running time, and should surely have served as the gold standard for the others. Shave five or six minutes from the total run-time of Guru Meditation and it would be a deranged, incalcitrant speeding bullet of a record.

Next Life should be a name far more of us know, but whether Guru Meditation really hammers home that fact, is up for debate. There is plenty to admire here, including the excellent album artwork, but whether the album cuts through the sea of chiptune metal out there on Bandcamp and Spotify right now, is a question begging to be answered. For Dinh and his musical partner in this iteration of Next Life, Hans-Petter Lund Jørgensen, it’s a far busier world than in 1999, but I hope – for the sake of fairness, if nothing else – that Guru Meditation finds far more ears than previous albums have thus far. And despite my criticisms, I know I’d definitely be at a gig they featured on, if they do decide to journey beyond Norway’s borders, if and when they can.