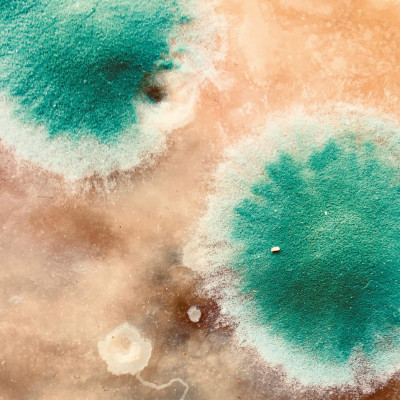 This is one of those collaborations you didn’t see coming but know immediately is going to be a winner. Primal Forms is in some ways a meeting of the ideas on their respective last records, a coming together to continue the journey. Sam Shackleton has wandered a long way from the dank post dubstep that made his name, last year’s album as Tunes Of Negation cast a wide net into the musical sea to pull up something drifting and hallucinatory. Meanwhile describing Wacław Zimpel as a jazz clarinetist, though technically true, evokes unwelcome images of Acker Bilk in a shiny waistcoat which are at a distant remove from the exploratory multi-instrumentalism of his remarkable Massive Oscillations album. Over three long tracks, their shared fascination for minimalism and spiritual musical traditions as well as avant jazz and electronics finds them heading out together into Jon Hasell’s fourth world.

The title Primal Forms suggests something irreducible, even basic, but this is music as a primordial ooze, fundamental elements stirred into a bubbling soup of possibilities. The cover image is a close up of some kind of mould, vivid green cultures spreading towards each other, growing and mutating. But it’s easy enough to shift perspective and imagine it as aerial photography from high above the earth. That kind of micro/macro cosmic spirituality vibe flows through it, they’re apparently aiming at a new form of ritual trance music. It’s not locked into heavily rhythmic repetition but constantly changing and recombining. The music doesn’t fidget but it never sits still.

The lengthy title track sets out on a pulsing bass drone and loose but resonant percussion. Zimpel’s clarinet spirals over it like multiple voices in flight. It reminds me of Material, then about six minutes in the image shifts to something closer to Kraftwerk heading out of the train station. Bright and hopeful as we roll along the hissing of brakes announces our arrival at somewhere colder and more mournful. The cliché of the musical journey may be well worn but here it’s just about unavoidable. It ends, or pauses, as wriggling electronics wear themselves out. The track break makes sense but really the music flows on into ‘Primal Drones’. Ten minutes worth of overlapping organ tones and Zimpel’s violin weaving slowly back and forth across it self, it moves from a calm first half into something surprisingly frenzied.

‘Ruined Future’ starts with appropriately dystopian dread, unmoored notes echoing across the space, dark drones and a thin organ line snaking through. About half way through, triggered by some lively Reichian percussion, I almost expect an avuncular travel narration to come in. Perhaps our guide might describe elements of our ruined futures, helpfully pointing out key details with his pipe. I recognise the voice I’m aurally hallucinating. I have to look him up but it’s Winston Hibler whose narration graced those weird Disney nature films from the 50’s and the original It’s A Small World album.

I wouldn’t ordinarily mention such a flight of idle fancy were it not for the telling contrast with Shackleton’s sampling of ‘Dark and Lonely Water’ on ‘The Branch Is Weak’ way back in his Skull Disco days. A public safety film of particular deep menace ‘Dark and Lonely Water’ featured a chilling narration from Donald Pleasance and has enjoyed a remarkable cultural afterlife on account of having scared an entire generation out of their young wits. It was a perfect match for the murky dread of his sound at the time. That my mind dialed up something so open hearted and wholesome speaks to the universal and healing spirit of this music. They probably won’t thank my subconscious for pulling out such a kitsch and mannered reference point, but the poor thing is exhausted and has to work with what it finds laying around.

Initially a little slippery and imposing, on repeat listens Primal Forms reveals itself to be welcoming and sonically rich. Two artists different approaches combining naturally into something organic and multilayered. I recommend it and hope they see fit to revisit this collaboration in future.