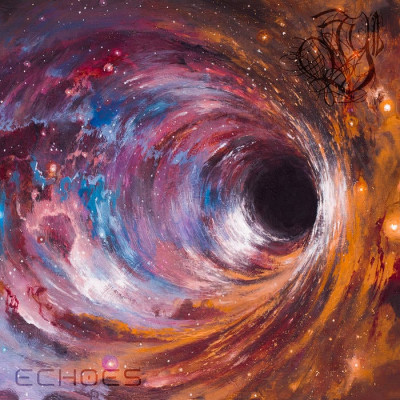 Extreme metal and science fiction are strange bedfellows. Certainly, in a style more strongly associated with po-faced snarling, or unironic attempts to summon the devil, singing about astronauts, aliens and outer space seems somehow ludicrous, a pastime reserved solely for silly curiosities. There are exceptions, of course; Voivod, Vektor and Darkspace, among others have gathered legions of admirers, and made fairly successful careers out of shrieking at the heavens. Yet, for a band to be fully immersed into sci-fi still feels a bit of a novelty.

Screaming into that void are Houston quartet Wills Dissolve. Formed in 2015, the band’s ambition was clear even on their 2018 debut, The Heavens Are Not on Fire, a complex, unpredictable concept album that barely had a song shorter than ten minutes. On Echoes they have gone even further, featuring just one, nearly 32-minute track and an involving narrative featuring a lone astronaut exploring a black hole in an attempt to find a way to save a dying human race. It is a bold concept, particularly for such a band with such little experience but somehow the Texans find a way to pull it off.

Musically, Echoes goes to many different places, but keeps its core influence as a death metal track. It would be near impossible to keep up a sustained level of intensity for that length of time and still keep things interesting, but Wills Dissolve seem to come from the Opeth school of death metal anyway, and are perfectly happy to showcase their love of 1970s progressive music. Indeed, the softer, more introspective sections are the highlight, led as they are by gentle luscious guitar sounds and Andrew Caruana’s soaring clean vocals, a majestic performance. That’s not to say the band can’t do heavy however, as some moments are crushing – particularly around the 17-minute mark where the punishing drum sounds crash together so much as to become almost unlistenable. The band have numerous tricks up their sleeves throughout Echoes’ running time, from crushing doom riffs, black metal inspired aggression and a vocoder-afflicted electronic sound that create a sound very reminiscent of early Cynic. There’s always something new around the corner, but Echoes never falls into the trap of feeling jarring.

Indeed, it’s this ability to create such a cohesive sound over such a long track that really makes Wills Dissolve so exciting. The band have supreme confidence in their abilities and a masterful knack of melding genres together. Echoes is not a perfect album – the intro feels a little overlong, while the ending doesn’t quite hit the definitive note that the band are aiming for. Still, to create an album this technically accomplished is quite an achievement for any band, let alone one with so little experience between them. Perhaps in a few years we will all be looking back on Echoes as the touchstone for the burgeoning sci-fi metal scene, but for now it remains beguilingly unique.