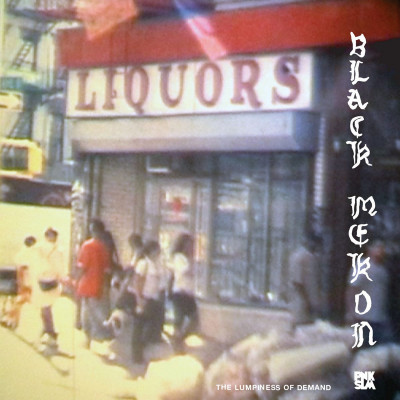 The Lumpiness of Demand by Black Mekon

On the front cover of The Lumpiness of Demand is a blurry shot of a cheap liquor store. Type of place the cashier lurks behind glass and they keep a bowl of lemons next to the till. Regular customers and mask pioneers Black Mekon swagger on out of there with a full litre of brain melting gut-rot and a fresh pack of cigs, babbling on about being illegitimate brothers both called Black Mekon and such. Lo-fi and low rent the brothers lay their shtick on thick. They gots more shtick than you can shake a stick at, like say. All black leather and grease and noise. They play garage punk blues in exhilarating two minute buzz saw blasts of jangling anxiety and broken distorto whine.

The time served Black Mekon logo is an image of Elvis as the Batman. Much like the sketchy joint on the cover there, friend, if you don’t know where you are going in, you ain’t got your eyes open. Yeah, it’s a back alley trashcan full of busted up old rock ‘n’ roll moves, rusted out and beat down. But the “chest wrenching panic” and desperate escapism is real. The broken bones of old jukebox blues and soul stick through the dry drum rumble and compressed high end. Cymbals splash and hiss and forever in-the-red gob iron wails and bleeds. It’s a sweet decay. Drop the needle and a corroded riff circles “Ladies and gentlemen speaking to you on behalf of Black Mekon…”

Twelve songs in under half hour they don’t hang about, launching in with a triple shot of squalling exhortation. ‘Feeling Good’, ‘Don’t Die’ and ‘Real Good’ all roll and tumble with explosive fervour and wild eyed recklessness. But this ain’t their first rodeo, Black Mekon made the very first album released on PNK SLM and from experience they know a little variety keeps things cookin’. The country malevolence of ‘Killing You’ sees them settle down and brood over dark thoughts and a bottle. The low key acoustic slide guitar is joined by what I think is a theremin but might easily be the weary ghost of an old machine.

The raw, back to basics feel is steered clear of one note boredom by a subtle range of sonic textures. Single ‘The Bottle’ is a surprisingly bright and brisk acoustic strum with a great distorted twin vocal and an amazingly clanky, ugly-beautiful solo. ‘Nice Nuke’ also features an acoustic but this time it sounds like its being dredged from the bottom of the canal, the solo is just a misfiring electrical buzz, the mud soaked cable burning out. ‘Rusty Guillotene’ has a stronger bout of The Cramps than usual in its lurch ‘n’ twist but the feel is more tight throat anxiety than Lux’s lust.

On the closing ‘Grave Diggin” another obvious musical ancestor, Jon Spencer, smiles down on some R’n’B testifying so magnificently distorted the words melt away leaving only the urgent emotional confusion. It spins out into the ether and there’s a lengthy silence before the final goodbye. A distant signal like a spirit trapped in an AM radio, a garage ghost, the lady in the radiator, a minute and change of regretful lullaby.

Black Mekon wear the mask to conceal their identity as they head into a rock ‘n’ roll fantasy, and drag you along for the ride. They don’t pretend otherwise. Hell, during lockdown they drank so much wine they mutated into an actual 2-D cartoon. Check out Tales From Christs Gasoline on the internets for their first adventures. I reckon its got legs, black denim clad legs. On the self referencing ‘Mekon Do, Mekon See’ a booming junkyard beat and see-sawing mouth organ bring some enjoyable ‘if Tom Waits were from Tyseley’ vibes. While ‘Black Mekon Is Your Daddy’ is an infectiously boiled down two note riff and title-is-the-lyric stomp working itself into a delirious frenzy before ending on a lovely Brummie whine of dismay. It’s brilliant!

As apocalypse looms on all sides, Black Mekon already sound like the burning wreckage. Garage will never die. So long as we can beat out a rhythm on the ruins and howl a simple phrase into the night it’ll offer that fleeting sense of escape from the ashes and the horror, from the lumpiness of demand. Brother, pour the wine.