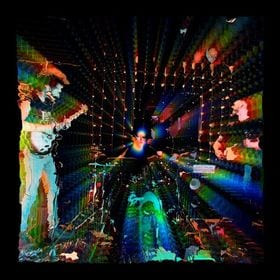 Deaths is calculated, pored over in its details, carefully executed, a piece of art that demonstrates real growth.

Twin God are a band who combine different elements of noise rock, sludge and math rock to create a dazzling cacophony of heavy and cathartic music to consume and get lost in. Twin God are about to release their brilliant latest EP Deaths on Nefarious Industries and Gavin Brown caught up with the band’s guitarist and vocalist Bryan Elkins to get an insight into Deaths and its creation as well as the history of Twin God and their musical progression, how Covid has affected him and the band, his favourite releases of the year, hometown Brooklyn and Jersey City band recommendations and his and the bands musical influences.

We are also proud to present an exclusive stream of Deaths on Twin Gods Bandcamp ahead of its release. Check it out below, it’s an immense listen.

E&D: Your new EP Deaths is out very soon. How did the recording process and creation of the album go?

Bryan: I knew these two songs were going to comprise our first release awhile ago, but the name and unifying theme didn’t come together until I was finalizing the mixes and realized what was happening there. I just wanted to use these two songs to debut because I felt they establish a fertile ground to grow from in people’s minds. The style is straightforward enough that they cut through, and they’re pretty heavy. I made the artwork last winter, though I think the original drawing is actually a few years old.

Recording was piecemeal. Drums at Ed’s home studio, bass tracked later by Ed, guitars recorded at Mike’s studio in 3 sessions that spread out over months, then vocals recorded in the car which was weird but fun. I didn’t expect to mix it myself, I was just picking guitar and vocal takes before sending it back to Ed to mix it and I guess I just started mixing it by accident and thought wait, I can do this. Turns out, I was right!

E&D: Sonically, what were the biggest influences on the sound of Deaths?

Bryan: The 3 of us have been writing heavy stuff together on and off for 15 or 20 years and are influenced by a huge range of music. But for stuff that directly relates to the sound, I’d say Black Cobra, Yob, Inter Arma, Melvins, Nirvana, Queens of the Stone Age.

E&D: Do you think that this is Twin Gods heaviest material to date and was that your intention?

Bryan: It might be, for what we’ve played together as a band. It’s not as heavy as what I’m working on now.

E&D: How do you think that Twin God has changed as a band since your last single ‘The Bones In Your Shrine Are Your Own’?

Bryan: That single was really just a demo. I liked how it blew through a bunch of different paces and vibes, so releasing that felt like a teaser. “We do all of these different things right out the gate, and the riffs don’t suck.” It wasn’t my best writing but it felt spontaneous, and I enjoyed the surprise when it turned out all these turns on a dime worked.

E&D: Do you feel that Deaths is a natural progression from that material?

Bryan: ‘The Bones In Your Shrine Are Your Own’ feels less mature, more spontaneous, less detailed, but it works and it’s fun to play. So it feels to me like the really early days, the kick in the ass that announced our existence, mainly to ourselves. Deaths is calculated, pored over in its details, carefully executed, a piece of art that demonstrates real growth.

E&D: What are your plans for further Twin God material in the future?

Bryan: I’ll be writing music for Twin God, and performing it where possible, for the next 40 years, assuming Im alive. Between COVID shutting down live music, and me moving to Brooklyn and us having a baby, I don’t have the clearest sense of a timeline, but our sound will grow both heavier and weirder as the years pass. The current material in progress is more thrashy, mathy, noisey, and deeply heavy than what we’ve performed so far.

E&D: How did Twin God start as a band in the first place?

Bryan: I was recording some really depressing acoustic music for my project The Described Mouth and one day my hard drive corrupted and I lost everything. Those were good songs but I walked away from it. The music itself had already been bumming me out, so this setback threatened to push me into an even darker place and I was like fuck this, I need to completely lose my mind and be really fucking loud again, start channeling my energy in the way that has always felt best. So I called Ed and our friend Mike and started showing them riffs.

E&D: As a band based in both Brooklyn and Jersey City, Who are your favourite bands from those places?

Bryan: For Jersey City, the main band I listen to is Worldsucks because they’re heavy as shit and fucking hate fascists / fascism with every ounce of their being. Whatup my dudes! And if they hadn’t asked us to play shows, we might have never played any. Then there’s Black Wail, they’re sick, all friends of mine, including Ed and Felipe who are also in this band. I was in Black Wail band but I quit after some really minor drama. I also listen to Sean Keily, and Jeff Taylor. Both are excellent songwriters.

Brooklyn has been home to some of the best, most insane experimental-heavy music in the world, such as Dysrhythmia and Imperial Triumphant. Though it could be argued Dysrhythmia are more Queens-based, every show of theirs that I’ve been to was in Brooklyn so whatever. Colin is in that band, he mastered this record, such a pleasure to work with that guy. As a composer I worship his stuff but I think I played it cool. Pyrrhon is sick. El-P (of Run The Jewels) is a genius. I could go on.

E&D: How else have you been keeping busy during this lockdown period?

Bryan: My partner and I had a baby in July, so that’s the whole picture of my life right there. Before the baby I was making the art for Bangladeafy’s new record Housefly, which I’m really proud of, I’m excited to be connected to the album. Ed and Felipe also play in Mike’s band Black Wail and they’ve gotten some work done, they have an EP coming soon. And I know Felipe’s kids are getting their chops up.

E&D: Are you looking forward to playing live again once gigs can start happening again?

Bryan: Can’t wait but also the idea scares me. We’re careful about this virus. My partner and I both caught it in March, and have lost people to it. Wear a mask, people. Take responsibility for your bubble.

Bryan: All of my sweat is solely due to the humidity. Also, catharsis. Screaming abstractions over sick riffs fucking rules. Also, culture as I know it has disappeared.

E&D: What has been the most memorable gig that Twin God has played so far?

Bryan: All of our shows have been small and mainly with friends, so they’ve all been pretty sick and satisfying. We played at Pet Shop in Jersey City with Atom Driver in 2019, I remember that was a great night, my parents met my partner that night and we hung out as a band with a lot of our friends for the first time in a long while.

E&D: Who are your all time favourite bands to catch live?

E&D: What have been some of the best albums that you have heard this year?

Bryan: RTJ4 is album of the year. Pyrrhon’s is just gnarly as hell. I don’t usually catch albums in their first year, so I’ll have to get back to you after the year-end lists all come out.

Bryan: Matt Pike, Josh Homme, Nine Inch Nails, David Bowie. The band Wrong do shit that really excites me, their album Feel Great is an obsession of mine.

E&D: How did you get into the heavier side of music in the first place?

Bryan: I wasn’t really a metalhead as a kid but I grew up obsessed with grunge music, especially Soundgarden. Tool’s Lateralus changed my life when it came out. I saw one of Dillinger’s first shows with Greg Pucciato, it was at Vintage Vinyl in Jersey, there were maybe ten people there. Our friend Joel showed me Meshuggah, or maybe that was Felipe, I’m not sure. Ed introduced me to Mastodon, I think about a year before Blood Mountain came out, and he gave me a copy of High On Fire’s Death Is This Communion for Xmas when it was new. I think I gave him Meshuggah’s Catch33 that same year. Ed and Felipe both put me on to Dysrhythmia just around when Colin joined the band. I didn’t hear Daughters or Botch until like 2010.

E&D: What have been some of the highlights in your time in Twin God so far?

Bryan: Every time a new song got to the point in rehearsals where it sounded and felt how I had imagined it. But by far, making this record.