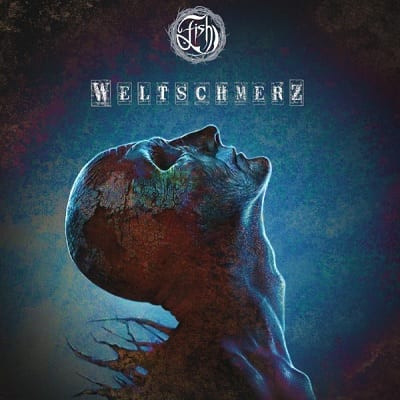 For nearly 40 years, Fish has come a long way as both a singer-songwriter and as an actor. Between his time with Marillion from 1981 to 1988 and as a solo artist releasing his 1990 debut release with Vigil in a Wilderness of Mirrors, all good things must come to an end. This year, Fish has released possibly his eleventh and final studio album on his own label, Chocolate Frog Records with Weltschmerz.

This album was five years in the making for Fish. And to bring this album to life, is a way to say thank you for being a part of his journey. The album’s title translates between “World Pain” and “World-Weariness”. He went through various hardships in his time. The loss of his father, his elderly mother moving into his care in January of last year, and operations on his hand and spinal surgery.

Not only that, but the Orange Fruit Cake moved into the White House after winning the presidential election in 2016, Brexit, Refugee crisis increasing tenfold, and the Civil War destroying Syria. Fish himself went through writer’s block. And then COVID-19 hit. But with Weltschmerz, he has finally come full circle.

‘Garden of Remembrance’ reflects on the good times. You could tell that Fish is fighting back tears detailing some of the tragic, emotional moments he went though. But it also details the loss of a loved one. Knowing that while they’re in the afterlife, you always keep their memories with you forever until the end of time. ‘This Party’s Over’ has a Celtic Folk upbringing. Soaring guitar riffs, clapping to the rhythm, and a killer sax work done by Van Der Graaf’s David Jackson, the final door is about to be closed, knowing that it is going to be one hell of a party.

The title-track details the dangers on what is to come in the 22nd century. Like giving us a final message on the warnings that lay ahead after we’re all gone. The guitars have these raunchy blues textures that reminded me of Lindsey Buckingham with some soulful sequences to preach the gospel while going into some middle-eastern vibrations from the string section of the Scottish Chamber Orchestra. ‘Man with a Stick’ begins with an intensive percussion that goes into an effect of clock ticking like crazy. Dooming guitars and bass, strange synthesizers with a bluesy twist, and revealing the reflections on who you’re friends really are. They are admitting to being bullied, abused, having so-called friends who go behind your back and betray you, knowing that it is payback time. It’s pushing the doors down with a gigantic battering ram that has a hardcore punch.

‘Grace of God’ has a Krautrock atmospheric opener in the mind of Klaus Schulze before acoustic guitars and trip-hop electronic drums walk into the jungle of a pilgrimage to seeing what the music industry has become. Fish is really understanding to give the young people a chance to wake-up, by telling them that what we are looking is what George Orwell had envisioned in 1984.

The 15-minute piece of the ‘Rose of Damascus’ is a walk through the parallel universe on who this character is. He’s bringing a movie inside his head to life throughout his lyrical composition. Epic atmospheres brought to life with a moving tempo and clapping rhythm section as you dance into the forests with a folky-pop section before Fish’s spoken dialog comes out of the blue with some rising orchestral arrangement to make the volcanoes erupt. And then you witness the fall of Rose herself as she struggles to carry on, but death is right around the corner. But on the last three minutes, there is a sign of hope to release all of her electrical powers and possibly go out in a blaze of glory.

‘Waverly Steps (End of the Line)’ is Fish’s advice to his younger self during the Jester-era. In it, he’s letting himself know that while he’s doing some good, there will be some bumpy roads and the hardships that he will take. When I was listening to the guitar and horn sections on here, I can imagine that Fish was listening to Miles Davis’ ‘Freddie Freeloader’ to get some inspirations behind the arrangements. However, there are some alarming bits thrown in. Classical piano sequences, romantic melodies that he follows by looking at his life one last time and saying farewell to both the Jester and his Misplaced Childhood before bringing the curtain down.

The hardships on ‘Walking on Eggshells’ details on how to keep going without heading back to square one again and again. It reflects with sadness and the pieces of the broken mirrors you smashed, it comes back to haunt your life. But there will always be a Guardian angel watching over you. It is their conscience to guide them in the right direction as Fish returns to the Celtic Folk sounds once more on the ¾ time signature sound with ‘C Song (The Trondheim Waltz)’. I always imagine Fish listened to The Pogues ‘Dirty Old Town’ for inspiration. It shows that Fish is more than just the Prog jester, but revealing a huge piece of the puzzle thrown in perfectly to bring it all together with a gospel background with a militant drum work to bring it all to the forefront.

Theodor Seuss “Ted” Geisel once said “Don’t cry because it’s over, smile because it happened.” I’ve been doing a lot of thinking of that quote when I was listening to Fish’s final album. And I think what Dr. Seuss was trying to say is that while it is hard to believe that it’s finally over, we understand why it happened and we smile not only is this the end of an era, but an amazing journey that we’ve embarked on with Fish. And with Weltschmerz, the circle is finally completed.