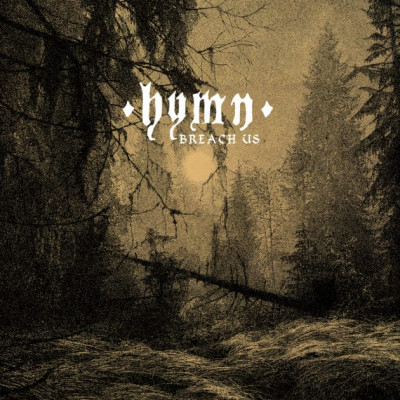 Breach Us by Hymn

Hymn is a duo from Norway, singer/guitarist Ole Ulvik Rokseth and drummer Markus Støle, and despite playing together in various bands Breach Us is only their sophomore album, following Perish in 2017. Although there are only four tracks here it feels like an album rather than an EP. The intention was to record the album with the same set-up as for their live shows, and so what we have here is 38 minutes of stream-of-consciousness sludge metal, played totally off the hip, let loose on the listener’s eardrums.

Opener ‘Breach Us’ starts as it means to go on, with a wall of down-tuned, treacle-thick riffage, heavy as an advancing glacier, and moving just as slowly. The sludgey guitar is underpinned by the freeform drumming of Markus, which fills the gaps in the music, and overlain with Ole’s anguished howls. The music is allowed to breathe at times, where the riffing lets up and there is more space for atmosphere. ‘Exit Through Fire’ plays like a jam session. I can just imagine watching two guys battle this song out on stage, reacting to each other, taking the tune where the mood takes them. The song uses the same motif repeatedly, a simple turnaround, to cut through the wall of noise. You can hear every chord change, every twist and turn, yet it’s still crushingly heavy, with Ole’s vocals threatening to tear him apart.

‘Crimson’ takes a turn, giving the album a lot more space only hinted at on the first two tracks. After a much more fast-paced opening section, it gives way to doomy riffing and a change to a cleaner vocal style. This is where Hymn are at their most compelling. It shows an understanding of light and shade, the ability to change gear, to alter the sound and feel of the experience, to keep things varied and interesting for the listener. There’s a section in the middle of the song where nothing happens (no riffs) for about a minute, and the tension builds almost unbearably until it’s released by a heavy outro. Hymn’s Bandcamp page calls it meditative gargantuan riff metal. I couldn’t put it better myself.

There’s a guest female vocalist at the start of the final track, ‘Can I Carry You’ (sadly unnamed in the notes provided). This track is another freeform jam session, kicking in at just under 15 minutes, and it is at times intense, open and atmospheric, but always heavy. The long, spacey outro with occasional crunchy basslines is a particularly good way to end the album. What starts off as sounding like, possibly, ‘just another noisy sludge album’ transforms into a far more interesting beast. There’s light and shade here, lots of atmosphere, with progressive flourishes, but it’s also always reassuringly heavy. This all goes together to make Breach Us well worth checking out and Hymn ones to watch for the future.