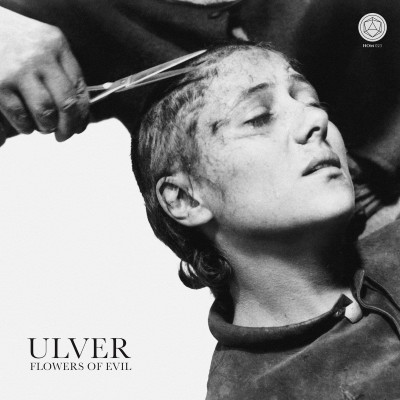 Flowers of Evil by Ulver

Ulver have long embedded themselves as the choice band for the avant-garde connoisseur. The Norwegians’ ability to reinvent themselves, coupled with an air of pretentious impenetrability has given them a cult following, one that stays loyal regardless of whichever style of music the band are playing this week. Indeed, since transcending their early days as part of the infamous Norwegian 90’s black metal scene the band have never made the same album twice. A cliched phrase, perhaps, but it is never truer for a band than it is for Ulver – their sonic explorations have already taken them through the realms of electronica, rock, ambient, noise and trip-hop just for starters. Until now, each record they release is a unique event, often seeming like the work of a completely different band.

Which is why I have always found them a frustrating beast. They brush against genres, forming something that is efficient and well made, with moments of greatness but ultimately feeling somewhat insubstantial. Now, however, for the first time they have stuck with a sound – Flowers of Evil is a direct follow up to 2017’s The Assassination of Julius Caesar, a sound that has also taken in the EP Sic Transit Gloria Mundi. Its odd to see the band stand still like that, but hardly surprising, as The Assassination… was a great achievement for them, stripping away their meandering excesses to create an album of paired back synthpop earworms. It seems to be a sound their mastermind Kristoffer Rygg enjoys, and Flowers of Evil continues with the same danceable pop sound.

Flowers of Evil also continues the trajectory of the previous album in a narrative sense – ostensibly a journey through history, the lyrics essentially boil down to a lot of religious symbolism and apocalyptic proclamations. A facsimile of chart topping 80s pop this may be, but this is still an Ulver album, and there’s plenty more depth than that might suggest, as subtle references and hidden motifs abound throughout. It is all held together by Rygg’s silky smooth vocal performance as he throws out an air of swaggering, uncaring cool, strutting into the end of the world.

Unfortunately, the tunes don’t quite measure up as well here as they did on their predecessor. ‘One Last Dance’ gets things off to a good start, filled with moody atmospherics, a vibe that carries on with single ‘Russian Doll’. It isn’t until the zippy ‘Machine Guns and Peacock Feathers’ that things get more urgent, with tracks such as the jaunty disco of ‘Nostalgia’ and the paradoxically upbeat ‘Apocalypse 1993’ adding pep to proceedings. Elsewhere, things are a little slower, with the distortion of ‘Hour of the Wolf’ and the dreamy closer ‘A Thousand Cuts’ adding menace. Nothing here sounds particularly bad, but there are few “wow” moments, and nothing to live particularly long in the memory. It is a shame, as there is plenty to like about this sound, but it feels like the band have intentionally reined themselves in.

It’s hard not to talk about Flowers of Evil without referring to The Assassination…. Listen to that album first – it is the start of the story, and ultimately it is the better album. It feels odd to say, but Ulver have stagnated somewhat – it is hard to blame them, with 30 years of constant innovation and a retrospective book coming out, the band are well entitled to take a nostalgic breather. If you liked the previous album, this one is also worth a listen. For everyone else, just sit back and hope the next one is more to your liking. That’s both the best and worst thing about Ulver – it is never long until they are a completely different band.