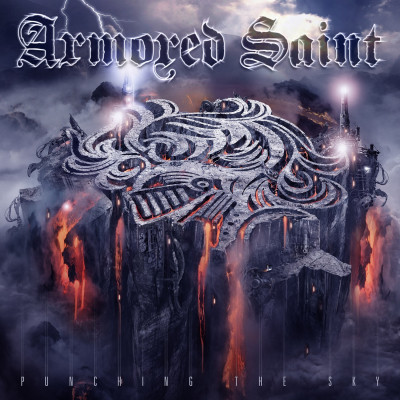 Punching the Sky by Armored Saint

In the week when the rock world was shaken into collective mourning with the news of Eddie Van Halen losing his battle to cancer, also coincided with the arrival of a new AC/DC song. This reminder of the early eighties was firmly cemented when I bagged the new Armored Saint album. Yes, John Bush is back. And for this old rocker, who believes he doesn’t dwell too much on rose-tinselled nostalgia (well, I don’t read the Rock Candy magazine at least), diverging into all things 80s rock and metal has been a most welcome respite from current modern world (pandemic) problems.

Back in the early eighties there were a few distinctive sub genres in flow – NWOBHM, the growing MTV popularity of glam/hair metal, and the latter’s consequent reaction – thrash! Filling the void somewhere in the middle between the first and the latter sub-genres were the John Bush led Armored Saint, a band who had the grit and power of Iron Maiden and Judas Priest, but while stopping short of speed metal were most definitely-a leather n studs outfit and inclined to be seen supporting those young thrashers, as they did for Metallica. And for further confirmation that they were appreciated and respected by those thrashing mad upstarts, a decade or so later John Bush did indeed front Anthrax.

For Punching the Sky, it is both a relief and high praise that Armored Saint haven’t messed with the formula, but instead have tightened it up and sound even better with age. Bush and co sound refreshed and full of vigour, fine tuning their sound which should leave Saint fans indeed punching the sky, or the air at least. And the whole album is a great combination of hard rock grit and melodies.

It is a very accomplished whole band team effort – Jeff Duncan and Phil Sandoval on guitars, bassist Joey Vera, and drummer Gonzo Sandoval – plus a top-notch production by bassist Vera aided by the same engineering team that worked on the Saint’s previous studio album 2015’s Win Heads Down. But, there is no doubt the heart-warming effect is hearing John Bush’s distinctive voice still sound so well-oiled and ageless. It’s as if his tonsils have been frozen in time.

There is a purposeful confidence to the whole sound of this record. The Enya sounding intro to opener ‘Standing On The Shoulders Of Giants’ leads to an epic encounter of assured riffage, classic twin guitar soling, a rousing chorus, and a band who sound better than ever. And if that didn’t raise the horns then ‘End Of The Attention Span’ most certainly will. Scatter gun drumming opening, melodic riffing but with a purposeful metal attack. There is nothing wrong with their attention span just yet.

In fact, the whole album holds your attention. ‘Bubble’ and ‘My Jurisdiction’ are finely assured accomplished arranged songs, with melodic verses leading to great choruses. ‘Fly In The Ointment’ uses the loud/quiet formula to great effect. While ‘Do Wrong To None’ possesses excellent metallic riffing crunch, which recalls John Bush era Anthrax. While lyrically John mainly keeps it ambiguous for the listener to adjust and adapt their own meaning.

It always warms the cockles when an older band is-able to keep their dignity and integrity intact, but for Armored Saint they go several upgrades because Punching the Sky is arguably a career best. The Saint go marching on.