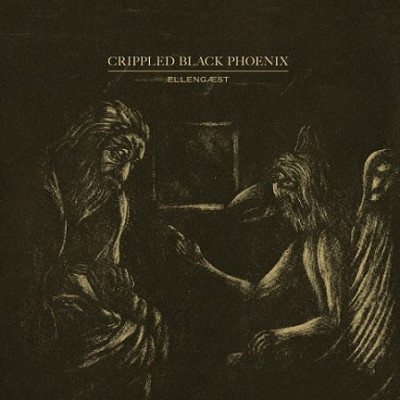 When Crippled Black Phoenix came to start tracking their latest album Ellengæst, they found themselves without a male lead vocalist and keyboard player, after the departure of Daniel Anghede. Rather than let this setback defeat them, they enlisted some music friends to help. Making guest appearances are Anathema’s Vincent Cavanagh, Gaahls Wyrd’s Kristian “Gaahl” Espedal, Coliseum/Fotocrime/one-time Crippled Black Phoenix touring bassist Ryan Patterson, up-and-coming solo artist Suzie Stapleton and Tribulation’s Jonathan Hultén. Although this is quite the spread of artists, at no time does the album feel patched together or disjointed. Produced by Justin Greaves and Karl Daniel Lidén, the sound is immense and majestic throughout.

Opener ‘House of Fools’, sung primarily by Vincent, rolls in with Helen Stanley’s sombre trumpet before being brutally swept away in a flurry of raging guitars. Like the modern world anything of beauty is to be trampled on. The heightened sense of doom permeates and the chorus has the thunderous might of a Godspeed You! Black Emperor track. The song ebbs into a passage of serene piano and the lone trumpet shows up again, battered but still alive. A funereal beat signifies trouble as sirens wail intermittently and the shit storm of guitars crashes back, this is an epic open to the album, and leaves you in no doubt as to the tone of the record.

A toy box chimes out an eerie intro to ‘Lost’, which features an astounding and exasperated vocal from Belinda Kordic. The swell of guitars into the chorus is seismic and encapsulates you in a full blooded way. Vincent hollers ”We are lost as humans!” and you will feel guilt at anything you have done to bring about the decline of civilisation. The overriding feeling this song brings is one of sheer hopelessness and an abandonment of all that is good. Justin pounds out an apocalyptic stomping beat that never lets up and the guitars screech and soar, it truly is a powerful song.

‘In the Night’ starts with a sampled heart-breaking narrative from a young girl. that I won’t attempt to summarise as it needs to be heard for full impact. The song winds its way round you like a serpent with only one black outcome on its mind. Belinda’s contributions are ghostly and utterly tragic, “live to fight another day” is repeated over the band blissing out into a Pink Floyd-ish soundscape of liquid guitar solos and searing organ. As the track builds to a crushing crescendo Gaahl powerfully roars the same lyric like some mystic god of war and it is terrifying, truth be told.

The galloping ‘Cry of Love’ worried me slightly when I first heard it, but the song is one hell of a grower and the bridge/chorus combination is a mighty thing to behold. The melody is strong to match the majesty of the music and I now find the song one of Crippled Black Phoenix’s strongest. Ryan growls “Time is a cruel enemy and it’s too late” and the terror heckles ride back down your spine. As the song rises Andy Taylor and Justin’s stunning guitars swirl and spin out beautiful melodies. Incredible.

‘Everything I say’ is a tender (power) ballad where Belinda purrs like Edith Piaf and as the band layer on the noise her voice becomes intense and powerful, to mesmerising effect. There is a palpable rage throughout this album as the sound is immense and unrestraint, trying to overpower you and pin you down. It’s expansive yet claustrophobic at the same time, the album is extremely bleak in outlook. It is relentless and a difficult listen, but enthralling and absorbing at the same time.

The dark ‘(-)’ is a sampled interlude of a man speaking graphically about his depression. Again, I won’t relay any of it to you as it will diminish the power of the content, but my word, it really strikes into the soul. Considering the world we live in today, you may find yourself teetering on the edge at this point. Be warned…

At last a little ray of hope comes with the almost friendly guitar that introduces ‘The Invisible Past’. I say hope, it is still imbued with an air of despondency but the tones are brighter and after what has just gone by, you’ll take anything to lift the mood. There is a correlation between Crippled Black Phoenix and Pink Floyd and I hear it a lot in this song as the piano and guitars lay out a blissful backdrop for Jonathan to tenderly sing. The spacious sound widens as the atmospherics stretch out into the ether with lovely cooing sounds and delicate chimes. The clouds crack open and rays of golden sunshine pour through as the band burst into a wall of sound, crashing drums, soaring guitars and Jonathan reaches for the sky with some powerful falsetto, showcasing an outstanding vocal range. Over the course of its massive 11 minutes, the song sprawls at the end with intense solos and piano splicing the storm with precise stabs. Having been held down for so long with a darkness that is almost over consuming, you are left feeling euphoric and glad to be alive. A smile will play across your face. A tear will roll down your cheek…

Mood lifted, the oddity that is the Bauhaus cover ‘She’s In Parties’, which tries to be playful but just sounds at odds with the other songs. I think the album would have been better ending with ‘The Invisible Past’, but there is obviously a reason why this song is located where it is. The opening quote in the PR for the album does state “One thing we’ll never do is stick to the rules and stay within the box.”, so who am I to question?

Fans of Crippled Black Phoenix know what to expect with their records, but I found Ellengæst to bring a level of darkness that is even more bleak than usual. At times, the album terrifies with the thoughts it provokes and it really isn’t to be listened to if you are feeling the strains of this wicked world right now. The band are in fearsome form though and there is a thunderous rage that I think I’ve only heard before on a Godspeed You! Black Emperor record, so this is quite an achievement for all concerned. I wouldn’t recommend this album as an introduction to Crippled Black Phoenix, but for the already initiated, lie back and let it take you over.