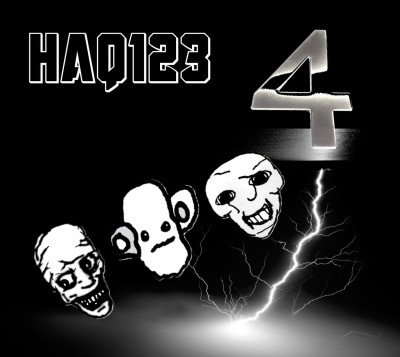 Look out the haq are back! Seems like Haq123 have kept themselves busy over lockdown. After an experimental release back in spring they’ve already made a fourth album called, unavoidably really, 4. Four albums in three years, these kids don’t have time to waste. This one finds them folding some of those wilder, weirder, ideas back into something a little more direct. Perhaps. Their sound splitting between atmospheric electronics and great blasts of sludgy riffs, 4 works those contrasting elements ever more naturally into one another.

Lengthy opener ‘The Truth According to Graham Dyer’ is all spacey electronic glides and dubbed out vocals pondering the big question, what is truth? The sparkling start turns to drones and distant industrial clanks beneath a darker meditation “sad truth… depressing truth… uncomfortable truth…” The complex emotional web around the notional good of truth just hangs there, staring at you. It’s a very 2020 mood. The titular Mr Dyer is, I assume, he of Hominid Sounds, familiar to some of you from the front row of countless gigs, a bearded, grey haired eminence. The cold bite of his wisdom “trust no one, least of all yourself” reveals itself towards the end over warmer but uneasy ambience. Given Haq123’s habit of using found text as lyrics, I can’t help feeling that a follow up version ‘The Truth According to Danny Dyer’ is something I would very much like to hear.

First taster from the album ‘It’s A Hard Life If You Don’t Weaken’ draws again on the mystic pronouncements of elders, this time one of their grandmothers. The churning bass and scabrous vocals space out after a minute into a long, soothing sci-fi outro. It’s one of the most densely layered things they’ve done, revealing new details on every listen. And yet, the ridiculous “sausage!” sample seems to catch me off guard every time. Both ‘Elements’ and the final ‘Three a Day’ are short ‘n’ filthy, punchy sludge blasts but mostly the tunes here contrast the more abstract electronic elements with explosions of punk-metal noise.

‘Neighbours’ kicks off in full fuzz mode but breaks down about half way as if the pedal board shorted out and tips into a dub version second half of wibbling electronics haunted by the ghost of Woody Woodpecker. Similarly the weird jaw harp loop that opens ‘Falling of The Human Worm’ becomes another thick slab of doom, this time more chaotic as everything fights it out towards the end, even briefly calling to mind the fried swing of The Butthole Surfers.

After that they get a little more atmospheric. ‘Live Alone – Die Alone’ (surely the perfect title for a James Bond in the care home supernatural chiller) rages briefly before the processed vocals and doom notes stretch out into a synth-prog coda, steadying your nerves for the 8 min horror-drone epic ‘Fortress Of Distress’. The sometimes clanky sampled intros are gone, or have now mutated into synth colours and are better integrated into the tunes which, in turn, run smoothly together. If the last album Evil Spirits Who Prowl About The World Seeking The Ruin Of Souls could feel at times like four very separate tracks, 4 has a flow that carries you through from start to finish. Haq123 have further refined their attack into a protean pre-teen metal that feels confident in itself and open to all possibilities. Or, y’know, it’s sick, fam.