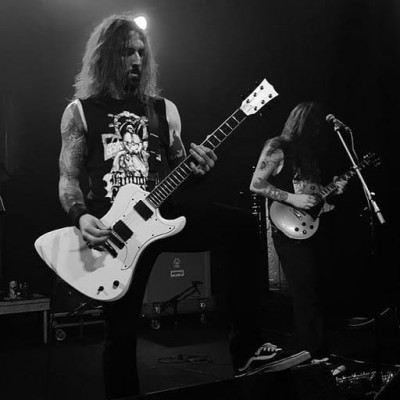 I didn’t even intend to make a new album this soon, but every time I picked up a guitar, some of my best riffs were just falling out of me.

Spirit Adrift have just released their new album Enlightened In Eternity and it marries the bands doom metal heritage with an even more prevalent traditional metal sound and the results are fantastic. Gavin Brown caught up with the Spirit Adrift mainman Nate Garrett to talk all things Enlightened In Eternity and the band’s development as well as his involvement in other bands including Gatecreeper, picking covers, and the mighty Black Sabbath.

E&D: Your new album Enlightened In Eternity is out now. How did the creation and recording process of the album go?

Nate: I wrote and demoed the songs from March – June of 2019. We then fine-tuned everything until January of 2020 when we recorded the album. I didn’t even intend to make a new album this soon, but every time I picked up a guitar, some of my best riffs were just falling out of me.

E&D: Do you think that the album is the most vibrant and epic album that Spirit Adrift have done?

Nate: For sure. I believe that this is objectively our best album, in every way possible. It’s definitely our most epic and varied, that’s for sure.

E&D: The album artwork is very striking. Who did it and do you think it sums up the albums music?

Nate: I had a vision of the album artwork as I was writing the first song ‘Ride Into The Light’. The goal with this album was to make a triumphant, empowering, timeless metal album and carry the torch forward into the future. We want to protect the sacred tradition established by Sabbath, Priest, Maiden, Metallica, Pantera, High on Fire, and bands like that, and carry that tradition onward in our own way. The cover reflects all of that.

E&D: Can you tell us about the battle dogs that adorn the cover?

Nate: That’s Dawkins and Lizzy, Marcus’s dog and my dog. They both died leading up to the recording of the album. We wanted to make them immortal in the album artwork of what will hopefully become a classic and highly revered metal album. I can’t think of a cooler, more powerful tribute. We also used their collars as alternate percussion on the last song of the album.

E&D: Can you tell us a bit about the epic video you have done for the album track ‘Screaming From Beyond’ and what the themes from the video and song are?

Nate: I’ve had the idea for that video since our first album. I had no idea Guilherme would make it so epic. He is incredible. I’m blown away by his tenacity, work ethic, and ability to unify our vision and his vision to make something truly special and reflective of the themes of the song. That song is a ghost story. But the ghost is trauma, grief, and pain. I’m also fascinated by the innate human drive to destroy ourselves. That theme is present in the video as well.

E&D: This is your fourth album in five years. Did you always want the output of Spirit Adrift to be prolific?

Nate: I’ve had zero intentions whatsoever from the beginning of Spirit Adrift until now, other than the make the best music I can possibly make. I don’t personally care about maintaining a high output, it’s just what happened.

E&D: Are you working on any new music at the moment?

Nate: Yes. I have about 12 songs demoed. I’ll probably write about 30 this time around and we can narrow it down to an album’s worth of material. We’ve never approached an album that way. I’m also probably going to be starting another studio project here in Texas with a friend of mine. We’re not taking it that seriously but we’re already talking to a label and we haven’t even done anything. So we’ll see.

E&D: How else have you been keeping busy while the world is dealing with this pandemic situation?

Nate: Writing music, managing the band, running our online store, raising two puppies, getting involved in buying and selling property, trying to integrate into our beautiful small Texas town, hanging out at the studio, hanging out at the record shop, enjoying nature, and that sort of thing. I have an uncontrollable drive to stay busy at all times.

E&D: You’ve got a livestream gig coming up for the release of Enlightened In Eternity. Are you looking forward to the gig and do you think it’ll be strange without a full on audience there?

Nate: To be honest, the live stream stuff is more for that fans than it is for me. People really need music right now and this is the closest thing we can give them to a live show, considering the band and our team is spread across three states and two continents. I’m glad we can play some new songs for all our fans across the world, but I would much prefer to do it in person.

E&D: Will you be playing most of the new album at the gig?

Nate: We’re playing several new songs which were going to become part of our live set this year, plus some old songs. It’s going to be short because of technical constraints, but it’s also free to the public.

E&D: Spirit Adrift recently covered ‘Supernaut’ by Black Sabbath on the Magnetic Eye Volume 4 redux. How fun was it be a part of that and do that song?

Nate: Yeah, that recording session was a lot of fun. One of the best times we’ve ever had in the studio.

E&D: Aside from being an amazing song, what was it that made you want to cover ‘Supernaut’?

Nate: We were initially going to do ‘Snowblind’, but they gave it to Bongzilla, who dropped off the project completely. Fortunately, your own Green Lung stepped up to the plate and took on that song. I love that band and I can’t wait to hear their version. ‘Supernaut’ was our second choice, but that song has always been special to me since I was a child. Those lyrics totally corrupted me and made me look at life from a totally different perspective. It’s also John Bonham’s favorite Sabbath song, so that rules. I think maybe other bands shy away from it as it’s a bit of a challenge to live up to the original. But I absolutely love a challenge and I’m very proud of what we did. People seem to universally love it, which always feels good.

E&D: How big an influence are Sabbath on the sound and outlook of Spirit Adrift?

Nate: They’re the band that made me realize I wanted to be a musician and throw away any hope for a normal life. Every metal band owes everything to Sabbath, whether they acknowledge that or not.

E&D: You also covered Roky Erickson and Jimi Hendrix on the Angel & Abyss Redux EP. Do you love putting a Spirit Adrift twist on these songs?

Nate: Yeah that was fun, especially the Roky cover. I mixed that myself which is a first. The Hendrix song was weird for me to put out there, because I’m so exposed. But there’s no room for fear or uncertainty in this game, or in life. I’m glad we did that EP, we raised a lot of money for a good cause. We’re not all talk when we say we want this band to make a positive impact on the world. That’s the primary goal. Make the best music we can make, and help people.

E&D: When you first started Spirit Adrift, did you feel like it was a reawakening for you musically and do you still feel that way about the band?

Nate: Absolutely. I was really close to death leading up to writing the first Spirit Adrift songs. I’m still not quite sure how I’m even alive. When I got sober and got a second chance at life, this music just came pouring out of me like a river. And it still hasn’t slowed down.

E&D: Who are your biggest influences both as a musician and on the music of Spirit Adrift?

E&D: What have been your most memorable moments in your time with Spirit Adrift so far?

Nate: The last European tour we did was incredible. I had a total meltdown in Prague when I saw all the castles and stuff. My mind could not make sense of those objects. They look like something from a fantasy movie, but they’re real. We don’t have anything like that in the US.

E&D: How did you enjoy your time playing guitar for Gatecreeper?

Nate: Ups and downs like anything else. I love those guys and I’m grateful for the experiences we shared. I dedicated a huge chunk of my life to that band, and I don’t regret a thing.

E&D: You have also been in so many other bands like Take Over And Destroy and Queen Beast. How were those experiences playing in those bands?

Nate: Same thing man. Ups and downs. Again, I don’t regret a thing because it was all a learning experience. Only counting bands that have released recordings and/or played live in front of other people, I’ve been in 29 bands. Every single one of them was a learning experience and a total trip. Wouldn’t change a thing.

E&D: Spirit Adrift, Gatecreeper and Take Over And Destroy are all completely different in style while all still being resolutely metal. Do you feel that you are still captivated by all different types of metal music?

E&D: How did you get into metal in the first place?

Nate: The same way everyone else did. Black Sabbath.