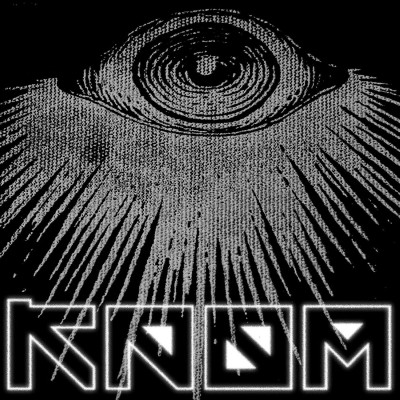 The second self produced EP from Swedish four piece KROM, Misplaced is a weighty chunk of dark and swirling rock. It seems pretty well suited to driving into the long dark night of winter. Lead tune ‘Hibernation’ comes in on a needling guitar line and thumping bass churn, there’s a touch of Evil Blizzard there, particularly on the vocal, but don’t let it alarm you. On the surging chorus vocalist Peter Hageus intones “all I really want, all I really need is hibernation” which certainly resonates loudly with how I’ve been feeling lately. It comes with a claustrophobic video they shot on phones, all dim coloured lights through smoke and flashing strobe which brings a faint hit of that loud-band-in-small-room thrill we’re all missing.

As they’re from Gothenburg it feels a little too easy to call them goth but it does seem like a starting point. The cold synths over thick moody guitars and muscular rhythm section definitely have some roots there. Less the type of band to indulge make up and costumes more the dark and thundering post punk of Red Lorry Yellow Lorry. The sort of bands who always denied they were goth anyway. They drag that gloom through the later 80’s psych-grind of the likes of Loop and some moves from the heavier corners of post-rock. Familiar elements then but they make something of their own with it.

Escape is something of a lyrical theme, ‘Missing’ stomps dramatically about the place as Hageus ponders “I wouldn’t mind getting lost for a while.” The circling guitar part at the end is about as close as he gets to a solo, generally preferring to sit within the roar of the band and that’s just fine with me. ‘Next’ drops the tempo to a dirty bass crawl but spaces out in the middle, bad vibes in a lonely room. It picks up again on ‘Pushing’ as a bright synth line and crashing dynamics build up to a steady chant of “keep on pushing me” over and over. The central section has a jolt of that Loop juice I mentioned earlier and then returns to its stern mantra. It does not sound like they appreciate the motivation, it’s more like a threat.

You have to imagine the final tune ‘Leave’ is a killer end to their live set. Doubling right down on the themes of escape and their tendency to driving repetition its relentless beat smacks you in the forehead and powers a monomaniacal Stooges riff. Clean synth floats over the dark, stormy guitar but only accentuates it’s unstoppable sense of forward motion and singular purpose. You’ve heard this before of course, but they really pull it off in raging style, “leave the confines of your mind, leave your claustrophobic head, leave your awkward flesh, leave everything behind.”  Yeah, that sounds just the ticket about now mate.