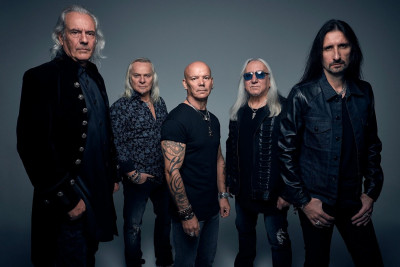 If you’ve never heard the bands music before, it would be a great collection to have as it covers everything the bands pretty well done recording wise

For the past fifty years, Uriah Heep have been making much loved music and to celebrate and document this impressive milestone, they have just released an expansive box set entitled Fifty Years In Rock. Gavin Brown caught up with Uriah Heep singer Bernie Shaw to hear all about the box set, a new album from the band, the quest to return to touring and the effects of the pandemic on the band and a whole Heep of tales from his time with the band.

E&D: You have just released a new box set entitled Fifty Years In Rock. Can you tell us a bit about the box set?

Bernie: It’s very large, very heavy, very cool looking indeed and by all accounts, very concise, Mine has just arrived last week. Not even opened yet!

E&D: Would you say that Fifty Years In Rock is a good starting place for anyone getting into the music of Uriah Heep as well as diehard fans?

Bernie: If you’ve never heard the band’s music before, it would be a great collection to have as it covers everything the bands pretty well done recording wise. Different line ups through the years and musical trends often make slight changes to the bands overall sound, so it would take you through a very musical journey, that’s for sure.

E&D: Is this the most extensive collection of Uriah Heep material that there has ever been?

Bernie: Yes, as far as l know. (Can’t be too sure with a works full of counterfeits and snide bootlegs going around).

E&D: Have you got any plans for an album of new material at the moment?

Bernie: Yes, we have and still are planning on recording our 27th album early next year. The studio is booked (The Chapel), the producer (Jay Ruston) is at the ready (both the same as Living the Dream) and the whole band have been busy putting ideas together for a good strong Heep album!

E&D: How has this pandemic affected you and the rest of the band?

Bernie: It’s been crippling and stifling. Musically and financially. Heep are a ‘working band’ and like anybody else, has to be out there on the road to earn money. Our crew, management, agency, everybody connected to the music industry has been hurt. No money for US from the government! So we’ve all had to pull our belts in a notch or two during this Hellish time.

E&D: How have you been keeping busy during this lockdown period?

Bernie: I’m married, I’ve got two young kids (14 and 10) so I’ve been busy every day with them. Heep are usually on the road around 200 days a year….. every year! So it’s given me time to be a proper husband and father to my family. I’ve loved every minute of it, and so have they. (We weren’t sure how long the novelty would last of having daddy being around so much!) I haven’t missed a birthday, or anniversary or any family get togethers this year, and that’s a FIRST. It’s given me time to do and fix all the ‘projects’ that have been sitting on the shelf so to speak. Painting, fixing, cleaning, clearing, selling, buying, the list goes on.

E&D: What has the reaction been like to your last album Living The Dream?

Bernie: Amazing. The fans, both old(er) and new have really taken to it. And why not…It’s a killer album with a dynamite production. It’s a true Heep album from start to finish.

E&D: Have Uriah Heep got any tentative touring plans for next year, depending on what happens with gigs?

Bernie: Yes, of course. This year 2020 as you should know is the 50th anniversary of Uriah Heep. Added to a normal work load of touring and summer festivals, we had a special “Anniversary Tour “ booked to carry through into 2021. Now with the Covid situation, we’ve been forced to move and /or rebook the entire years work into 2021. We of coarse lost a few shows to unavailability of venues, but on the whole, our agency has managed to rescue at least 80% of the shows booked and lost this year. So ROLL ON 2021!!!!!!!

E&D: If you do, will the gigs be celebrating fifty years of Uriah Heep’s music?

Bernie: Yes of course, but we might have to rename it ‘50 years plus 1’ tour.

E&D: What song do you love singing the most with Uriah Heep and what makes it so special?

Bernie: Oooooh. Difficult question to answer truthfully. There are a few songs that over the years have taken that spot. And for different reasons too. Right now, it’s been Daveys song ‘Grazed by Heaven’. It’s SUCH a belter!! Was brilliant to record and such a perfect show opener too. (You should see the look on the people’s faces when the curtain drops, smoke plumes go off and we come thundering out playing that song!) Yet l still like the closeness and personal interaction l get when l sing ‘July Morning’ You can hear a pin drop when l sing that.

E&D: What have been some of the best gigs you have performed with Uriah Heep?

E&D: Were you a fan of Uriah Heep before you joined the band?

Bernie: Yes I was. I had a few of their albums (on 8 track!) back in Victoria, my home town. We even played a couple in my garage band Cold Sweat! (‘Stealin’’ and ‘Easy Livin’’). I’ve always like groups that had big backing vocals and harmonies. Also a lot of Frank Zappa… l loved copying Flo and Eddies vocal falsetto!

E&D: What led to you becoming the singer of the band?

Bernie: A long story short. I was singing with the band Praying Mantis before Heep. We were doing our final show to a crowd of loyal fans before hanging up our boots at The Marquee club on Wardour St. in London’s West End. The place was mobbed. Unbeknownst to us, Mick Box was in the audience checking me out as he was losing his singer Pete Goalby. After the show he came knocking, bold as brass, at the dressing room door. He told us that he’d been in the back the whole show, singing along with me to see how our voices jelled. He thought it could work, so we went back to my flat in South London and talked… and drank… and talked…. and drank some more (I found that like me, he enjoyed a good Vintage Armagnac), we drank and talked all night. It ended with a huge hug and a sloppy kiss and the phrase “I think I got myself a new singer…” I told him, if we do this together, I promise never to let him down. That was 34 years ago. He was the best man at my wedding and we’re still the best of mates. I went to meet the rest of the band at a rehearsal room in North London. When they finally got out of the pub, we knocked out ‘Stealin’’ and ‘Easy Livin’’ for the audition.. (funny l picked them??) that was it. He told me to “go buy a good suitcase, you’ll need it”, never a truer statement did I hear that year..

E&D: Who are your biggest influences as a singer?

Bernie: Burton Cummings from The Guess Who for sure. Sammy Hagar for sure. Robert Plant. Mark Volman and Howard Kaylan (Flo and Eddy) definitely! Even when they were still both in The Turtles.

E&D: Do you have good memories of playing in the bands Praying Mantis, Stratus and Grand Prix and what were some of your favourite times with them?

Bernie: Of course! These were the bands that l flew half way round the world to find and be a part of. Canada could only offer me work in a ‘cover band’. No club owner wanted a band that dared to play their OWN MUSIC! Where it was the total opposite here in the UK. I auditioned for Grand Prix (still called Paris) the week I arrived in London. Was given a lyric sheet of a song they’d just written (called ‘You Know it Can Be’) and l was asked back 2 days later. I got the job and had a great time with them. I signed my first record deal with them, to RCA. 7 year, 7 album deal. Unheard of in those day, just as punk was really taking hold. We did a huge European tour supporting Manfred Mann’s EarthBand. 10,000 people a night! That’s where I started to hone my craft as a front man. We also played the Reading Festival in 1980. Unbelievable! And because RCA owned their own fleet on limousines, we were each picked up from our homes and taken out to the site in style. We took the stage as l remember to a full crowd of over 40,000. They did it know us from Adam and consequently we got bottled badly, and not good reviews. Not slamming our music ! But just WHO were these guys and WHY did they all come in limos! Bad move. Praying Mantis was a different flavour, heavier musically, still harmony vocals, but we didn’t play live very much. We too played at the Reading Festival in 1982. Happily we didn’t get bottled …. much! Stifled by bad management and no record deal made it a tough band to be in. I took on a full time day job as a chef. Kept it until I joined Uriah Heep. Stratus was just Praying Mantis with a different drummer. Clive joined us as he’d just left Iron Maiden, and Dave Potts gave up the drum stool to manage the band full time. We wrote new stuff, we demoed what we had but nobody wanted to invest. It was rough times for melodic rock.

E&D: What have been some of the proudest moments of your career so far?

Bernie: With a history like Heep have, there have been many. Russia has got to be up there with the top few. Over 180,000 people over the 10 shows, let alone seeing Moscow for the first time. Playing in Kiev after an election to an outdoor crowd of 140,000! Playing in Berlin State Park to 110,000 East Germans right before the Wall came down. Raining cats and dogs, and not one person left for cover. They just stood there in the rain and sang. Playing my home town the first time with Heep and having my mom and dad see me singing. Getting my first platinum album, and giving it to them. Proud moments? They’re still coming!