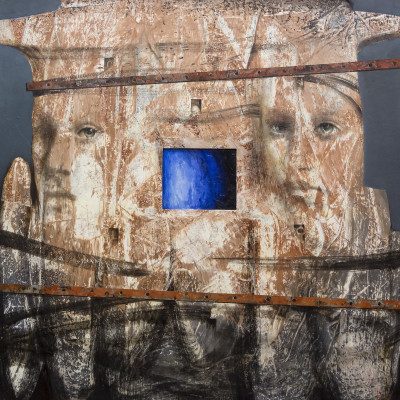 Constantine Skourlis is no stranger to crisis. Whilst he was in a Lesbos cave weaving together his masterful debut, Hades, small boats bearing the broken bodies of human beings began making their way towards that very same island. This became one of the worst humanitarian tragedies in recent memory. Now, 3 years later, with the world in a bafflingly worse state, his follow up Eternal Recurrence is being unleashed.

Art has long dealt with the cyclical nature of humanity. From Nietzsche to Camus, Vonnegut to Hofstadter to Danielewski, this concept has been sewn, unpicked, and stitched again. Most recently, the much revered German television series, Dark investigated these ideas accompanied by a deft and dramatic score from one of Skourlis’s contemporaries, Ben Frost. Always we return to problematic pasts as if we cannot move forward. We are haunted by mistakes of bygone eras and mistakes of the future that doom us to repeat those of the past. In spite of these troubling challenges, a hope burns in the heart of us. Not necessarily a hope for a better existence, even, but a hope that simply gives us the courage to be. That internal strength is what lifts us out of the rubble of our lives.

Whilst the portents might allow for a line of thinking that puts the cart before the horse, Skourlis’s records are not akin to Slothrop’s erections. His work is reactive. Not causal. That our times are so tempestuous as to result in such stirring art should be cause for concern. How bad can things get? And, terrifyingly, how compelling can Skourlis’s music yet become? The cycle seems to continue.

Second track ‘Reality Cancelled’ seems to accept this. It is one of grief’s many puzzle pieces that make up this record. A piano tries to find coherence. A narrative to understand it all. Sizzled strings jut in to confuse whilst squealed drones remain low in the mix. Tight, gristly, knotted clumps of noise cough into place. It’s like a fist of magma pushing through the speakers. Whiter sheets of distortion coat proceedings but it’s that gnarled, crusted, slab of nature bellowing out like a wounded planet that really takes centre stage. At times this is a sociopolitical record. Other times geopolitical, or ecological. It’s also deeply personal… A human response to all of the above. It’s all of these things rubbing up against one another, sparking, chipping, and soothing.

‘Lethe’ is a clear case of glancing backwards, of looping round. Named after the blue pill river of the Underworld (a drink from which causes complete forgetfulness) it seems to instil the notion that if you don’t study history, you are doomed to repeat it. If you forget the lessons of history, you are doomed to repeat it. And wilfully ignoring those historical lessons will doom us all to repeat it. The track itself is cautious, uncertain. Seems to be sending out feelers into the dark. That familiar rumble that chains all of Skourlis’s work together, here, leads the way. Voices waft about in the heavens. The unconscious never forgets. The wound is still there, unhealed and septic. Scars tell tales but this hasn’t even scabbed yet.

Album closer, ‘Ascension’, is formed from the same dark rumbles and squalled snippets. Long bowed notes from the Halldorophone charge up like an engine gradually revved into existence. Climbing from the lowest end with mids piercing via clinks and scythes, warbles and squeals then drown out the voices. In the end it is the steady act of persevering sub bass that sees it through. The consistent drone which guides us out. In a similar manner ‘Reckoning’ calls to mind the trudge of tanks. Of pistons pumping blindly. It sounds like industry gone feral, re-wilding.

‘Atonement’, in comparison, is all panicked piano blisters. An urgency to get things right via knee-jerked responses and ill-thought-through decisions which are then punished by torrents of crashing noise. A sawed cacophony. Slow motion flagellation. The retribution will be drawn out. This eye doesn’t blink. It stares. Then there is the sixth track, ‘Elegy’, which appears with a snaking coronet that oscillates between the strings like an open throat, gurgling and chugging. Wordless but never silent. It contains hallowed sounds fighting to be heard and a sense of transcendence, of breaking cycles.

What was even more striking, re-listening to Hades in anticipation of this new record, was its repeated use of intense build ups that give way just prior to the moment of crescendo. The tension increases and increases before dissipating right as it approaches an almost unbearable zenith. Defying expectations. Like a lost future predicted yet never fulfilled. This seemed, in many ways, to echo the plight of the aforementioned refugees at the time. So much pressure to withstand. So much potential wasted. So much life obliterated before it could peak.

In contrast, Eternal Recurrence delivers those pay offs but not necessarily as they might have been hoped for. These pieces reach the, often brutal, climax before then switching focus to recovery from the assault. It investigates the trauma left over after the explosive impact.

This is most evident on the openers to each side of the record, ‘Collapse’ and ‘Destroy False Idols’. The former rises up as ominous booms toll out over a creeping drone. There is the hint of a slow heartbeat. Vocals gently scream as they escape from the twitching and rippling undercurrent. Stuttered and strangled they merge with the distorted electronics. It crackles at the edges. Glorious yelps cut through. A shuffling pressure rises. Before the collapse, a rush. Like a great wave rising above a city already forsaken. It builds and builds. The city is already history. It just doesn’t know it yet. Racing rhythms reach for the apex, stumble, keep on going. Angelic voices that flutter from the void, slowly insisting upon their reverence, summon the fate. Then, within in a blinked eye, nothing. Remnants. Sharp strings and voices compete. In that void, a new darkness emerges more spiky and vicious than before. It’s too much. We turn away, refusing to meet its gaze. Is this a lucky escape? Or a harbinger of horrors still to come?

‘Destroy False Idols’ feels likes science erupting against misinformation. Electronic pulses obscured beneath distortion burst out through the opaque sea. A violent act that shows us how to deal with lies and liars. Destroy. False. Idols. It calms after that. A heartbeat slows and then ratchets up again. Like any evil, the first death is just for show. It must be removed time and time again. Whack-a-mole for the hopeful. It escalates, desperately seeking support and reinforcement before disappearing right at the point of confrontation. Mutating, shifting, and evolving into something that throbs and weaves deep beneath us, out of sight and slowly slipping out of mind.

This could be viewed as a reaction to personal experiences. After all, who is lucky enough to have truly escaped trauma? Or it could mirror the current shifting global political systems. Systems that sought out change and built themselves up to it only to discover that it was more schism than progress. The divides caused as Trumpism burned through the wider world were worse still than any situation that led to his initial appointment. With his recent election defeat, does this mean that the backlash of his presidency has killed the ideas that led to it? I’m not so sure. Within the wordless voices that adorn Skourlis’s music lies a scathing critique of the whispers turned cheers “Trump is dead, long live Trump”.