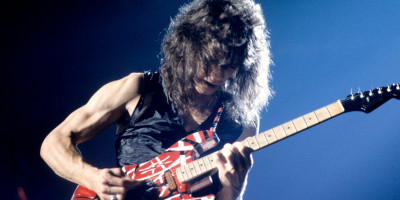 By: Geoff Topley and Adriana Ciccone

It’s been a few weeks now since Eddie Van Halen (EVH) passed away. Two of us here at Echoes And Dust wanted to put together a tribute for EVH to express what his music and talent meant to us. We start with Geoff…

I can still remember the day I ventured into town to buy the cassette of 1984 on my twelfth birthday. I’d previously purchased the 7” of ‘Jump’ and was blown away by the flurry of that jagged keyboard sound and the sass and swagger the song oozes. That may have been the start of my love affair with Van Halen. It was a long time ago. Another possible entry into their music might have been a cassette my big brother had been listening to, Diver Down, which is one of my favourite albums to this day. In between the covers, there were some amazing instrumental interludes, created by one of rock music’s greatest guitar players and musicians, Eddie Van Halen. Now Eddie is gone.

I wanted to write some words about Eddie as a tribute, but I can’t convey just how great a musician Eddie was. Even though I’ve been a big fan ever since 1984, sticking with them even when they didn’t keep up the high standards set in the glory days, I know virtually nothing about Eddie as a person. But reading comments on social media from those who did know him lets me know the sort of person he was. As with other artists who have passed away, I have a strange way of dealing with this, listening to their music when they are gone introduces a new level of appreciation. Maybe it’s because they aren’t around to make more music?

When you go through Van Halen’s back catalogue, it is apparent that not everything they did was gold, but even if the song quality dipped, Eddie still provided exceptional guitar. He was utterly unique and I can’t name another guitar player who covered such a range of styles with such skill. He punctuated every song with amazing flourishes and was constantly spinning out sublime riffs and solos, little tangential thrills constantly shooting off, but never obtrusive. Some guitarists settle into a particular sound and they let that become their trademark, but Eddie was always working on new sounds and textures and being incredibly inventive. That’s what made him great.

It wasn’t just the guitar playing though, Eddie was also incredible on the keyboards, many of Van Halen’s greatest songs have unique sounding keyboards all over them too. A prime example being ‘Jump’ and another track off 1984, ‘I’ll Wait’, which is driven on some pumping synths that never cease to amaze. I also want to mention those amazing harmonies that feature so prevalently, this added another dimension to the Van Halen sound that other bands just didn’t have.

Going back to those cover versions, listen to how Eddie transformed ‘You Really Got Me’, ‘Where Have All The Good Times Gone?’, ‘(Oh) Pretty Woman’, and ‘Dancing In The Street’. He had a superb way with melody and infused pop into his playing, then there was that solo in Michael Jackson’s ‘Beat It’.

I don’t know enough about the technical aspect of guitar playing to adequately comment on what exactly Eddie would do with his guitar but he ran the full range of techniques and rolled this all up into one amazing style that we’ll never hear the likes of again. He did this while being a great showman, tough trying to compete with David Lee Roth or Sammy Hagar on the same stage! He always played with a huge grin on his face, he made it all look so easy. Eddie Van Halen was taken from us too soon, he was only 65, there are many fans deeply saddened by his passing. A true rock legend and unbelievable musician, rest in peace Eddie.

I think I was 10 when I first heard ‘Jump’. That keyboard reeled me in and never let go. I would go nuts each time I’d hear it come on the radio. I remember trying to jump as high as David Lee Roth did in the video for the track. I also remember trying to figure out the keyboard riff on my little Yamaha PSS-30 keyboard. I never managed to sound quite as epic or kick as high as Roth did though!

Funny enough, it was only after Eddie’s death that I realized it was Eddie who wrote and played the keys on VH tracks. I just always saw him as a guitarist. As a kid, I would say, “EVH is the Mozart of our time!”. He composed incredible guitar riffs. He played the guitar as no one played it before. His guitar playing was unique and complex. I couldn’t see him playing anything else, which looking back was a bit closed-minded of me.

I learned that Eddie and his brother Alex both started on classical piano as kids and that later on, Eddie was interested in learning to play the drums. Only after hearing his brother play the drums, and sounding incredible at it, did he switch to playing guitar, and the rest is history. How cool is that?

I had the opportunity to catch the band live a few years ago when they reunited with David Lee Roth. Joining the band on tour was Eddie’s son Wolfgang. It was a great concert filled with displays of friendship, family and great music. I felt lucky to have had the opportunity to see the band and watch EVH on the guitar. I never thought it would be my only and last time seeing him and the band play live.

Only after his passing and reading tributes to EVH did I realize just how much he had influenced so many musicians I admire and love today. Maybe if it wasn’t for him they wouldn’t have picked up the guitar. Who knows, but just for that reason alone, I thank EVH for his musicianship and what he fostered in generations to come: the wonder and magic of music. Rest in peace EVH.