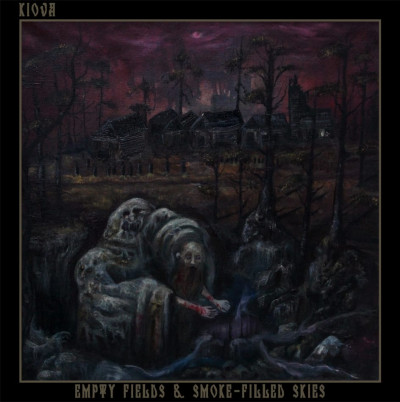 Kiova are a band purported to sound like Oathbreaker, Fall of Efrafa and Envy blitzed in a melting pot, with a dash of Finnish musicality added to the mix. Across three tracks and over twenty minutes, the quintet makes their case on new EP, Empty Fields and Smoke-Filled Skies.

Opening with ‘I – The Great Famine’, the band fashion a rhythm section most definitely reminiscent of the UK crust punk stalwarts, perhaps more identifiably influenced by their debut than the two latter epic parts of the aforementioned’s trilogy of records. The d-beat drumming and hammering bass, creates an irresistible forward thrust in their music. The robust, chugging guitars bring to mind something a little more voluminous than Oathbreaker and more ostensibly metallic than Envy, however. Coupled with newly inserted vocalist Janne Pussinen, their approach feels like The Ocean at their heaviest.

The longest track on offer here, at just shy of nine minutes, is ‘II – From Man of God to Voracious Beast’. It is far more expansive and takes on the more transcendent tone that Envy can indeed invoke. The whole track is expansive and impressive, but it is when Kiova become more introspective that their music relaxes without losing the artistic tension they seek. It is in these moments they become more reminiscent of the European and American epic screamo that Envy ran alongside and have toured with in the past two decades. Bassist Christopher Livingstone also provides back-up vocals throughout the EP and at times on this central track, his come to the fore. There is something impassioned and evocative in his intonation that raises the track above and beyond (he also does so on the last track). When Janne and Christopher come together there is a little bit of magic as they trade back and forth briefly.

‘II – From Man of God to Voracious Beast’ features sparkling guitar work, taking its cues from some of the finest post-metal and, on more than one occasion, its close musical cousin, post-rock. The latter very much comes into play on final track, ‘III – A Glimpse Beyond’. Opening beautifully, the band crescendo once again to a more epic screamo sound than the punk/metal of the opener. It is in this sound that they undoubtedly are strongest. However, the band choose to do quite a 180 degree switch up during this third instalment, moving back into more metal territory in the mid-section, before being enveloped in tremolo guitars to transition nicely into a varied, inventive close.

Empty Field and Smoke-Filled Skies is an EP of real potential, for a band forging forward and still, I think, finding their sound. Or, perhaps that conclusion would not be the case if this were only a fully realised album. The EP format for these tracks seems too frustrating, constricting and somewhat confusing. With other tracks surrounding them, and persisting in variation, perhaps making call backs to those genres previously referenced and even having some parlance of leitmotif, then potentially the vast differences between the three tracks would be more virtue than head-scratcher. Because, despite them being impressive and enjoyable, they are so different that I can’t say I found that they hung together particularly well, despite the same excellent production being evident on all.

Individually each track is worthy of praise, but with only three on offer, it’s difficult to understand what Kiova are really offering the listener. The only caveat to this, of course, is that they have delivered three extremely worthy tracks – meaning whatever they do offer in the future, I, for one, will be pleased (and intrigued) to press play.