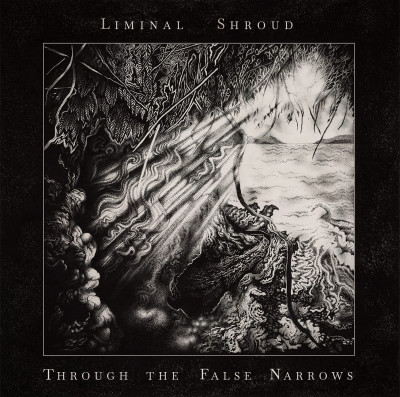 Through the False Narrows by Liminal Shroud

Liminal Shroud are a relatively new band, based in Victoria, British Columbia, Canada. The trio have produced a raw black metal sound since their inception in 2017. The following year came a much vaunted demo, three of the four tracks of which are reworked here. Through the False Narrows is their debut album and is released by Hypnotic Dirge. The band are the first local band the record label has released since their relocation to Victoria.

Before I delve into the seven tracks that make up the almost hour runtime of Through the False Narrows, I think it’s worth highlighting the major issue I have with the record. I am a fan of raw black metal, but I have a limit to what I’m prepared to call ‘raw’ and what I would determine to be poor recording. Sadly, I believe the latter is true here. I reach that conclusion due to the lack of balance found on the LP. The guitars sound good, although weedy in places. The vocals pack a decent enough punch, too. But the rhythm section is not done justice whatsoever. I struggle to hear the bass much at all and when I do it sounds muddy and lacks any punch of menace.

The drum recording is not good. What is all the more frustrating is that this seems like a simple issue of how the room and the drum set was miked up. When two thirds of your overall instrumentation are not firing on all cylinders, not sounding quite how they could or indeed should on the record, then clearly the overall sound of the LP and listener’s own enjoyment of it is going to suffer. There’s a heroic mixing job done by the band’s own Aidan Crossley, which mitigates some of the aforementioned issues at times, but unfortunately for Liminal Shroud the damage had already been done.

Right, now that’s out of the way, let’s get to a review focusing on the music. Happily, we can move onto positives almost immediately. Through the False Narrows is an album bookended by two eleven-minute epics, with five other tracks averaging about six and half minutes encased within. The record opens with ‘A Hollow Visage’ and wrong foots the listener’s expectations with a robust yet deeply melancholic doom passage before it transitions into the far more expected black metal maelstrom. Influenced by their evocative surroundings, of misty forest and wind-scoured, frozen coast, Liminal Shroud wield a spacious version of black metal, allowing tracks to breathe and the listener to reflect between passages and even between riffs. It is effective in that their ability for musical storytelling seems to be exacerbated by such an approach. In that respect, Liminal Shroud share much with those post-rock acts that can paint intricate landscapes and stories with no words at all. The trio do have clearly defined vocals however, shared between guitarist Crossley and bassist, R. Taylor, with lyrics dealing with nature, mysticism and transformation. It is a heady world they weave, tied inextricably with their locale.

‘Tainted Soil’ is almost a contracted version of the opening track, a reprise. It once again opens with all the hallmarks of doom before it finally erupts in fury. There is less time for reverie in this song, with Liminal Shroud eschewing such pondering for later in the track-list, instead allowing themselves the first of many instances to show the power they can excerpt as a trio, moving in imploring crescendo to a thundersome finale. ‘To Forget’ is the first of the tracks to usher in the folk elements of the album, baring more than a passing reminiscence of their North American black metal brothers operating in the Cascadian region in the north west. The passages are executed well and persuasively, providing counterpoint to the fury previously unleashed, all the while reaffirming the connection of place and time Liminal Shroud clearly have with their surrounds.

‘The Grotto’ follows and reminds me somewhat of early Drudkh, not only in its approach to the genre, but also the recording style that some favour. I would argue Drudkh were hampered by circumstance, especially given how amazing their more recent LPs sound production-wise, and I can only assume this is the same for Liminal Shroud, rather than it being by choice. A better studio set up and an even greater, more effervescent mix and mastering job, and Liminal Shroud could no doubt produce a very fine album indeed. For now, we have Through the False Narrows that showcases promise and many moments of fantastic musicianship undercut by the aforementioned issues. ‘Erupting’ and ‘The Sentinel’ build towards the close, with the former being the shortest and to the point material on the record and feeling slightly out of place because of it. The latter is another impressive cut, showcasing what the band is capable of, albeit feeling like it may be treading some old ground covered elsewhere.

By the time we get to the closer ‘Lucidity’ my reservation in review was that the tracks I had enjoyed most on the record were those culled and reworked from their self-titled demo. Not a bad thing to reuse such quality material, but also not the most glowing report on forward momentum and the band’s progression. However, ‘Lucidity’ proves to undo much of that fear, as it is by far the best track on the album. It moves between all the elements the three-piece have exhibited thus far on Through the False Narrows, proving not only to showcase that they can meld all those separate influences and elements into one sound, but also delivering a strong, well-rounded conclusion. Melodic, at times fragile, yet also venomous and brooding in its heaviness, ‘Lucidity’ must surely sound massive live. It almost reaches that accolade on record but is dulled by the album’s overall hindrance.

Through the False Narrows is an exciting debut from a raw black metal band to watch, delivered on the much admired Hypnotic Dirge. I won’t labour the central issue with the record, but it is worth reflecting quite how much better the LP could and should sound. With those issues cast aside, I may be proclaiming this album to be one of the better black metal releases of the year, but instead I must only highlight it as a record to make sure you check out, in preparation for the trio’s next solemn offering.