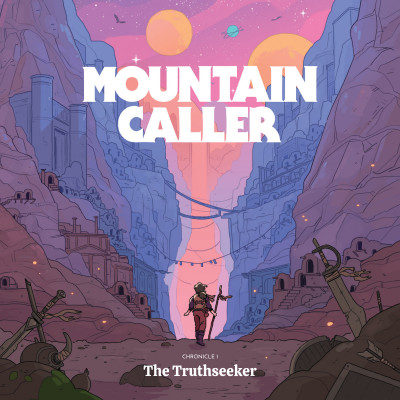 Post-rock, instrumental rock, or albums by artists without the need of a vocalist are not normally high on my interest list, except for a few exemptions – Mogwai, Explosions in the Sky, My Sleeping Karma. So, to take out London’s three-piece instrumentalists Mountain Caller is a risky one on my part. Why I have done so, is because this debut is released by one of my favourite record labels New Heavy Sounds who have never failed to deliver interestingly nuanced fuzzy based rock and metal.

Mountain Caller – who describe themselves as a heavy progressive instrumental three-piece – swing between guitar driven melodies, an enthusiastic partake in the swinging and throwing of the loud/quiet formula, and the occasional foray into heavier moments. But their progressive urges for surprising the listener makes Chronicles l: The Truthseeker, largely an engaging listen.

Opener ‘Journey Through the Twilight Desert’ forms delicate melodic guitar work which leads into various shifts between chilled dreaming soundscapes, a rude wide-awakening blast of double drum pummelling, via a more middle ground mid-tempo head-nodder. It sets the scene for expecting the unexpected. The excellent ‘Feast At Half-Light’ continues this approach but with a tougher robust rocking attack. Still containing tempo changes, drum fills, guitar riffs, but it remains steadfast to a rocking mid-tempo rhythm while guitarist Claire lets loose a Lee Ronaldo Sonic Youth infused drone towards the end which is quite possibly the album highlight. It’s an example of how a trio of musicians is all a band sometimes need.

The band’s seeming desire for not really wanting to stay in one musical place for too long is taken to an even wider reach with ‘I Remember Everything’. It like the journeying into the heart of a deeper erratic dream, which is where the middle section of the album feels like. While ‘Trial of Comfort’ is a thunderous doomy affair offset by a fine melodic section.

The only misstep is ‘Clamour of Limbs’, it’s the only one I am glad for the finish line, mainly because its progressive rock bordering on math rock’s twisted rhythms is too dense, so fails to get into any kind of flow and consequently is a frustrating listen. Too complicated for me to either rock out to or enable me to drift away along to it, despite its brief entry of vocals. It reminds me too much of the feeling of awakening from an anxiety dream for my liking.

Despite that little misstep, they end on a high with the excellent ‘Dreamspirals’. A fitting title to a great epic album closer as it first recalls Rush before it loosens itself from the Canadian legends shackles and travels into mesmerising unexpected places, evoking elements of the intricate earworm melodies of My Sleeping Karma along the way.

I’m not sure if Mountain Caller are as nuanced in what they do compared to some of their label colleagues, but when Chronicles I is good, it is bloody good and, on the whole, is an absorbing listen best experienced solitary using head phones. If you’re a fan of Pelican, and My Sleeping Karma, then Chronicles l: The Truthseeker is worth a listen. Just allow yourself to be guided through the many varying paths and mazes. It is, after all, about the journey not the destination.