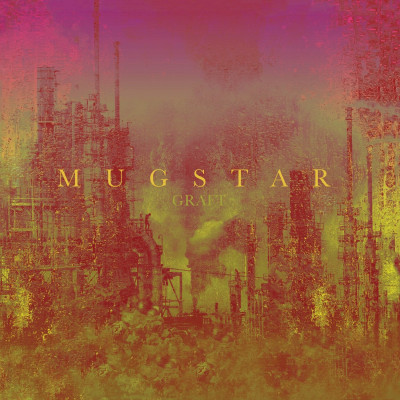 Mugstar are probably my favourite band from my native land: Liverpool. I don’t think I’ve ever covered an album by them so, I jumped on this straight away. To my none-scouse-speaking readers, the title of the album Graft may have less significance; the ubiquity of the word across Merseyside is emblematic of the area’s working class culture. To graft is to work as hard as you can, put the food on the table, pay for the rehearsal, grab them brass rings, make that paper. Work is freedom, ignorance is slavery et cetera. I suppose it could also refer to something else like a skin graft. though…

I’d say that Mugstar were one of the most important and influential bands in the revival of psychedelic music and the foundation of what is now usually referred to as psych music. Alongside Oneida and The Heads, Mugstar were arguably playing “psych music” before any of the bands that are arguably at the top of the scene now and have played a crucial role in establishing the tropes of this genre that make it possible for us to broadly discuss it. Take ‘Today is The Wrong Shape’, which is an absolute classic of psych music, as an example. It has all the hallmarks of the genre that people have come to imitate (mostly badly), that classic psych beat, the kind of post-krautrock guitar and the keys work that exists in the world of the collective imagination of Mugstar. At a time where personalities seemed to be overshadowing musicianship, psych bands like Mugstar and post-rock bands like Mogwai and MONO seemed to be reacting to these movements by focusing on the instrumental sections and the overall texture and atmosphere; eschewing ego-driven “woe is me” stories, post-rock and psych revival was focused on egodeath.

Oneida took this a step further by arranging themselves as such that there is no single front person and lead vocals are passed around with the casual good will of a spliff. The bands were trying to do something different and forge their own path and given that we now have endless submissions at Echoes And Dust from by-the-numbers Math, Post-Rock and Psych bands, I would say they were successful.

Imitation is the sincerest form of flattery. Although, sometimes hearing a band imitating Mugstar or The Heads can feel a bit like a doodle from a parent’s fridge hanging in an art gallery or a knock-off version of a well-known product (e.g Coco Pops replaced with Chocko Bangs). This sound oozed out of Mugstar and their contemporaries over a decade ago and yet, it still seems to be being used as a template for so many bands to try and grab their cool points playing in a psych band as if the genre hasn’t already mutated and grown into a totally different entity. It’s become identikit to people playing 70s psychedelic rock, where it’s suppose to seem cool, but instead just screams seedy white males with thick moustaches leering at school girls.

This kind of store-brand psych similarly to me just reeks of boring, beard-stroking music that goes nowhere slowly whilst people who are proficient at their instruments seem to stand on stage and hide behind their own technicality rather than wielding their instruments as unscrupulous tools of sonic self-excavation. There’s an absence of catharsis and release, it feels like false advertising. As a fan of the genres mentioned, I click play expecting something that shares a perspective and a resonance with the artists of the genre and instead I’m met with something alien, an imposter, a fake account of a dear friend and the only logical response to thousands of bands aping each other is to say: “fuck you”.

You could read this and say why can’t people just play generic music and my only response would be that you’re reading my review which represents my subjective opinion and preferences stated as fact. Enjoy what you want but, from my point of view, there’s really no need for any more generic math, post-rock, psych, shoegaze or any other music-by-the-numbers bullshit. Do something else, do something new. Be like Mugstar, be like Oneida, be like GNOD. Use your influence as a starting point and reinvent the wheel and keep reinventing ’til no one knows what the fuck you’re doing anymore. And if you’re reading this in the future after the impending Disco/Funk psyche boom (a few really good albums like this coming out soon), don’t jump on the bandwagon, let nature take it’s course. Tell your story, share your perspective, carve your name on the stone of the earth using every creative resource in your means to say “this is what it meant to be me whilst I was here” ‘cause this is your one and only chance and with the way things are going, soon we’ll all be smashing each other’s heads open and feasting on the gooey flesh inside for sustenance. It occurs to me, that I’ve yet to talk about the album itself because my attempt to contextualise this album became an unapologetic rant about my own issues with music so, without further adieu let me tell you what I think about Graft.

The real kick-off of the album, ’Zeta Potential’ is an instant winner for me, solid, thrashing beat and a simple yet effective riff form the bedrock of the track. The lead guitar work is nice enough and it has a really satisfying conclusion. ‘Ghost Of A Ghost’ and ‘Low, Slow Horizon’ are my picks for “songs I’m most likely to listen to while high as fuck” in the coming months, they’re both super slow and atmospheric. I do have a definite preference for the latter though, I feel as though the former lost my attention after a while. I dunno if people listen to Mugstar whilst sober a lot, I would recommend not being sober where possible in 2020.

‘Cato’ stands out as what will probably be the most popular song from this album, it’s very short, but the guitars have the same kind of frantic riffage of a The Fierce & The Dead banger such as ‘1991’. I love the contrast between ‘Ghost Of A Ghost’ and ‘Cato’, the structure of the album is great for dragging the listener in via extremes of timbre, structure and dynamics. The album is brought to an epic conclusion with an absolute shredder of a climax entitled ‘Star Cage’. I would say that it sounds like what I imagine Led Zeppelin’s ‘Whole Lotta Love’ would sound like if they were on acid, I was on acid and Robert Plant was charging into the forrest on a vision quest.

Final thoughts: the quandary with this album is that it’s nothing really different from what I’ve heard from Mugstar before, there is a large extent to which I feel like they should go further in re-inventing themselves. However, Mugstar just doing Mugstar is still really good and having pitted record versus gig with the band, I can definitely say this album will be awesome live. There’s some really great playing on this album and taking it for what it is, it’s still gonna be a great album to whack on while passing a joint around.