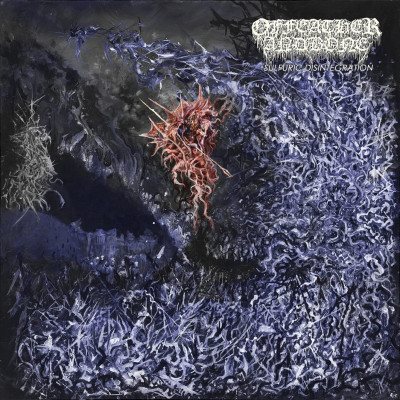 Sulfuric Disintegration by Of Feather and Bone

The third album from Of Feather and Bone is a frightening, warped spectacle. Using their previous effort and breakout moment, 2018’s Bestial Hymns of Perversion, as a lose foundation and framework the trio use Sulfuric Disintegration to perfect, pervert and punish. The band keep their offering extremely lean, too, with only six tracks combining to contribute to this LP, which comes in at little over half an hour. It is, however, the perfect running time for such a maelstrom of heaviness. Any heavier and we would surely become so dense as to sink straight to Hell, sans, y’know, death…

As alluded to, the band’s previous record was a defining moment in their life so far as an act. Prior to that, an album (Embrace the Wretched Flesh), two EPs (False Healer and Adorned in Decay) and a split (with Reproacher) has signposted them as a band high on technical merit, luxuriant in their musicianship, but lacking a clear defining edge. Mixing grindcore with a crusty hardcore, their sound was powerful and deliciously bludgeoning, but seemed to be missing a true creative spark, or indeed some easily identifiable passion behind the playing. All that changed with Bestial Hymns of Perversion.

Moving to famed extreme metal label Profound Lore (who are also responsible for this release), the trio mostly deviated away from the hardcore and crust punk influences they had introduced themselves with. In their place was an extremely brutal brand of death metal, now interacting and poisoning the veins of their already established and much loved penchant for grindcore. In this musical corruption, the band found their sound and horror was unleashed.

Sulfuric Disintegration builds upon the structure now established and respected throughout the scene. The band members attack this record in a way that genuinely took my breath away on the first listen – and now makes me shake my head in wonder upon repeated spins. It is nigh-on deranged in the focus and strength that this record exudes from every angle one approaches it.

As well as the writing and performances it is worth noting those the band have surrounded themselves with to record such a feat. Recorded at Juggernaut Audio by Ben Romsdahl and produced, mixed and mastered by Arthur Rizk, Sulfuric Disintegration has the same people behind it as the most recent Primitive Man album Immersion, as well as albums from the likes of Xibalba, Cro-Mags and Pissgrave. It sounds utterly and uniquely toxic. The presentation of this record is topped off by some pretty mesmerising artwork from Stewart Cole, who has previously done work for Bastard Grave and Noisem.

The opening salvo of ‘Regurgitated Communion’ and ‘Entropic Self Immolation’ is a punitive ten minutes. Here the band focus on the dark, twisted fury of the best of death metal (think prime Devourment going for the jugular), all the while not digressing from the structure their riffs command and not deviating into too many other ideas. In such a maelstrom of heaviness many bands can and do get sucked into throwing the proverbial kitchen sink at a track, forgetting that in so doing they may very undermine the punch the song was originally intended to provide. In that way Of Feather and Bone also rely on the craft of bands they don’t immediately actually sound akin to, such as classic Immolation and Bolt Thrower.

There would be nothing wrong whatsoever with another four tracks in this vein, but the trio intriguingly change things up on the third track of the LP, ‘Noctemnania’. Here, the band incorporate an element my ear hasn’t heard in their oeuvre to date – that of a desire to explore death metal inflected (or should that be infected?) by doom. No, the track doesn’t suddenly transpire to become a double digit epic, but it does expand to be the longest track on the record, almost hitting the six minute mark. ‘Noctemnania’ melds sounds that are reminiscent of Outer Heaven or perhaps Dead Congregation would be an even closer parallel. It’s accomplished and proves a true moment of variation on a record that, for the most part, goes hell for leather, unable and unwilling to reflect or falter in its vainglorious pursuit of absolute terror.

‘Consecrated and Consumed’ returns us to this aural destruction, effortlessly transitioning back to the unstoppable juggernaut we had already been introduced to and become accustomed to travel in the wake of. It’s yet another track that wields enough brute strength that one may wish to hold one’s neck when listening to it, just in case it somehow manages to break it for you. ‘Sulfuric Sodomy (Disintegration of Christ’ is interesting in that it lends the album the lexicon for its title yet is possibly the most basic and least impressive track on offer. It still lashes the listener with bile and thunderous riffs, pummelling bass and furious drumming, but also seems like the track that is actually a little short of ideas and direction. Standing alone it is a powerful, throbbing, cutting track, but alongside its sulfuric brethren it comes up somewhat lacking, overshadowed by their power.

Thankfully, following a brief sombre segue, the album continues and closes with the delightfully titled ‘Baptized in Boiling Phlegm’. It’s furious and unimaginably caustic – a riveting listen that brings about the conclusion of Sulfuric Disintegration with devastating effect.

Of Feather and Bone’s third album – and second since their reinvention – is a captivating record, showcasing a band at the top of their game. Old school razor sharp death metal meets the more modern flourish of the genre, as well as the scrambling, hallucinatory implementation of grindcore. And, for good measure, the band have never completely left their hardcore, metal and punk roots completely in the dust – they always know when to introduce a riff or towering drums to get the head inexorably nodding. Thirty minutes of disgusting near perfect bludgeoning of curdled remains. Yum.