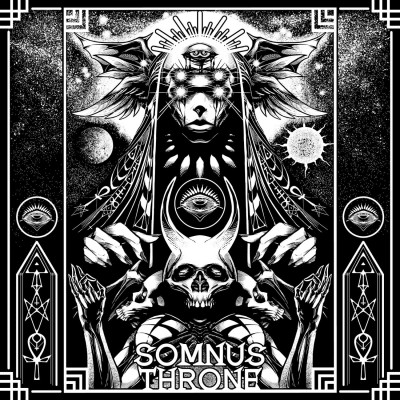 Somnus Throne opens with a sample from what sounds like a 70s occult B movie, 20 seconds that allows the band each to take one last deep toke, exhale, close their eyes and …. boom, the thundering riff of ‘Sadomancer’ crashes home. All hail the riff.

This is the debut album of Somnus Throne, who are spread out across four US states, and they play stoner-infused psychedelic doom metal of the kind made holy by many bands, but which all lead back to one. But it’s not all about Sabbath worship, and it’s not derivative. There’s plenty to love, and plenty to hear afresh. It’s gloriously heavy. An album to be played loud.

‘Sadomancer’ is a perfect opener on this four-song debut. It isn’t short, though: each track is over 10 minutes, giving the music space and time to develop. ‘Sadomancer’ starts with a haunting melody that fits the 70s horror vibe perfectly, shortly before breaking into the heaviest thing I’ve heard for a while. It’s slow, it’s thunderous, it channels the spirit of Electric Wizard and Italian doomsters Ufomammut, and it crushes. It makes you nod your head. All hail the riff.

From here on things start to get interesting. Some bands would have pumped out four times ‘Sadomancer’ and finished the album. Instead, Somnus Throne give us ‘Shadow Heathen’, which starts with a fuzzed-up, distorted bass riff that Lemmy would have been very proud of. The track switches between a faster-paced chorus with the most tremendous hook, an earworm you won’t be rid of in a hurry, and much longer, hazy, woozy passages of much slower doom riffing. There’s time for some almost bluesy soloing too, and the rhythm section slows down to a crawl to give it space. All hail the riff.

‘Receptor Antagonist’ trips along with a ponderous heavy melody that keeps the interest with some catchy turnarounds. The vocals kick up a gear in this track, too. Up to now they’ve been pretty low in the mix and not very noticeable but on this third track, as passages of the song change, they switch between a far-off chanting and a much keener growl (akin to Mastodon’s Brent Hinds) that suits the faster sections.

Final track ‘Aetheronaut/Permadose’ starts with an acoustic melody that soon develops into the Somnus Throne signature riffing, again with more intense vocals that sound almost like Mastodon’s other lead vocalist. I’d like to hear more of this more upfront vocal style on future albums. This track develops over the space of almost 15 minutes, and not a minute of that is wasted.

Somnus Throne takes a few listens to get to know. The intricacies of each song can be missed on early listens. The vocals low in the mix grated on me a little at first, but their nuances and variations become clearer with time, and they change on later tracks. The heaviness, the celebration of doom metal and the 70s-tinged occult B movie are unmistakable and are put across with singular intent. What Somnus Throne also give on their debut outing is a hint that they can develop their sound, within each song and across the album, and hopefully on later material too. The riff is king. Play it loud, very loud. All hail the riff.