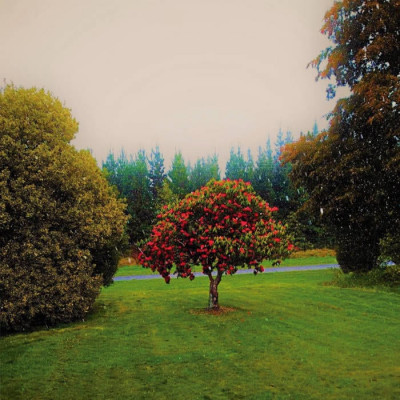 Foothills by The Bats

The Bats are a NZ institution, not only recording for most of their careers on the venerable Flying Nun Records, but also maintaining the same 4 person lineup since their inception in 1982. This is only their 10th studio album in all that time, and they haven’t missed a step or lost one iota of quality in their work. The album was written wholly by guitarist/vocalist Robert Scott (also in The Clean with the two Kilgour brothers) and was recorded at a country studio in the Southern Alps in Aotearoa. One cannot imagine a more spectacular landscape for creating sonic art, and the time taken shines in the consistently excellent tunes that abound on this record.

‘Trade In Silence’ ushers you in with warm, effortless jangle pop. Robert Scott is an endearing lyricist, and like the most comfortable shoes you can wear, he takes us through this wonderful song in the best possible fashion. You can expect an indelible hook at its center too. I do wonder how Robert pulls off these songs, perfectly executed and performed. He has always had this knack, in whatever project he is involved with.

‘Warwick’ is the first single, and you’ll immediately guess why. It’s an instant earworm! It hearkens back to the band’s older material, and the guitar interplay is stellar! ‘Beneath the Visor’ is a sweet slice of NZ summer. ‘Scrolling’ is pensive folk rock with lovely lead guitar fills from Kaye Woodward. ‘Another Door’ is yet another early single that enticed listeners like me who could barely wait for this album’s release. I do love the musical arrangement on this one, and this is definitely one of the highlights on this collection. ‘Red Car’ is slow and sublime, with warm keyboard washes and pretty harmonies.

‘Field of Vision’ moves along smartly, with fine bass work from Paul Kean anchoring this bouncy tune in place. ‘Change Is All’ reminds me somewhat of NJ stalwarts, Yo La Tengo, something I often think when I listen to how easy they make it seem. ‘As You Were’ is melancholy folk pop, and man, is it ever gorgeous! ‘Smaller Pieces’ is sprightly and has an attractive cadence that draws me right in. ‘Gone to Ground’ is another of the band’s singles, and I love its moodiness. The last tune ‘Electric Sea View’ is a fine one to end this song suite, as it’s a complete sonic portrait of everything that is great about this band.

The entire album was lovingly recorded and crafted, and the love these guys have for what they do as a group is patently obvious. Highly recommended for all jangle and strum fans, as well as anyone who follows the fertile Flying Nun label.