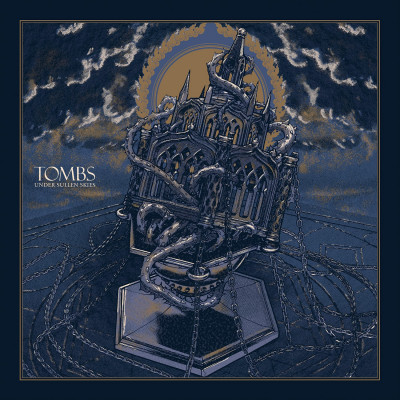 Under Sullen Skies by Tombs

Tombs are a band that have held my attention from their inception to this day. Their 2009 debut Winter Hours is an unbridled masterpiece, as are the two albums that followed in its wake, frankly: Path of Totality (2011) and Savage Gold (2014). EPs and splits during that fertile few years only proved to further their mythos. A metal juggernaut had landed and could justifiably claim supremacy within the scene. Not many could argue against it, given the strength and speed of their output.

All of the aforementioned albums were delivered via Relapse Records but following Savage Gold the band sought to take back their independence. The band was also morphing beyond its original blueprint, so perhaps it made sense for a change. As well as this, Tombs had already started to see a revolving door when it came to their line-up, with Mike Hill (guitars, vocals) being the one constant that provided Tombs’ resilient backbone.

Tombs reappeared, perhaps surprisingly to some – but not to those who had witnessed their crossover potential – signed to Metal Blade. One album resulted from that union: The Grand Annihilation (2017). An extremely admirable record though it was, it did sound a lot different and also rather single-minded, so it has come as no surprise to read that Mike has commented recently that it could very well have been a solo record, rather than one under the Tombs moniker. The LP is still a fine inclusion in an almost peerless discography to date but did raise the question of whether the other members would co-write in the future, and – more interestingly – where Tombs were headed in the future.

Since those early days, those times hearing teasers for Winter Hours over a decade ago, I was always stuck by a particular cognitive dissonance for me as a listener – and especially a listener who actively seeks out reviews, interviews and coverage of music in general. So many, including the band themselves, insisted on dubbing themselves as black metal. Tombs, to me, are a melting pot for audio alchemy, and that certainly very much includes the DNA of black metal, but they are, in my opinion, ostensibly a metallic hardcore band. Interwoven into their timbre and that aural landscape are black metal, as previously acknowledged, but also diverse elements from punk, crust, classic metal, post-metal abrasive doom and even dark Americana, and an outlaw country vibe. Everything may be draped in a mourning veil, covers in a blackened ash, but underneath it all, Tombs are a band writing songs that absolutely rip, have riffs that are repeated often enough to recognise and headbang to, and usually are of a digestible running length.

Where am I going with this introduction? Firstly, Under Sullen Skies sees the band on a new record label in Season of Mist (albeit their second release on SoM, given they released the excellent EP Monarchy of Shadows earlier this year). Secondly, the other members of the band have contributed and collaborated with Hill when writing this new album – and it shows, both for good and for bad. As well as this, although Tombs have been no stranger to guests on their records from time to time, Under Sullen Skies is littered with friends adding to their new record; Dwid Hellion of Integrity, Sera Timms of Ides of Gemini and Black Math Horsemen, Andy Thomas of Black Crown Initiate as well as other appearances from those in Black Anvil, Psycroptic, Six Feet Under and Cat Cabral, and actor friend lending her voice to a spoken word section in penultimate song ‘Angel of Darkness’. Lastly, those who had always recognised Tombs as black metal will surely feel somewhat exonerated, as Tombs’ latest more obviously leaning into it than ever before. However, despite the record being drenched in the style, there is so much more going on here, and there are such different foundations clearly providing the structure and inspiration behind the dozen tracks, that it still makes no sense to me in using black metal as a jumping off point.

So, where do we start?

Under Sullen Skies has a kinship to its preceding 2020 release, the EP Monarchy of Shadows, but less so than many might have imagined. In tone, the records are aligned, but the full-length album features a track-list of twelve songs that, by and large, are far more focused than those on the extended play, and who also sport many more hooks and moments of catchiness. The record opens with ‘Bone Furnace’ that rattles out of the gates and makes me think of the Swedish school of death metal more than its extreme metal ‘cousin’. It’s a track that lands every blow on the listener’s beleaguered head and continues Tombs’ and Mike Hill’s uncanny ability to open up albums incredibly powerfully.

‘Void Constellation’ is immediately different, with a metal chug that in a different universe where they remained relevant could have appeared on a Metallica album [always like to court or rather bait some controversy every now and then…]. It would have perhaps been easier to refer to Slayer here, but there’s something about the monstrous way the chugging behemoth of a riff is mixed that makes me turn to the bombast Hetfield and co. loved to throw into the thrash. It’s always interesting (foolhardy?) when a band or record label [the former is true in this example] actually deems to highlight a track from an album submitted for review as the best. Third track and lead single from Under Sullen Skies, ‘Barren’ is that track deemed to be superlative and, err, it’s not. Indeed, ‘Barren’ might be one of the least remarkable cuts on the record and with perhaps one more track could have been actually cut to make the LP hit that little harder. More of that later…

‘Barren’ in no way derails the album, but ‘The Hunger’ nonetheless sets it back on course, with some of the hookiest moments on the entire album, with a chorus sung by Dwid doing his best to try to convince us all that he may be a lot older and have been a founding member of Motörhead. He does it very well indeed, as this chorus sticks in the head, and that very head is banging righteously along with it. ‘Secrets of the Black Sun’ follows and is even better, with Tombs finally breaching into a genre they have long threatened to and we all knew they were perfect for: death rock. It’s a dark and all consuming, with Sera Timms providing her patented ethereal, beautiful but deeply unsettling vocals to the track, before it degrades into some deeply sullen doom. Goosebumps, people. Perhaps the standout track on this album and certainly one to consider for ‘best of show’ in Tombs’ recorded history.

The dissonant ‘Descensum’ shocks and prowls its way out of the speakers, bringing the pacing of the record back up to that which we expect from Tombs. Dreams of reverie and reflection are banished by this track that goes for the jugular, finds it and begins to tear. ‘We Move Like Phantoms’ is not only a kick-ass name for a track, but also kicks considerable ass in its own right despite its short sub two-minute length, with more doom-inspired riffing but that settle into far more of a groove than those that have gone before. The track, with its short runtime acts as a transition to ‘Mordum’, a song that is probably the only track on Under Sullen Skies that could potentially be translaplated into other (earlier) Tombs releases. With its crunching hardcore strut, it is by no means a poor track, but along with ‘Barren’ I would have been happy to hear it as a side to a split 7 inch, or something like that.

‘Lex Talionis’ also features a hardcore stomp and does, on its own, the job that ‘Mordum’ and it seems to have been expected to serve. It’s not a particular highlight, but whips by in typical Tombs fashion, retaining the momentum already built up. ‘Sombre Ruin’ amps up the fever pitch all the more, delivering a crushing, furious moment on the record before the band deliver the two long closing tracks, ‘Angel of Darkness’ and ‘Plague Years’. The former is a somewhat restrained, simmering just below boiling seven minutes, that features Cabral deliver her stark spoken word. It may be an obvious change of pace before the grand finale, but the quartet pull this well-worn trick off with devastating aplomb. It’s a deeply impressive moment on the record before ‘Plague Years’ sums up our collective 2020 and hammers it into smithereens. It thrashes and gnashes for another seven minutes, drowning any doubters of Tombs in its beckoning, magisterial metal power. It closes Under Sullen Skies in triumphant, bludgeoning form.

Tombs have delivered another fine album. The record could – and I think should – be a little more concise and at times the juxtaposition of tracks can prove to be somewhat disturbing, or rather, distracting. The band have always pulled this chameleonic track-list approach off superbly well, but the cogs of the machine are perhaps just a little more exposed on Under Sullen Skies than on previous efforts. Those niggles aside – and they really are nit-picking reviewing, I admit – Tombs have produced another devastating, high quality release to add to their already impressive discography. It features killer artwork, and I should mention that the record sounds absolutely massive in its production, too.  Hats off to Valnoir and Bobby Torres, respectively. The band continue their constant and considerable evolution, but despite it all, genre debates and line-up changes aside, this record still sounds resolutely like Tombs. Only the best bands can do that. 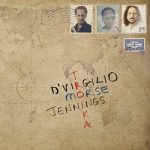