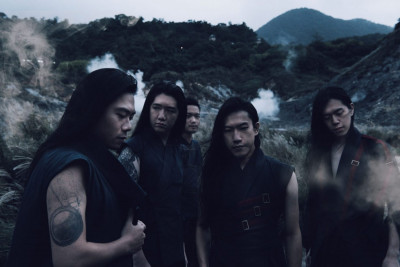 It’s actually kind of sad, as when rock n’ roll, metal, or the freedom movement were at their peak back in the 70s or 80s, Taiwan was actually under martial law, so that inhibited our cultural development by a lot. In order to have Taiwan be known in the global artistic field, Taiwanese bands would really have to catch up, and also we really have to have some political views to get rid of the old, outdated way of thinking.

Taiwan is a strange country to most in the west, yet it has brought forth some fascinating metal groups. The small island state is also known as the Republic of China and Chinese Taipei. Its history and identity is complex, but bands like Bloody Tyrant take up the deep, cultural roots that dwell there.

Bloody Tyrant (暴君) has been around for 11 years and has released 5 full-length albums to this date. One of their topics is the Sun Moon Lake, where the band originates from and which inspires them to share the native stories of the island. The band was kind enough during this time to answer my questions and tell a bit more about metal in Taiwan and their latest album, Myths of the Islands.

Lords of the Isles: Bloody Tyrant

E&D: How is Bloody Tyrant doing?

E&D: Has the band suffered from the COVID-19 outbreak much? How has it hindered your efforts as a band?

A lot of shows were canceled, but we’re glad that Taiwan is doing a good job at handling the pandemic, and we’re getting more and more shows back on.

E&D: Please, tell me something about your background and how you got into metal music. I understand some of you also have different projects.

Most of us started with school activities back in the days, and started listening to heavier and heavier music, then started to get our own bands going.

E&D: Can you tell me something about the formation of Bloody Tyrant and how the band has evolved?

In the beginning, Bloody Tyrant was an extreme black metal band. But as time moves forward, and tastes and creative directions change, we are now more of a folk metal band.

E&D: Taiwan has a fairly lively heavy alternative music scene and a lot of bands merge folk with black metal, like yourselves. What made you choose to blend these styles and create a distinctive and unique sound for yourselves?

E&D: What is the reason to make your country’s mythology part of your theme? How important is it that your music reflects something of your heritage?

E&D: On Metal Archives, special reference is made to Sun Moon Lake. Can you tell me more about why it is so significant and an important topic in your music?

Sun Moon Lake is located in the only county in Taiwan that’s almost next to the sea – Nantou, and that’s also where Bloody Tyrant started. So to have mythologies about Sun Moon Lake as our theme was a way to be connected to our land.

E&D: In the middle of this pandemic, you have released a new album, titled Myths of the Islands. What can you tell me about the recording and writing process of this record?

Actually, we started to work on this album back in 2018, where we started to look for those mythologies about the aboriginals. And just like the two previous albums, we tracked and mixed the album in 2019.

E&D: What story can listeners learn by listening to this album? Most songs you’ve shared are introduced as stories from your land. Can you provide a small introduction to these stories?

The stories from the album are all from the Taiwanese aboriginal mythologies, and just like many other cultures of religions, there are mythologies about the genesis, the flood, shooting the sun, and plague and that kind of story. Some of those mythologies are related to their rituals, totems, and such.

E&D: How has the reception of this record been this far?

Although the style is very different from our previous albums, for the folk metal fans they have been enjoying the album, and for some people who are into the Taiwanese aboriginal cultures, they are also happy to see a Taiwanese metal band promoting such stories.

E&D: What’s happening right now in Taiwan’s metal scene? What bands should people really check out today and what interesting things are happening?

E&D: As an island nation, do you connect to scenes from neighbouring countries?

Although we use the instrument that is commonly seen as a Chinese instrument – Pipa, a lot, and indeed the instrument was imported into China way back in the days and became populated by China, but this kind of instrument also got into Japan, Korea, Vietnam, Ryukyu, etc and they each became their own, so we just call it an oriental instrument.

Taiwan was ruled by Japan for a period of time, so not only the domestic development was influenced by the Japanese, but also culturally, even until this day, and that’s why we had the album HAGAKURE.

E&D: Politics are often involved when bands talk about their origins, history, and legends. Being a band from Taiwan, is that a part of what focus on as a band, especially today?

It’s actually kind of sad, as when rock n’ roll, metal, or the freedom movement were at their peak back in the 70s or 80s, Taiwan was actually under martial law, so that inhibited our cultural development by a lot. In order to have Taiwan be known in the global artistic field, Taiwanese bands would really have to catch up, and also we really have to have some political views to get rid of the old, outdated way of thinking.

Also, politics is about people, it influences how we live our lives, everything is connected to politics, every culture, every language, and every story is a byproduct of politics.

E&D: What future plans do you currently have and do you plan to tour Europe again?

We will be going into the promotion phase for our new album. We will definitely be planning to go back to Europe after the pandemic, as we received really good feedback from our European tour this year.

E&D: If Bloody Tyrant was a dish, a type of food, what would it be and why?