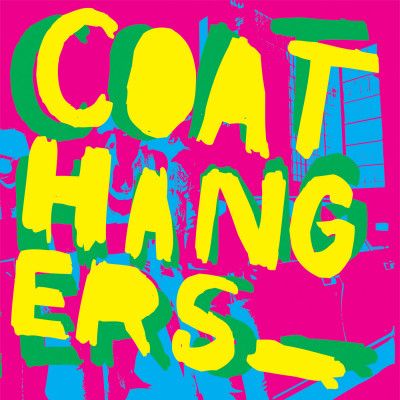 S/T by The Coathangers

OK, so until just now The Coathangers had somehow passed me right by. Maybe they never even blipped across my radar. More likely I saw the name and nodded. It’s fine but not that memorable, a mildly snotty punk rock name, ideally suited to a band of angry young women. Maybe I thought I’d probably like them if they were right there in my face playing on a bill with other bands I came to see, but I also didn’t care all that much. Sometimes your brain autopilots you on stuff like this if you aren’t paying attention and then you have to go back and maybe feel a bit stupid.

You see the thing is, The Coathangers play scrappy girl group garage punk with chaotic guitars and a gooey pop centre and well, of all the things I love in music, this is one of the ones I love most unreservedly. If you’re in the same boat as me the good news is we get to start in at the very beginning with this new remaster of their 2007 self titled debut. If you’re a long time fan I guess you get to see how it all started, this being the one record from before they joined long time label Suicide Squeeze and, I assume, in short supply until this reissue. It’s deluxe, don’t you know.

A mocking selection from a self help album introduces some raw edged guitar that’s getting motivated by the magic of handclaps. As if that wasn’t enough already it’s joined by a wonderfully cheap and wayward keyboard part, the song is about Tonya Harding and at the end it drops out into a layered vocal chant. It’s a little gem. Next up ‘Wreckless Boy’ combines a really odd rhythm thing with a needly ‘my first guitar’ line and manic edged vocals. So sure, my initial unconscious assessment wasn’t all that far off the mark, The Coathangers are sort of what I expected them to be, a post riot grrrl punk mess. They have a song called ‘Shut The Fuck Up’ that starts with thumping floor toms and has a nice call and response between the guitar and keyboard before the vocal tears several strips off some unfortunate inadequate. I just forgot how much I tend to enjoy that sort of thing.

The band formed to play a house party at Hallowe’en 2006. That went well enough they carried on getting gigs and wound up recording this album in one night the following year. Even then they didn’t really expect that anyone outside their friends in Atlanta would hear it and so it captures the band in a carefree mood. The real lack of consideration of any audience help make it a very pure thing, open ended and unselfconscious. They swap instruments and throw whatever they can into the mix to see what happens. Like the keyboards making demented phone noises throughout fierce screaming meltdown ‘Don’t Touch My Shit!’

The Coathangers is not quite the spontaneous explosion of untutored noise and shrieking you might expect from its origin story. They have a strong sense of structure and dynamics that some punk bands never master. A lot of them could do with a bit less structure, mostly because they just learn the one and stick with it but even on these early efforts The Coathangers keep the songs loose and let them do different things. Not everything is wound up and screaming in the red. ‘Buckhead Betty’ has softly strummed, perfectly-imperfect guitar, more handclaps and ends in applause. You probably don’t need to know Buckhead is the swanky bit of north Atlanta to get its acid message.

Towards the end they tire of raging and the wonkier stuff comes out. What sounds like an accordion but is probably a melodica wheezes through ‘The Missing Letter’ which is also part sung in Russian because why not? ‘Bloody Shirt’ might be my favourite tune on the whole record. A lovelorn lo-fi indie thing on piano accompanied by shakers and xylophone. There’s a kind of school music room oddness about it that’s slowly overtaken by its vulnerability as the backing vocals underscore the lyric “I wear my heart on my sleeve, and everyone sees, sees the mess you made of me”.

Turns out The Coathangers are more than just what I expected them to be. A quick listen to last year’s The Devil You Know shows they’ve grown and developed as a band, but not too much. So, there’s a whole back catalogue for me to dig into now. This first record is adorable and hilarious and noisy and just crackles with wild youthful energy. Which is what rock ‘n’ roll is supposed to be for, right?