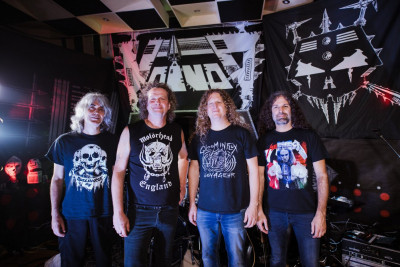 I mean what keeps me going in Voivod is the travels and meeting my old friends and new friends and playing and performing music all around the globe.

Voivod have just release their live album Lost Machine and in lieu of any live shows in the foreseeable future, it’s a great excuse to indulge with the band in their element in the live arena. Gavin Brown caught up with Voivod drummer Away to talk about the live album as well as the band’s follow up to their last album The Wake and the reaction to that album, the status of the Voivod film, the influence of punk and hardcore on Away as a drummer and on Voivod, legendary tours, and his vast array of artwork which will once again be the subject of a forthcoming book.

E&D: Voivod’s new album Lost Machine: Live is out now. What can you tell us about the live record and how the gig it was recorded at went?

Away: Well, last year we were touring a lot for the album The Wake and we played a bunch of festivals around the world. Two of them were in in the province of Quebec where we’re from in Canada, so we took the opportunity to ask Francis who works with us on the studio albums these days. We asked him to come with his mobile gear to document the two shows. At first the main idea was to supply material for a Voivod movie being made, but early this year when the lockdown happened, we started to look at projects we had in the bank that we could wrap up, so one of them turned into the The End Of Dormancy from the Montreal jazz festival last year and the other one is a full show from the Quebec City Summer Fest of last year. We knew last year when we came out of the Quebec City show that the gig was really tight and the energy was amazing. It was the the last stretch of a long series of shows before a small break until we went back on the road. At this point the bands chemistry was amazing so we knew this could result in a full length live LP. When we listened to the tracks we were really pleased with the performance.

E&D: With the gig being in Quebec, did it make it special that it was a hometown gig for the band?

Away: Yes, both the Montreal and Quebec city shows were very special because the album, The Wake was enjoying a lot of success. We had won a Juno award in Canada for the album and there was a very good momentum and a good buzz around us. Of course it’s always a bit more stressful to play in front of families and friends than anywhere, but the atmosphere was just amazing.

E&D: When you were doing the live album and mixing it and listening to the album and watching the live footage again, did it make you long to play live again even more?

Away: Oh, yeah, for sure. I mean what keeps me going in Voivod is the travels and meeting my old friends and new friends and playing and performing music all around the globe, it’s just amazing and that’s why I’ve been in the band for 27 years now. Of course, we did give a shot at doing an online show and it went really well, so we’re going to be doing more of that. Just the fact that we were able to get together and rehearse was amazing. Of course we have to do it in a studio downtown here in Montreal with protocols and all that, but again, just the fact that we got together to play music was amazing. We’re gonna look into doing maybe specific albums online maybe early next year. We really, really miss going on the road. We had a world tour planned this year and it’s been postponed to who knows when, so we just can’t wait, but in the meantime, early this year, we had done some templates for new material and we are working on that right now.

E&D: When are you looking to record the follow up to The Wake?

Away: I would say that if we if we are disciplined and are able to supply the material at the end of next spring, it will be out by the end of next year. We’re aiming for that. At this point, right now we are building the material while socially distancing because like pretty much everywhere else, we’re experiencing a second wave in Canada, the lockdown is back in effect, but we all synced up on logic pro sharing a Dropbox folder and we are moving along with the new album with the new technology which is really great.

E&D: The movie that you mentioned earlier there’s still plans to release that, at some point next year?

Away: Yes. the movie is done by Felipe Belalcazar, who is doing our videos for the live album and there’s a lot of it done already, but I think the last interviews that were supposed to be done were with Snake and I and then we had enough material, but the pandemic really put a stop to it. So Felipe, along with doing the videos, he’s still working on the movie and we’re really hoping to be able to release it next year as well.

E&D: You released the End Of Dormancy EP earlier in the year, too. How has that been received and where did the idea to do the extended metal section version with the brass on the title track come from?

Away: It’s been really well received to the point that people are asking for more, but I know it’s a lot of work for Chewy who writes the score for everybody involved and same with the string quartet that came in the studio for The Wake so it’s a lot of work for him, but when we were invited to play the Montreal Jazz Fest last year, it’s really a huge honor and a prestigious festival so we were looking for something special to add to the show and Chewy came up with the idea of adding some brass and I was coming to that immediately because of the work he had done with the string quartet on the album. I mean, I thought it was going to be amazing, but when we first jammed with quintet before the show I was really pleasantly surprised because to me it sounded like a band that I love called Magma, so I was totally blown away by it.

Away: Oh, it’s been a huge influence ever since the the Pistols, the Damned and the Stranglers. Shortly after that post-punk with Killing Joke and Bauhaus and then I also really got into anarchist punk and hardcore like Conflict, Discharge, Broken Bones and Crass and also the Dead Kennedys, so it’s been influencing my style a lot in the sense that most of the drummers in these bands used a lot of tom beats, which makes the music very tribal so I integrated that tribal part in my style immediately when I discovered punk in the seventies.

Away: It was mainly a combination of everybody involved. I mean, Snake and I were really into punk and hardcore but Piggy was a lot more into progressive rock and Krautrock, of course we were all into new wave of British heavy metal and the early years of thrash metal so it’s pretty much a mixture of all that.

E&D: Did it inspire you to have punk and hardcore and even hip hop groups cite Voivod as an influence and inspiration along with all the thrash and metal fans?

Away: Oh yeah, It’s always been amazing with Voivod how people from different scenes came to the shows so the crowd was a mixture of all kinds of alternative scenes in a way. On my hand, I was asked to do art for bands that are not metal at all for t-shirts or album covers and whatnot so it’s been it’s been a plus for Voivod to have like people from Sonic Youth or Dave Grohl praising Voivod.

E&D: Your artwork has long been a part of Voivod, does making art still make you happy and inspire you as much as making music?

Away: It’s very important for me when I’m not playing drums to do some art. On the road I draw in every city. I draw my impression of the city the day after the show and at home, I draw all the time and it really takes the pressure off. I mean, drumming and drawing from the sort of stressful sci-fi world we are living in, so right now I really miss playing drums but I’m lucky that I can do art at home for Voivod and for other bands and for myself. mean, you know with what’s going on right now, where people are asked to stay home I’m lucky that I can work at home.

E&D: Have you got any plans at all to release another book of your art following the Worlds Away book?

Away: Yes, I’m actually putting the final touch at an online store right now, it should be online any day and Aria already printed like a comic book basically and that that’s going to be the first one available with my new website and I’m also scanning all the road art I did for the past few years for an upcoming publication as well so it’s pretty much going to pick up where Worlds Away left around 2008.

E&D: What have been some of the most memorable moments in your time with Voivod so far?

Away: Oh, I think that there were quite a few. the first US tour in 86 with Celtic Frost and the first Euro tour in 86 with Possessed, these were really eventful tours where thrash metal was exploding, so it was very exciting. I think in 1990, when we taught for the album Nothingface, we did a long North American tour with Soundgarden and Faith No More, and we also did a Canadian tour with Rush, so that year was a highlight as well. I would have to also mention when we did the 2003 Ozzfest when Jason Newsted was part of Voivod, it was a very long stretch as well, and an amazing experience. At this one Jason was playing with Voivod and Ozzy so it was a lot of work for him that summer! Also the new album The Wake, the reception it has got is also a highlight in my career.

Away: Thanks for having me and hopefully we’ll see you on the road.

E&D: Yeah. Hopefully, the last time I saw you in the UK was with Carcass, Napalm Death and Obituary!