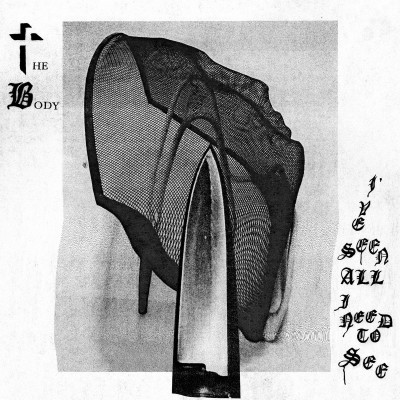 I've Seen All I Need To See by The Body

I fucking love The Body. Their albums whether collaborative or insular are all awesome, they’re absolutely relentless as a live force and having met the duo, they are super lovely people. In fact, The Body is also probably the biggest or most full sounding two-piece I’ve ever heard and having heard a lot of them lately; they almost always seem to be lacking in sonic depth. From a cursory listen, it seems like I’ve Seen All I Need To See is a departure from the band’s collaborative explorations and without giving anything away, it seems like it’s helped them find a solid footing to move forward not that they weren’t already one of my favourite bands in the world…

The album begins with ‘A Lament’, which is both aptly named and the first single from the album, so some readers may be familiar with that already and if not, I’ll embed it here somewhere… The opening sample builds an ominous atmosphere almost Edgar Allen Poe-esque in its foreboding. The drums beat slowly like a funeral dirge. The noise drowns the vocals. The vocals glitch in and out, honestly, I had to listen back and forth three times to be sure. After a lengthy break, I decided to revisit the album with knowledge and I found that introductory effect a lot more palatable and enjoyable. The classic Chip King vocals kick in with what sounds like bit-crushed fireworks exploding, perhaps that’s just my serotonin. The apex of the song is the dam bursting open and liberating the music and screaming from it’s lo-fi bastille into the glorious technicolour of melody and rhythm. The guitars are keys carrying some of the most triumphantly melodic sounds I’ve ever heard from The Body and it almost feels like the group coming unchained after years. There’s something really amazing and arc-like about it. As a long-time fan, it simultaneously feels like an epic conclusion and an awesome new beginning.

‘Tied Up and Locked In’ certainly has a debatable title, do I read that as a bad thing or a good thing? Is it kinky or criminal? In any case, the production is amazing. Lee Buford’s drums sound like rolling fire and thunder, whilst Chip’s like a modem having a nervous breakdown. The balance of the track is phenomenal. It’s incomprehensibly brilliant. I really love the pacing of ‘Eschatological Imperative’, the track breaks down to the slowest, monolithic swing of a sledgehammer and then erupts into an apocalyptic hail of drums and screams and noise. It’s absolutely brutal. ‘A Pain of Knowing’ is a classic kind of album threader track from The Body, if you’re familiar with their work, you’ll have heard similar noisy, slow-burning offerings from them that serve as an interlude to maintain the dread between two wildly different songs. ‘The City is Shelled’ starts off with a guitar part that literally sounds like electricity spewing out of control, it’s not shredded, it’s just thick noises chomping away at the air around it. The production on this album is really excellent. When the beat first comes in, I can’t tell of it’s Buford or someone hacking down a tree. Everything this band does is bleak and violent and deeply disturbing. Seems so polar opposite to the two guys on stage at their shows. Tortured souls with good hearts. It feels like The Body watch the world from above and only see the horrors and I really connect with that. As this song breaks down, it contorts into the best guitar part I’ve heard in years. It’s not even clear what’s being played, it just sounds like the instrument itself has come to life and its heart is broken. No surprise though, these are genuinely two of the best musicians on the planet. I’d say the greatest duo on the planet, sorry Lightning Bolt. The great thing is that if you’re just discovering them now, they’re also one of the most consistently spectacular bands you’ll ever hear across myriad collaborations and LPs. As well as being mind-blowing when playing live, not that that’ll be happening any time soon. If The Body read this at any point, please do a live film next with visuals as harrowing as your music, not one of those shitty bog-standard band playing in the same lighting for forty minute deals. Montages and projections and shadows and strobing. All the good shit.

‘They Are Coming’ is as colossal as anything you’ll hear from this band but, the vocals are particularly incredible, I don’t know if it’s the production or the register or if Chip is really just giving it some extra juice but, any fan of the group is gonna lose their shit when they hire the roars that close this song. Fucking sick. The penultimate track on I’ve Seen All I Need To See is ’The Handle/The Blade’, the rhythm is awesome and this track, I do find myself thinking about I Shall Die Here a lot when listening to this album and the samples here and the way the noise is spilling around really add to that. I’d definitely recommend listening to that one if you haven’t already. It’s fucking savage. I like how the vocals are constantly being slapped down on this album, it’s like The Body have finally decided to become art imitating life and say “no, you’re not even allowed to scream or cry anymore, you can only wallow in your misery”. Very relatable.

Unfortunately, ’Path of Failure’ concludes the album. I love the pitch-shifting on the vocals, they should do that more often, sounds demonic. I always figured that the vocals are so high-pitched to cut through how earthquakingly bassy everything else sounds. The cymbal work on this song is really nice too and that ending is fucking huge. I honestly feel like The Body must do a seance every time they set up to play cause what they put out is just superhuman. It sounds fucking gargantuan. The sorrow at the heart of everything they do is enrapturing as well. It really feels like an intoxicating rebellion against the cruelty and injustice of life on earth. You’re born against your will, into a system you did not choose and you’re traumatised for years and the cards keep stacking higher and higher against you and then you die without ever really getting what you want; all so less than 1% of the planet can live like gods.

I’ve Seen All I Need To See is a perfect addition to The Body’s unmatchable discography and its deeply agonising spirit will surely resonate with those of you who feel defeated by 2020. It is also a strong, early-bird contender for Album of the Year 2021.