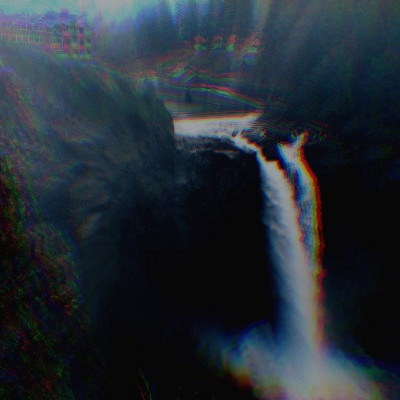 Strange things are afoot at the circle K. Talk of miracles at the 7-11. A convenience store saviour. Or I guess just a tired cashier with long hair and a beard. I’m still split on whether 7-11 Jesus is a dumb name or not. It has that rubbing up of the mundane and the divine about it but it cuts both ways. For a band it at least offers up the promise of some good merch, although current evidence is a little more thrift store if I’m honest with you. Tree Dream is the second album from California indie rock trio 7-11 Jesus and on the far side of a cheap six pack and a bag of Cheez Doodles it might just give you some of that old time religion if it doesn’t squeeze you into a phone booth for a jump back through time.

‘Tried So Hard’ sways in through the door, a sundazed, sing-song, vowel drawl riding a warm thermal of analogue distortion. The tune swings between soaring bursts of half hearted energy and moments of quiet introspection. Its gentle stop start flow a kind of benign resignation, “things that I do won’t add up to very much.” The music feels like the comforts of friendship in a time of limited means, riding in your friend’s beat up car trying to forget the disappointments of the week with music and beer. Appropriately enough the video shows the band in various outdoor sofa situations, drinking from a box of cans. Rolling Rock. In cans. Oh, the humanity.

A couple of tunes later “tried so hard…” recurs as a lyrical hook in ‘Talk Show Host’ the most obvious example of things repeating and connecting in a record full of cycles and returns. The songs are full of sad, sweet, fragmented instrumentation carrying hazy slacker vocals. On ‘Talk Show Host’ the guitar seems on the edge of giving up and stopping. It’s a question they keep turning over, ‘Kill Your Friends’ offers “things move slowly and drift away, I’ll drown in my own decay” which could be the tag line for the whole album, but it’s not as bleak as that might appear, more a kind of autumnal melancholy, a blanket fort retreat.

March 2020 the pandemic kicks in, their studio time is cancelled and the band borrow gear to record this album in their garage. Did a good job too, it’s not garage-rock either stylistically or in that lo-fi, muffled sludge way. The sounds are clear and you sense they got pretty close to what they were going for, the delicate ‘Two Hands’ being a good example. The bass churn and punch of ‘Badman’ is the most noise rock they get but here again the muscular verses drop out to a swaying and fragile chorus. Recent single ‘5HITS’ is up tempo but still sorta lolloping along, the low level chaos of their sound concealing another cunning arrangement. Lyrically it circles around again “what’s ahead was the same as what’s behind” There’s a touch of Thurston about the vocal and just as it looks to be setting into a discordant noise ending it drops instead to a long sweet acoustic coda.

“It is happening again.” Tree Dreams’ cover features a dark and distorted image of Snoqualmie Falls. Best known to you and me as the magnificent waterfall in the opening title sequence of Twin Peaks. Mysteriously the falls never feature in the actual show despite its fascination with the surrounding landscape’s woods and mountains. The recent third season’s concerns with the fluidity of time and characters caught in repeating patterns, to the extent it was titled Twin Peaks: The Return, might be of relevance here though. Or maybe just the 25 year gap. Those mighty Douglas Firs, what do they dream about?

7-11 Jesus is not Twin Peaks music but, as with the show, they use a set of particular sonic signifiers to create a sustained mood. That sound is the early 90’s US underground, from around when Twin Peaks was first broadcast and before the band were even born. The 90’s comes back around a lot lately but mostly with that too-bright, machine tooled, major-label-indie-in-a-very-expensive-studio thing. Thankfully they aren’t that at all but draw on the really good stuff. Apparently the band plans to relocate to Boston where two of them are originally from and this makes sense because they sound a lot like something recorded at Fort Apache back in the day. Not as wordy as Pavement, as noisy as Dinosaur Jr or as acid fried as early 90’s Flaming Lips their sound hangs out somewhere in the deep woods between them. They may not ascend to such heights, and you could call it derivative perhaps, but all those bands had their debts to others too.

There’s a noticeable shift from their first record as well, the sound is less direct here but feels more their own. ‘Soft Brain’ leaps up off the beaten sofa but loses direction before making it to the fridge, getting stuck where the carpet meets the lino. Distracted by a postcard of a waterfall. What was I doing? What year is this? Tree Dream is full of confusion, growing pains and the creeping dread of incoming adulthood. That uneasy blend of still being carefree but increasingly aware of the darkness beyond. Which I suppose is quite a Twin Peaks mood too.

Something else they share with the bands mentioned earlier is an unlikely but deeply embedded trace of country rock that pokes through now and then. Not as story telling but as a melodic thread, its noise a familiar domesticated beast. It’s there in ‘Snakes in the Grass’ and again in the sweet piano and acoustic ramble of ‘Time to Die’ one of two calming instrumentals that close out the record with a shift of mood. ‘Death of a Son’ is the other and although the titles both mention death the music is reflective and peaceful where earlier everything felt on the edge of collapse. Perhaps they’re beyond words.

Tree Dream is a comfort blanket of an album, love for its musical reference points colouring it with a pleasing but not overbearing layer of nostalgia. Get your beers and snacks, find that eight hour youtube clip of Snoqualmie and wrap yourself up in that couch fort, drift into these songs. It might be cut price redemption but it’s not nothing. The world will still be terrifying and in flames when you get back to it. Don’t we call this sort of stuff ‘self-care’ now?